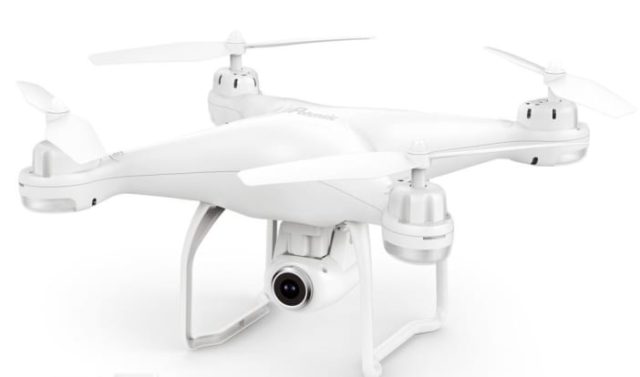 Some people say that the big rivals in the drone industry it’s only between GoPro and DJI. Because only they can make quality drones. Well, that’s not entirely true. The Potensic brand released the T25 GPS FPV RC Quadcopter which can give you a lot of fun with all of his features, as we’ll showcase in this review. It’s a pretty professional machine which can keep up with the bigger names, and it has a big advantage. It is cheaper. Now, you might think that with a lower price comes a lower quality as well. Maybe yes, maybe not. Some say that on expensive drones you only pay for the nametag. If you owe an expensive drone say your opinion in the comment section down below. Let’s help each other with our experiences.

The drone itself can be used by everyone over the recommended age. It doesn’t matter if you are a hobby photographer, a vlogger, a simple dad, etc. . The easy controlling, nice aspect and the good quality camera make the Potensic T25 GPS FPV RC Drone the ideal choice for everyone, as you’ll see in this review.

The drone comes in a white color with four propellers at each side. It has a very useful landing gear to protect the drone and the camera as well from damaging at landings. The drone itself is very small, light and compact. It weighs only a kilogram, so it wouldn’t be a problem to transport it from A to B. And due to its small size, it can be used even indoors just be careful to don’t crash it to a wall.

But if you use the drone outside be aware that it goes 300m far. Which is a really great deal. Most of the drones in his category can go only up to 100-200m far. Due to its size, features and batter capability the drone can fly approximately for 15min and it charges fully only in an hour. But if you buy it with an extra battery you can double the time. More flying time means more fun. The battery is equipped with an energy-optimized system to give you a longer flight time than the usual. Also, the battery can be removed easily at any time. And besides that it’s a great thing to have a battery in reserve, to don’t miss the important and random events.

What’s inside the box?

If someone is ordering a drone the last thing he expects is some unpleasant surprises. Like you don’t get a battery included, or you don’t have the users to manual. To avoid these “surprises” I will tell you what you’ll get in you little package. So after a few days after you ordered the drone, these are the things you will find in the box:

T25 GPS FPV RC Drone comes with a 1080p built-in camera which is the second-best options in the drone category, with one step backward from a 4K camera. With that and the wide field which can be adjusted up to 90 degrees it can provide awesome pictures and videos in every situation. It also has been upgraded to a 9-axis gyroscope so you really don’t have to worry about noisy pictures.

If you want to be sure that your photos are safe and saved you better attach a microSD memory card to the camera of your drone. The memory cards storage space is depending only on you. Just don’t run out of space.

The drone can be used in FPV. I bet all the gamers know that this stands for “First Person View” which means you can watch what the camera sees on your phone which can be easily attached to the remote control. For an even better experience, you are able to attach your phone to VR glasses so you will get the impression of flying. And that can be a really remarkable adventure.

It’s not a lot of things to say about the controller. It is simple as possible, it looks like an Xbox or PS controller. Is very easy to operate since it has easy to press and it has quickly responsive buttons. It also comes with a phone holder for your smartphone which is an important part due to the fact that the drone is FPV so that you can view all the captured moments.

The manufacturers have thought about some really useful features to ensure the safety of your drone. First of all the drone is built with GPS technology. That gives you a precise location of your drone at any time while you are staying in the 300m range. If by any reason you’re not able to see the drone you don’t have to worry. The drone has a button called “return home”. When you press it you give a command to the drone to return to his initial landing point.

The drone has some features that transform your flight time to a really enjoyable experience. First of all the drone is really responsive to the controls, and due to the built-in GPS technology and altitude hold aspect, it can stay stable without any problem.

The drone can be switched to a headless mode. That doesn’t mean that the drone will fly in a random direction. This is a good feature that allows you to fly the drone in any direction without moving his head in the flight direction. Even though it’s easy to control and has these features it’s is hard to control the drone follow someone at a constant speed. For this, the drone is built with a “follow me” mode. With this mode, you can choose a person, even in a crowd and the drone will follow him faithfully anywhere. This is great for vlogs, timelapse videos, and any other sports videos.

Since you have your phone on the remote control you are able to control the drone with your phone as well. You can point on the next direction of the drone on your phone and the drone will fly right there. This isn’t a new feature but is one of the most useful aspects of a done because it gives you a lot smoother video transmission from two places. It is a great tool for beginners and lazy people as well.

I know we talked a lot about how a phone is are a very important part of the drone and how many things you can do with them but there is still one more thing. For example, you don’t have to transfer all of your photos to your computer and then to your phone to upload it to Instagram. If you want to upload a photo taken with your drone the process is way more simple. You only have to download the manufacturer’s app (which is available for both Android and iOs) and you are simply a few touches away to upload your photos on the internet. In that way you always can post relevant content in real-time on the platforms you are present.

Others opinion on the amazon about the drone

“I got this drone for my son’s 12th birthday, arrived quickly, we followed the connection and calibration instruction video, and it connected straight away, no problem! The video quality is good and it is very easy to fly with very little practice.”

Great drone for the money!” – Jon

“Very easy to set up and calibrate. The drone does a great job of altitude hold which makes taking photos and videos easy. Very responsive and accurate to the controller which also charges from a micro USB cable so no need to worry about batteries for that. Drone battery takes about an hour to charge.”

“I’ve probably bought 3-4 ‘drones’ that are in the $100 range. I saw this one and the reviews looked good and with a price of $179 I knew it would be better than previous ones and I was not prepared to buy a high-end drone.”

This thing works great! After just a couple of flights, I pretty much have it mastered and took it off the beginner’s mode. After doing so I started flying WAY higher than I thought I would! ”

As shown in this review, the Potensic T25 Quadcopter is a great drone, with awesome features for an amazing price to excellent people. I know this came a bit cheesy but that’s the truth. For this price, you won’t find any other drone which can do this much things. And it’s a great device for both beginner and experienced users as well.