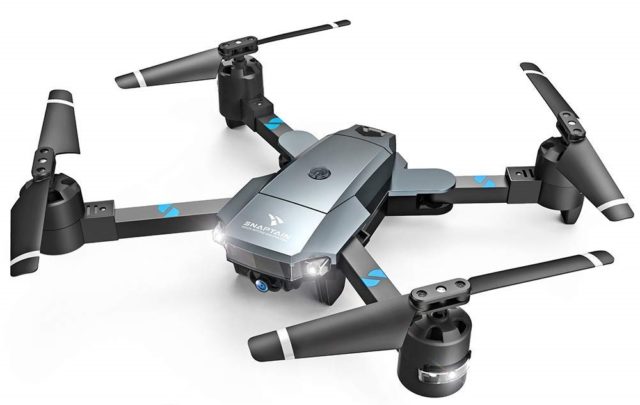 Today we will show you the Snaptain A15 Foldable Drone, which is a great drone that you can get for under 100$ which is a very affordable price. And I can tell you that this little guy is just amazing. Is foldable just like the DJI Mavic 2 Pro which is great if you are going on a trip or something. The drone also has some pretty amazing features like other, maybe even more expensive drones can do, and more. I’m saying that because this drone can even be controlled by voice commands. And besides all of that, it has a pretty amazing design. If you became interested and want to know more stay with us to read the in-depth review of the Snaptain A15 Foldable Drone.

First of all, let’s see the general aspects of the drone so it will be more easy for you to compare it to other drones.

At the moment the drone arrives is already assembled. So, you don’t have to struggle with that or to have a fear that you might assemble something wrong. Therefore, you only need to charge the batteries put them in the drone and you’re all set. The drone is made of plastic but it doesn’t give him a cheap look. Besides, the black color and the aggressive design lines give him a badass and more professional look. The drone is pretty massive, and if you installed the protective guards as well it will surely survive minor accidents. Which will appear pretty frequent if you are a beginner drone user. But don’t worry. After a few hours using the drone, it will be much easier.

The Snaptain A15 comes with a 720p HD camera which can record in 120-degree wide angle. The camera may not be the best but it’s ideal for some photos or time-lapses. And think about that for this price there are so many more drones with even lover quality cameras. This camera is a perfect chose for beginners or hobby photographers and video makers. The FPV aspect of the drone, which means you can see the footage of your drone will help you a lot to shot exact what you want to.

Nowadays the most important things in a drone are his features. Because it’s worthless if you have a drone with a 4k camera if you cant make steady and clear photos with it. It’s very important to have a drone that is stable and it’s easy to use. And besides these, it’s a plus if the drone can do some “tricks”. Let’s see what this drone can do:

This drone is capable of doing 360 degree flips whit just pressing a button. So it’s quite easy to perform it. But it has a  cool effect if you show it to your friends. And it can give a creative way to transition your videos when you’re editing them. Just be careful when you execute it indoor to don’t have the wall too close to your drone.

The Snaptain A15 drone is built whit a “return home” module. This gives you the opportunity to bring back the drone at any time. Having this feature reduces the chances to lose your drone. You only have to pay attention to have the drone in range. You can activate this module by holding the return button for 2-3 second and the drone will return to his initial place where he takes off. To cancel this process you will have to give it another command.

It also has a pretty useful feature called “headless mode”. This is a useful thing for every beginner drone user out there. To enable this feature you have to press a button and it’s activated. After you enabled this on your drone the drone won’t have to face the direction it will go. Having this aspect you can make so much smoother videos.

The voice command. This feature is very unique, and you can control the drone with simple commands like “Landing,” “Go Right,” “Go Forward” and more you cand find all the commands in the users manual. Its a smart feature but it has to be improved, so be ready for some glitches and sometimes you may have to speak louder and to repeat yourself a few times. Therefore I suggest trying this feature the first time when you are alone. Otherwise, people might think you are crazy.

The Altitude Hold is another very useful thing the drone can do. The drones altitude hold is very precise and accurate. This feature allows the quadcopter to hover at the same position as long as you want, or as long as the battery is charged. You just take off your hands from the controlling sticks, and it will stay at the same height. It’s good to take stable photos and you won’t crash it if you let go the remote control

You can even adjust the drone’s speed. This is called “Multiple Speed Modes“. You can choose from multiple speed modes depending on how good you are and handling a drone. If you are a beginner, then you can start with the slow speed, and after exercising a bit, you can increase it higher and higher. And be careful whit the speed while doing the flips. The radius of the flip will vary according to the speed, so always keep a free space above the drone.

The drone can be controlled by your phone via the Trajectory Flight. Whit this you can send your drone to a preset path. You just have to draw the track on the screen on your phone, and the drone will follow it precisely. This is a very advanced feature, however, it’s not easy but if you practice a lot it can be a really useful ability.

Conclusion about the Snaptain A15 Foldable Drone

In conclusion, the price of the Snaptain A15 Drone and the features of the drone are good. It might have some lack if you think about the range of the drone, the camera, and the flight time. So it clearly won’t be enough for a professional video or movie maker. But if you want to buy your first drone this might be a good choice. It’s easy to control, has a lot feature and you will have a lot of fun using it.

If you’re interested you can buy it from: Amazon

Question: Can it use an sd card ?

Answer: No it does not.

Answer:Hi, you can control the phone via the APP you downloaded in the phone or ipad.

Question: How long does the battery last

Question: How far can you fly? What distance is the controller range?

Answer: Normally this type of Wifi drone can reach up to 100 meters-200 meters .the manufacturer didnt provide the range specs.

Question: Does the drone stop by itself?

Answer: Yes it does

Question: Does the A15 drone have obstacle avoidance sensors?

Answer: Hi, the A15 drone does not have the obstacle avoidance sensors.

Question: What batteries do I need to supply?

Answer: Double AA for the remote the drone has its own rechargeable battery

Question: Is a smart phone required to control drone?