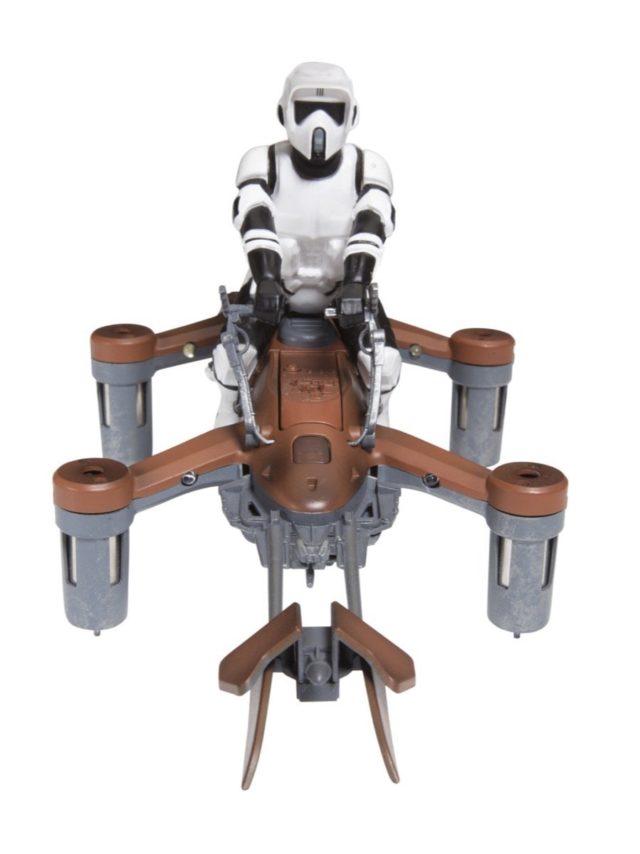 Here you will find the Star Wars Propel Battle Drones Review. This drone is an excellent gift for any Star Wars fan. It is hand-painted droneand looks awesome. You can get the drones as different models: the 74-Z Speeder Bike, T-65 X-Wing Starfighter and TIE Advance X1.

The drone comes with two 800mAh batteries, which can be fully charged in about 40 minutes. The battery life, isn’t to great, you can have around 6-8 minutes of flight with them. It is a very fast drone, reaching a top speed up to 35mph.

The remote control has 2.4Ghz, and according to Propel, it can be used up to several hundred feets distance. Each remote control is themed like the drone so they are in a perfect match. The drones are packed with visible light and infrared light for battles.

There are great drones for beginners, because they have a T-mode, which limits the drone to flight between 50cm and 2m, by using the barometric pressure of the drone. These options make great conditions for practice,

An unusual fact is, that the Star Wars Propel Battle Drones have their propellers down faced, so the drones are pushed in the air and not pulled.

The drones come with audio tracks from the Star Wars series, and these audio tracks are included also in the remote controls. The controller has a small speaker and also a headphone jack. With these sounds, you can feel yourself like in a real video game.

When you are in battle with you friends (up to 23), you will have a life indicator, and if you get hit three times, the drone will land automatically, suggesting that you are out of the game. It is a very good drone for fun.

Each drone comes with a full refund occasion, if the drone is unpacked, and also 90 days of warranty excepting parts that breaks during battles or flying time.

You can find also another type of microdrones from Propel manufacturer.

The Star Wars Propel Battle Drones are a very great gift for any Star Wars fan and not only. You can have great time with your friends, especially when you are engaged in battles with up to 23 friends.

For its price, you will have a miniature drone with impressive speeds and acrobatic abilities.