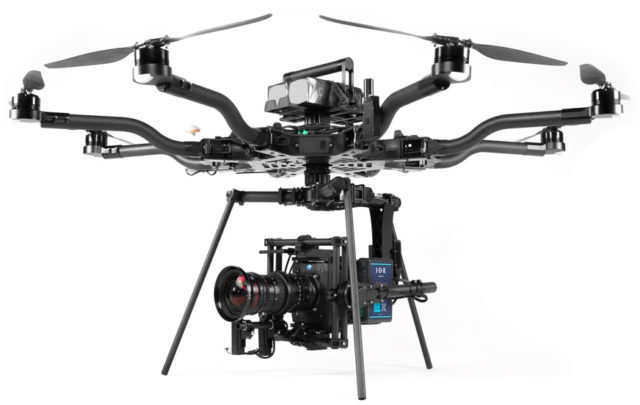 The FreeFly company is known for making awesome devices used in cinematography. And they are one of the best companies if we are talking about cinematography drones. Their drones were used for movies like Deadpool, Baby Driver, Fast and Furious, Suicide Squad, Wolf of the Wall Street, and many other. So my point is they are one of the greatest drone companies in the market and all the movie makers approve that. The company achieved this huge honor after the launch of the MōVI camera stabilizer, which was a real game-changer because it provided a smaller and lighter alternative to the Steadicam. After a little, they started to make high-quality drones as well for the filming industry and now they came up with the FreeFly Alta X Quadcopter.

You might ask that if they are one of the greatest why do they need another drone? They can use the ones they already have, I those was successful the firm doesn’t need another one. Well, that’s the reason why they are among the greatest in the drone battle. They are always challenging themselves to be number one.

At the start of the production, their goal was to increase the flying capability, the maneuverability and to reduce the vibration created by the propellers. So they wanted to create something great, and they did that. The production team want back to the basics to see how are the bigger flying machines work. They studied Igor Sikorsky, Frank Piasecki, Stanley Hiller Jr. and others work who invented something related with helicopters. And if you have a team like this you can be sure they will make something really outstanding. So drone lovers stay tuned because this review will be about a really magnificent drone.

The potential of Alta X

This paragraph will contain a lot of number and specs. So if you’re not interested you can skip this section, but for the real drone lovers: check this out. The Alta X is a huge drone from every perspective. First of all, it measures 1.4m (yes, meter) in his folded form and 2.2m in his unfolded form. Alone weights 10.4 kg and it can carry additional maximum 15.9kg of weight. This amazing performance is possible for the reason that it has 4 motors, and each one of them has a 100A Max Continuous Power Output. You need this power in order to lift one of those heavy-duty cinema cameras connected to a gimbal, plus the lens attached to the camera. But that’s not all you also need durability for a cinematography drone because you can’t change the batteries every 5 minutes. So the drone is attached with batteries that have 44.4V Voltage. And this voltage is enough for 20 to 40 minutes of flight time depending of weight you carry with the drone.

And it doesn’t have only great specs it has a great price as well wich starts from $15,995. But this drone isn’t a hobby or a user-friendly drone like the Mavic Pro 2, which is a really good drone, but it can’t be used in the modern cinematography, so the price of the Alta X is really understandable.

The drone is built in a way that you can mount a gimbal to the bottom or the top of the quadcopter. And on the gimbal, you can place various things depending on what do you need like a camera, a reflector, a LED, a microphone or anything that is needed for quality work in the movie industri. The average flight time of the drone is somewhere at 20 minutes. But equipped with a maximum payload it’s only 10 minutes, and with smaller or lighter types of equipment, the flight time can be up to 40 minutes. And the top speed of the drone is 137 km/h thats why it’s used for action movies so often.

Another thing the drone is so popular among the cinematography drones is that is very easy to prepare. Don’t froget that we are talking about a huge drone that usally takes about 10 minutes to prepare for a flight. But this one takes only 2 minutes to prepare it for the flight. And it can be unfolded to its full size with just the push of a finger. The folding linkages also stiffen the booms to ensure low vibration and precise flight characteristics.

The Alta X is one of the greatest if not THE greatest cinematography drone. The manufacturers worked a lot on it and their efforts paid of. It has great specs, but the fact that it was used for so many movies speaks for itself. The fact that the manufacturers paid a lot attention into this drone can be discovered even in the option that you can change the orientation light color options into 8 different colors. So if they thought about this you can be sure it’s a great drone.