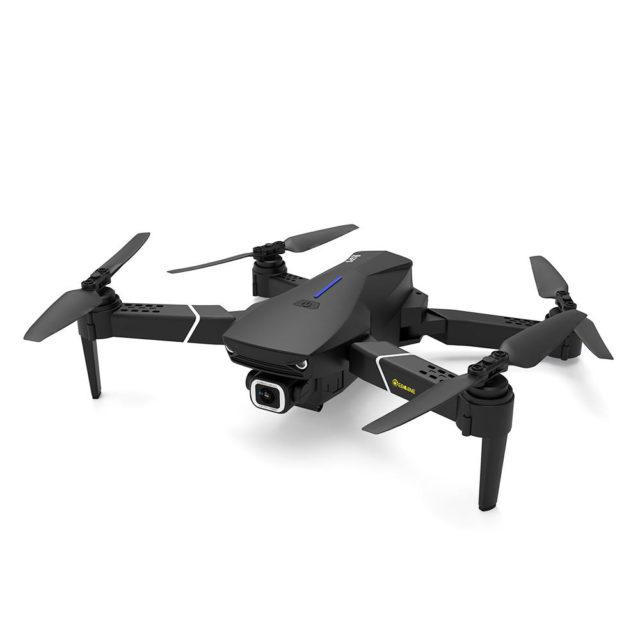 If you’re familiar with the any DJI drone, especially the DJI Mavic 2 and 2 Pro, you are well-aware that they are the most cloned drones on the market. This is understandable as their price is quite high for most people and the demand for copies is quite high. One of these quadcopter clones is the Eachine E520S that we’re about to underline in this review.

The Eachine E520S is a smart camera drone that represents a solid alternative to a large number of well-known drones from the market. Although the E520S is not at the same level as the DJI Mavic, this drone is still a great choice considering its established design and the highly-affordable price. We’ll showcase in this review if the Eachine E520S quadcopter clone is a great choice or not for its price.

The design is one of the most popular things regarding this E520S drone. At first look, it resembles very much of the DJI Mavic 2 Pro but when looked deeper it also features a few unique design elements. Eachine adopted a similar designing strategy with their E58 model, which also looks very similar to the DJI drones.

Similarly to the other drones mentioned above, this one is also a foldable and easily transportable model. It has an overall mat black color with a couple of interesting blue and white details. The camera and propeller layout are also very similar to the DJI Mavic drones, making the E520S a reliable clone.

When it comes to the durability of this flying vehicle, the drone excels at it. The E520S has an impressive lifespan as it is highly flexible and able to survive in the worst crashes. It’s not hard to repair as the spare parts are easy to find online. The foldability of the drone further increases its resistance, making the E520S a good option for beginners that are more prone to crashes.

Although it doesn’t feature performances that are at the same level as DJI, the E520S is still powerful enough. It has a 1,200 mAh Li-Po battery that enables the drone to have a maximum flight time of around 16 minutes on a single charge. This aspect places the drone on top of all of its competition from this price range.

Moreover, this drone has a maximum flight distance of around 300 meters. Although this is quite basic when compared to other vehicles, considering the price range of the E520S, 300 meters is not all that bad. This can be further improved with a signal booster. The flight range combined with its impressive maximum flight time makes this drone clone a reliable choice.

To have great flight experience, stability even in the worst scenarios is required. The 6-axis gyroscope and the GPS / GLONASS module featured on this quad makes it steady and balanced even in the harshest of winds. This is highly beneficial for beginners that don’t have much piloting experience. The drone also has 3 different flight modes that will make a considerable difference for beginners that are still learning.

The camera department represents an important part of the whole DJI experience. It is an important selling-point for the Mavic 2 Pro. Although the E520S is a DJI clone, its camera is not as good as the original one. The drone packs a 1080P HD camera that greatly resembles the design of the Mavic. Unfortunately, the quality is lower, the maximum resolution being of 1080P at best.

The camera is of a high-enough resolution with a decent CMOS sensor that enables it to capture good stills in optimal conditions and videos of 30fps. The camera of the drone is also fixed, which represents a small drawback as you might experience some tilt while piloting your toy-grade vehicle.

The E520S is also an FPV drone being able to transmit live footage directly to your mobile phone. The transmission has a 5GHz speed that enables it to send the video in a lightning-fast manner. This is very advantageous both when it comes to professional content creation but also when it comes to drone piloting and even racing.

When it comes to the features department, the Eachine E520S quadcopter covered in this review shows a lot of potentials. It has plenty of the basic features found in drones at its price-point but also many other top-notch professional features.

The Smart Flight Modes is one of the most useful features found in the drones produced by Eachine. This feature makes the quad intelligent, intuitive and very easy to pilot. It also enables the drone to perform other complex stuff such as Follow Me, Waypoint mode and Surround Action. All these can be performed autonomously by the drone, allowing you to record top-quality footage without doing any work.

The Follow Me Mode is a highly-popular feature in the content creation environment, especially when it comes to sports and other dynamic activities. It will enable the drone to follow all of your moves only by pressing a few buttons. The Surround Action is another useful feature that enables the drone to record a 360-degree video of any object. Moreover, the Waypoint Mode will enable you to record any customized flight path.

The drone is also packed with safety features that can help any beginner to get used to piloting. The drone has an Out of Range Alarm, Low Power Alarm, and Smart Return to Home function, along with automatic take-off and landing. All of these increase the safety of your drone, minimizing the risk of a crash occurring. It also has the two fundamental Headless Mode and Altitude Hold that can make wonders for a beginner.

The E520S model from Eachine that we showcased in the above review represents quite a solid quadcopter and a great choice for every beginner. Although it clones the design of the DJI drones, this model is nothing less than a reliable drone with a great camera, impressive performances, and some useful features. You can easily buy it from Banggood for $105.99 or from Amazon for $149.99.