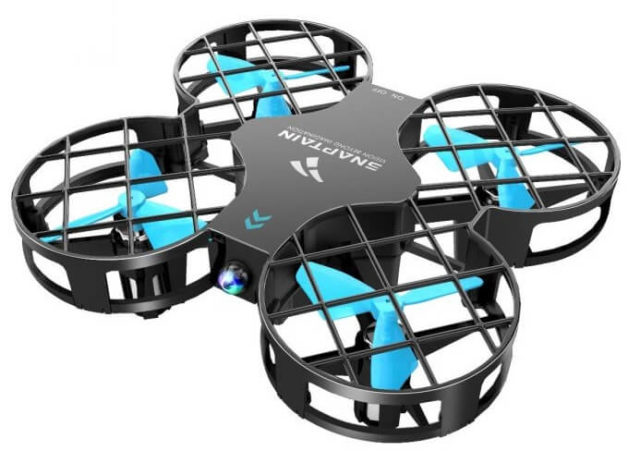 Mini quadcopters are usually underestimated by people but they can be really smart, and by that, I mean that they are capable of the inteligent flight modes that their bigger brothers can do. Basically a mini quadcopter is like a movie trailer. You will get a taste of how flying normal sized drone feels like. And you will know if you want or not to spend 10 times more for a drone. And that’s the first good thing about this little guy, it will cost you only 25$. However, you won’t get a built-in camera like his bigger brother the Snaptain A15. But usually in the case of such drones, the manufacturers build the drone with a 2-3MP camera which is pretty useless, therefore you don’t lose anything. In turn, you will have  a lot of good features.

The drone will come in a white box on what you will have all the things the drone can do. But we will talk about that later. So, let’s see what’s in the box:

The Snaptain H823H comes in jet black coating and you can order it in two colors: Blue or Orange. The drone is built with protective guards. This is really important because this drone mainly is an indoor drone, and this way you won’t break anything in your living room. But in good conditions, you can use the drone outdoors as well. You also has protective guards at the top and bottom of the drone.

So it’s one of the safest drone for kids, you can be sure that nor the kids or the drone will suffer any damage. However for safety measures the manufacturers recomends to use it only if you are at least 14 years old. Also, on the front of the drone there is a little headlight that can provide light so you will always know where your drone is, even in the night time.

The controller is made out of plastic and due to its small size it fits great in small hands as well. The buttons are placed well as well, it’s just like a smaller version of an Xbox or Playstation controller. They all are very intuitive and easy to learn. On the “shoulder” of the remote control there is a button for automated functions, but you can find buttons on the remote to adjust flight trim. There are clickable flight sticks and on and off switches built with a LED.

You don’t need any extra setup for the drone. You only have to set in the batteries in the remote control and in the drone itself. In the remote control you have to insert 3x AAA batteries. And for the drone, you have to insert the LiPo batteries on the bottom side of the drone and to plug into the power plug. The batteries can be charched with the USB cables that are included in the package. Due to the small size of the battery, it will usually run for about 5 minutes and it takes 30 minutes to charge it to 100%.

We know exactly what size isn’t everything that matters. So let’s see what is this mini quadcopter is capable of:

This feature makes drone capable of standing in a still position in the air. Having this feature the drone doesn’t have to be in motion all time, so you don’t need to have your fingers all the time on the joysticks. The drone will fly at the same altitude until you like, or until his battery wants to.

This is great thing that even all the bigger can do. When you enable this drone doesn’t have to face the direction it will go, so he can go left or right while facing front, just like a crab. This characteristic is very useful when you have a camera installed on your drone but you can enjoy it even without having one.

This aspect of the drone shows you that your children can use the safety because you can set the drone to a low speed until they learn how to control the drone and you can unleash the drones full speed.

Others opinion on the Amazon about the Snaptain H823H Mini Quadcopter:

“This is a great pocket-size drone. It’s easy to maneuver and fun for kids and adults alike.

The drone is very sleek looking and I like that it has the propeller guards just in case I bump to the wall.

The remote control is very sensitive and easy to control. Press down the right joystick to make a click sound and activate a 3D flip function, lots of fun and awesome. It’s worth to attention that the LED on the front of the mini drone, can fly in the dark, you don’t worry about that will be lost.”

“This is a nice little flyer that is easy enough for kids and beginners to fly. It has altitude hold and is a really docile flyer. Propellers are completely covered so no losing props or getting hit by them, but they do include an extra set. My 5-year-old son loves it! And he actually flies it well! This is an indoor drone but definitely can be flown outside.”

“it is pocket size, and the battery life is very during considering the size. The propellers were encircled by plastic guards, in this way, it goes fully protected even when it was crashed. There is a nice headlight in the front so you can easily locate on the dark. Anyway, my kids like it.”

The Snaptain H823H Mini Quadcopter is a great starting point as shown in our review. A person who already has a more equipped drone clearly won’t buy it. But for a drone virgin could be very useful, because it’s really cheap and you can learn all the basics with this drone. Also, it could be a very good gift idea for your children. The full-body protective guard ensures you that they won’t break it, and if the drone is set to low speed they won’t break anything in your home.

If you’re interested you can buy the drone from Amazon.