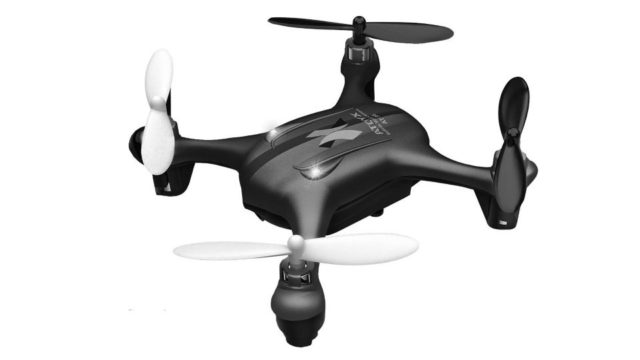 Have ever heard or thought about the statement: “Drones are not toys”. This declaration can be true or false at the same time. Drones can be really different from each other. While one of them is very dangerous for children and you have to fly it only outdoors others can be really harmless and you can calmly use indoors as well. Also, their capabilities can be really different, from the camera, trough safety options, to intelligent flight modes they are all different. Some may have all of them some none of them. So yeah, drones can be really serious machines with a lot of options or they can be some “expensive” toys as well. And the ATOYX AT-96 takes part from the second category. This drone is safe for everyone to use it, and it has some features as well. Let’s all take a detailed look at the drone in this ATOYX AT-96 Quadcopter Review.

The ATOYX AT-96 is a camera drone that features some beginner-friendly flight function. And you can get it under 50$. Not bad huh? The drone can be used for two purposes. One, to learn how to fly a drone before getting a more expensive one, or to buy one if you can’t afford a more advanced drone.

The manufacturers decided to put the drone on the market in three different colors. You can choose from Red, Blue, and Black. This way the drone will be more personalized. The body of the drone is made from high-quality plastic which can survive any minor blast. On the front, you have a powerful LED’s to let you know exactly where your drone is. Also, there are additional LED lights around the motor arms that assist you in spotting the drone during daytime and nighttime. Each motor has a rubbed landing pads to ensure the safety of the drone when landing and on the top has protective propeller guards too.

Thanks for the upgraded propulsion force and improved 6-axis gyroscope the drone is really precise and stable. This allows the drone to fly both outdoor and indoor as well. Indoors you can be sure about the fact that a drone will stay stable and not crashing into a fragile object. Outdoors the stabilization is important as well. You have to be sure that a little stronger wind won’t throw away your little friend, that’s why the manufacturers usually strongly discourage you to take your mini quadcopter outdoors. But this doesn’t apply in our case.

Due to the size of the battery and the drone this aircraft has a flight time of 7 minutes in general, this depends basically on the conditions you are flying the drone.

The remote control is included in the box, and basically the remote control looks like a consoles control, it fits perfectly in your hand’s ant has to joysticks. Like any other FPV drone, this one too has a mount holder where you can hold your phone when you are monitoring the camera’s action through the phone.

Connecting your phone to the drone has a lot of benefits. First, as I told you can see how will be the footage you are making with your done. But it also shows you a ton of info about the status of the drone, like the distance, battery level, you can switch easily from photo to video, or back.

The two joysticks located on right and left sides are used to command the drone’s movement, one of them is responsible for the height and one of them for the direction. But you have more options to control the drone while it’s in the air. You have the trimming buttons for this (the buttons placed on the right side of the drone), with these, you can stabilize the drone with the built-in gyroscopes if the aircraft loses its balance. You also have buttons for taking off and landing which makes your life quite easier. Besides, you have the photo and video options on the screen of your phone you can also capture moments with buttons allocated for this purpose which is placed on the shoulders of the remote controller.

Just because I told you this is a safe drone and can be used as a more expensive toy it can also have some great features which every drone should have. This drone has an altitude hold, which means the drone stays on his place, even if you took off your hands off the controller. This is a basic feature but not having this can be a real pain sometimes. Another feature that comes with the drone is the headless mode. This mode is more for experts and for those who wish to create great content with amazing video effects. For those who don’t know what this feature is, it allows the drone to move in every direction, no matter in which direction his head is. The drone also has switchable speed modes which makes it just a great drone for the beginners. You can start at a low speed, and as your drone controlling skills evolve you can enable higher and higher speeds as well. The other features I already mentioned, the auto take-off and landing capability which you can enable with just pressing a button. You can do that wherever the drone is on a low battery or it starts to go too far from you.

Others’ opinion about the drone

“I am pleased with this Drone. It flies high, easy to maneuver and the camera is excellent. Although remote takes 2 AA batteries, Drone charges which USB port which makes it even more worthed as it won’t cost much to run. Battery life holds up well and it is easy to carry as it is not bulky”

“Having fun using this mini drone with a camera while out and about outdoors with Capturing HD video with great stability, it has got many good features so the price is nothing compared to its qualities. It’s a Fantastic toy if kids playing with it but elders can do more serious work like recording some memorable Moments with a clear aerial view.”

“ This drone is quite good for the price and quite fast and the battery doesn’t last that long but a decent amount and the camera is also all right the drone is quite durable and the app is a little buggy and other than that, everything is good.”

This drone is the perfect choice for those who are not sure about having a drone or not, or for those who want to prepare for a better, more complicated and serious one. It’s cheap and has a lot of safety features so even if you think that you are a noob in flying you don’t have to worry. You won’t damage anyone or anything.

You can check out the price on Amazon.