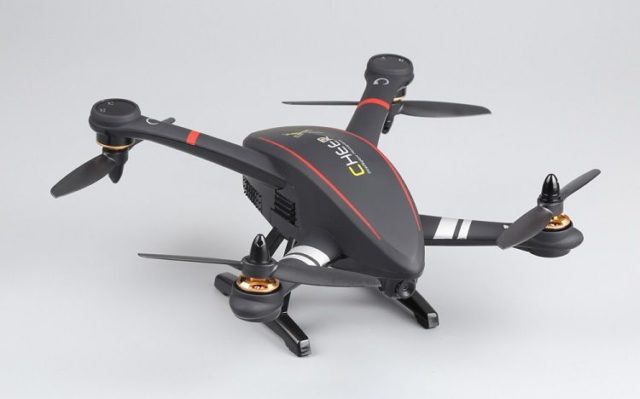 The Cheerson CX-23 Quadcopter a.k.a the “Cheer” is a small but smart GPS camera drone. It has the same size as the DJI Spark, for just half of the price. However, of course, it can do as much as the DJI drone. But for this price range, we can forgive them. But there are even more enjoyable aspects of the drone rather than the price. It has every technology that you might need, it has a cool design, and a good camera. But read this Cheerson CX-23 quadcopter review for a more detailed overlook.

Also, I would recommend you to save the box. It could be a nice way to transport the done or a good place to keep it when you’re not using it. Why do I say this? Because inside the box there is nice foam in the shape of the drone that can keep your precious aircraft safe when you’re traveling.

Before you fly the drone you have to calibrate it. You do this by pressing 10 times the “Mode” button until the screen changes. Then you follow the instructions on the screen. You will have to rotate it horizontally and vertically. Be patient if something doesn’t go as you wish and repeat the procedure until it’s necessary. For your own good.

After you did all the necessary things on your drone you’re good to go. The drone is able to fly up to 13 minutes, which is a nice time and can go as far as 500 meters. Which is not as well, but it can be improved. The drone is quite fast thanks to the D1306 3300KV brushless motors. So they won’t have big problems because of the motors. But talking in numbers, the drone can achieve a speed of 15m/s in normal mode. But when the GPS mode is enabled on the drone, it will be able to fly in 10m/s to ensure a stable flight.

The aircraft is also enabled with some intelligent flight modes. One of them is One Key Return, This feature gives an order to your drone to go back to its original takeoff location with a single push of a button. Altitude Hold, with this feature you enable your drone to hover steadily in a location without you having to mess around with the throttle. And last but not least the Point of Interest, this is a very useful flight mode where you simply point your Cheerson CX 23 to a certain object and it will fly towards it and start flying around and it, taking awesome aerial shots or videos.

As you look at our quadcopter you can notice an interesting thing. The front motors are facing up but the rear ones are facing down. This design both looks cool and is practically at the same time. At the bottom, there is a solid bumper that saves the drone and the camera as well from minor crashes. But you can uninstall that very easily.  Also at the bottom of the aircraft is placed the battery which is removable and has an LED indicator that gives you information about the status of the battery.

However, there are bad sides as well about the drone. Like the camera doesn’t have a gimbal so your photos and videos will be a little shaky and unclear. You can be a really good drone driver but don’t expect that all of your photos will be clear.

The remote works with 5.1 GHz, which works between 2400 – 2483MHz  Frequency, and that is a piece of great news for all of us. You also have GPS functionality, altitude hold, and lots of useful buttons. You have two small joysticks for the Throttle/Steering and for the Elevator/Aileron. You have a Power switch in the middle. And at the bottom, you have five buttons for Landing, Height hold, One-key return, Photo/Video and for Takeoff. The buttons are enabled with small graphics so everything is really easy to understand. But if you’re having trouble finding out which button is which you’ll find a nice explication in the users manual.

And the best part, the control comes with a video monitor. Therefore you don’t have to always connect your phone to the drone to see the camera of the drone. The transmitter and the monitor both have their rechargeable battery separately. As you saw earlier, for all these parts you get a separate charger so you can charge all of them at the same time. The picture on the monitor might be a little glitchy but the footage you’ll have on your SD card will be fine and clear. Under the big monitor, there is a smaller OSD screen with a bunch of useful telemetry data that gives you information about the stats of the drone. Like how far and high the drone is from you.

The Cheerson CX-23 Quadcopter is an absolute hit as showed in our review. It’s cheap and pretty fun to use. The aircraft is enabled with a lot of the last generation smart flight options. So even a more experienced drone user will enjoy it as well as a beginner. The drone looks cool and most of the users are happy with it. The only bad part about it is the camera, which is still acceptable but it’s not the best. But besides that the drone is good and I don’t see any reason not to choose this drone in this price range.