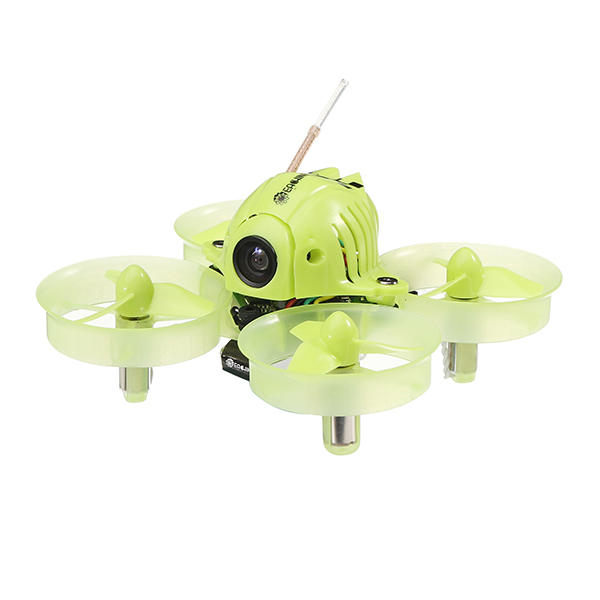 Today I’ll present you a cool “whoop” drone a.k.a small drone. Because the Whoop name is a brand as well. But usually, a whoop drone refers to a micro FPV drone that is used for racing.  They are massive little quadcopters that survive minor crashes during an obstacle course. You may have heard about drone racing but today it’s your chance to try it out yourself. You only need a few things to start your “career”, an FPV racing drone, a universal transmitter, and a cheap FPV headset. But you might ask yourself, why is such a small drone so special. Well, read this Eachine QX65 Micro Quadcopter Review, and you will find out.

There are three versions for the QX65, a basic version with just a basic painting and all the basic parts the drone comes with. A Standard version with extra body parts.  And there’s the advanced version as well with a red painting two extra sets of propellers a white and a yellow set. With matching changeable bodies and 4 rechargeable batteries with a cool charger that works like a power bank for your batteries. And you can charge 6 batteries with it at the same time, which is a great plus. So you get so many extras with the upgraded version. But the interior of the drones, the circuits and motors are the same. So it won’t affect the review. I really can’t tell you the difference between the prices because it changes with every site. But if you’re a real drone fan then you should go with the upgraded version for sure.

This is what comes with the Basic version:

The Standard version comes with:

The build of the three versions is the same, and in each version, the simplicity is the key. They didn’t add any plus part or design, except for the racing flag icon on the top. Which gives him a childish look, and ruins a little the design. But this is only my personal opinion.

The ABS frame, (which can be changed to another color if you buy the advanced version) is lightweight but durable, with 31mm three-blade propellers protected by a flexible guard so it won’t crack. The frame is equipped with a practical battery holder, so you don’t have to use tape or gimmicks to hold it in place. Overall the quad has a Size of 65 mm and weighs 20 grams, which is really okay in the case of a whoop.

The drone also has a camera under the canopy on the front which can be adjusted manually. But don’t force it because in that you can break it if you don’t pay attention.

Because the drone comes fully assembled you can fly it directly as it arrives, without any assemble. But as you observed you don’t get any Remote Control with the drone, so you must own a universal one, which most of the drone racers do. For this, you will have to press the bind button placed under the canopy. You can do this by either uninstalling the canopy and opening it up, or by using a thin screwdriver and reaching through the tiny holes. The Eachine QX65 is based on Betaflight 3.2.2 firmware and comes with a unified F3 Flight controller with built-in Betaflight OSD, which is pretty efficient for a whoop. It also supports three different 2.4G receivers, the Frsky 8CH protocol D8 Mode SBUS, the Flysky 6CH AFHDS 2A protocol IBUS, and the Spektrum DSM2/DSMX protocol.

The drone is a brushless little whoop and can fly really smooth and it’s a real pleasure to use it indoors. You can use it outdoors as well, just check the weather before the flight because it can’t survive the strong winds. The only disadvantage is the short flight time, which is caused by the 3.8v 250mah 30C LiPo battery The flight time is only around 3 minutes, which can be more or less. But if you ordered the upgraded version you’ll be able to fly for a long long time if you change the batteries. Also because we talk about a racing drone that has to fly between many obstacles it’s inevitable not to crash it to something. Not even the pros can avoid each and every obstacle. But this is not a problem for us because this little warrior can survive any minor blast during a curse. It also has a 360-degree prop guard to protect the propellers. But if by any chance you break one of the propellers you have a spare set for that and you can change them and get back to race in no time.

Also, if you fly a racing drone it must be FPV capable because you just can’t use a racing quad without a headset. And this drone is FPV capable of course too, but that’s not all, it has a better camera quality that most of the whoops in his category. Sure, you won’t be able to take photos and videos with it, but you will get a clear live feed from the camera of the drone, and that’s all that matters.

It’s easy to control and to understand, all the beginner flyers will get the hang of how to fly it really fast. But if somehow you broke some parts like motors, propellers, the canopy, and even the battery don’t worry because these parts are easy to replace.

The Eachine QX65 Micro Quadcopter is a good choice for the experienced and the inexperienced drone racers as you’ll see in this review.. If you already participated in such a race then you’ll surely know how to use it, and you will clearly enjoy it. If you haven’t tried out a drone race yet, don’t worry, you’ll get into that easy. The drone comes with everything you need for such a drone, but nothing more. It has a tiltable Camera for a better view, OSD and a great design. The bad part is only the fact that it has 6mm props because most of the fliers prefer a 7mm one, but the 6 one is good too. The other disadvantage about this drone is if you’re a beginner and don’t own a universal controller you must buy one in order to use this one. But trust me, after you buy it you won’t regret it.

If you become interested in this drone to check out the price of the following links: Banggood, Eachine, and Aliexpress.