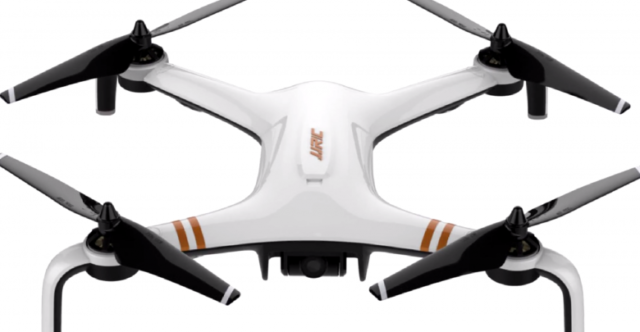 Usually, people think that drones are unreachable and expensive toys, and it’s clearly not for them, because they won’t be able to control it or to afford it. Well, the JJRC X7 came to disprove all of this. The JJRC launched in the form of the X7 a great entry-level drone. It has a really good price-quality value, it has anything you might desire from a drone and also has safety features so even beginners will be able to control it like a pro. But that’s not all, because even the more experienced drone users could find some joy while using the drone because it has intelligent flight options as well. So, nowadays not just super drones from DJI are able to provide quality drones. If you become an interesting stick with us in this JJRC X7 Quadcopter Review

when it comes to purchasing a drone, a very important aspect that any buyer should pay attention to is the packaging. There are many drones on the market, that will offer you a poor packaging without any spare parts.

Luckily, the JJRC X7 Quadcopter has a lot to offer. The first you will see when you will open the JJRC X7’s beautiful box, will be the drone itself. Along to the drone, you will also find, one battery with its USB charger, the remote controller and the user manual. More than that, you will also receive a pair of spare propellers that will help you save good money on the future on spare parts.

So, as we can see this drone has a lot to offer and all of the accessories that come along with it, offers it a strong advantage point against its competitors.

The drone is built with shiny black plastic. The plastic is quite massive but tries not to crash it on your first flight with it. The camera is placed on the bottom. The logo is placed on the top, and quite big, so you won’t forget the manufacturers you got your drone from. Also, there are some stripes on the front arm and the propellers which reminds me a lot of an Adidas training kit. But overall it gives the drone a sportish look. And under each arm, there is a non-removable bumper that saves the drone’s bottom and the camera at landings.

On the right side of JJRC X7 Quadcopter, you will find a micro USB port. The USB port has the main purpose to help the drone user install future upgrades and other tunning possibilities.

The drone has some interesting-looking landing gears. They will strongly protect the bottom side of the drone against scratches. They will also provide a smooth and elegant landing to the drone.

JJRC X7 RC Drone is not a small sized drone, but neither a big one, measuring 28 cms from one motor to another. The drone weighs 399 grams, which offers it a great stability in the air, even in windy conditions. Usually, smaller drones, that have a lighter weight can not be flown outside in windy conditions, because the wind will blow them away. But, this will not represent a problem when it comes to JJRC X7 RC drone.

Another interesting thing related to the drone’s design and built-in is offered by its LED lights. You will find one LED light below each arm. The frontal ones are red, while the rear ones are green. They have different colors in order to help figure out which side the drone is facing. The LED light will not only offer a better appearance to the drone, but they are also a great help for its user in night flying.

The camera is a 1080p one and the angle can be adjustable from the remote control even during your flight to get a better perspective.  Be careful because if you point the camera too high the propellers might appear in your footage. The camera is a curved fisheye camera, which won’t give you the most realistic image but at least you’ll get a wide image. In this price range, almost all of the cameras have this effect. In order to use the FPV capability of the drone, you’ll need a 5G capable phone and the drones App to see what’s on the camera. Or an FPV headset if you own one. All of the footage will be stored on an SD card which you have to insert in the drone. Which is good because you’ll be safe from any wi-fi lag that will be present on your phone.

The Remote Controller that comes with the drone is as simple as possible. It’s small, but not too small so it will fit okay in your hands. You’ll find a button on the top left side which is responsible for the GPS and Altitude hold mode. On the Right you’ll find the Return Home button, so yes, the drone has that too. On the bottom, there are two buttons as well. One for automatic landing and take-off, and one for your footage, to take photos and videos. In the middle is the Power button, and on the two sides of that, there are two little joysticks.

Yeah, you guessed right, those throttles are for the control. There is a small scroll on the left side that helps you adjust the camera’s angle. But if you forget all this don’t worry, the small icons on the controller are very intuitive and you can learn it easily. And last but not least on the top, there is the antenna and a phone holder to get a better FPV experience.

The battery is 2600mah battery It’s easy to remove and gives the drone a 15 minute flight time. And don’t forget that it’s not a LiPo battery so this mah should give more power to the drone. But this depends very much on the conditions you and mode you’re using the drone.

First of all, be careful to do everything exactly how it says in the user’s manual to calibrate the drone in order to get ready for the flight. Then if you download the manufacturer’s App called Enjoy you’ll be able to use the intelligent flight options the aircraft is capable of. You also have a beginner mode which you can enable via the App. On the screen you’ll see the battery status and how far is the drone. The drone can fly up to 350 meters far away and if you’re close to this number the drone will start to beep to show that you’re about to lose control. But in that case, the drone will automatically return to you.

The drone will stay as steady as possible with the double satellite positioning system via the built-in GPS and Glonass systems. The drone also has a headless mode, which you have to try it if you haven’t done that yet. But let’s talk about the intelligent flight modes a little more. First, you have the Follow me mode, which can be quite useful if you want to record yourself or a slowly moving object. On the App, you can select the altitude range as well. You might notice some lag in the movement of the drone but overall it does a good job and it won’t lose the targeted object. Another useful app for those who want to make remarkable footage is Orbit mode. With that, you have to select an object and a distance again and the drone will fly around that object until you tell him to stop.

As shown in our review, the JJRC X7 Quadcopter can do everything a beginner might need and it’s really beginner-friendly too. Although it has a pretty powerful brushless motor you can buy it even if you’re a beginner, just don’t forget to practice a lot, hopefully in wide-open areas. And to talk about the cons as well, it doesn’t have Waypoint mode and the camera isn’t the best. I mean you still will be able to take average footage but you won’t be able to make clear and cinematic videos and photos. But a hobby-level drone won’t need something like that, and you can find enough joy in using just the drone itself.

You can the drone from the following links: Aliexpress, Geekbuying, and Gearbest.