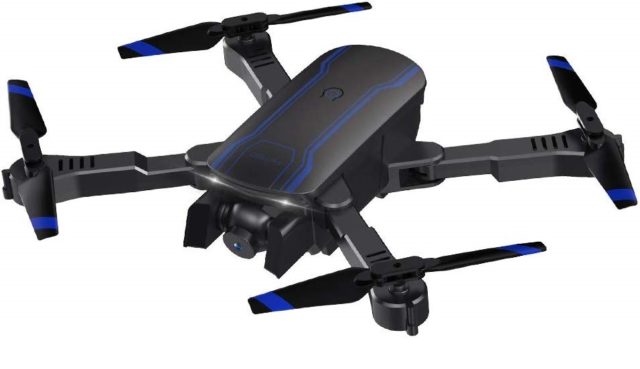 The Akaso A300 from this review is an incredible quadcopter. It’s a  mini drone with a dual camera, which pretty rare in his category. But that’s not all, it also comes with a bunch of smart flight options. All this for under 100$ on Amazon. This drone will be enjoyed by anyone, doesn’t matter if you’re a beginner or a more experienced drone user.

This drone is built for everyone, it has different speed modes for beginners and cool features for the veterans. With all these flight options and the 1080p camera, you’ll be able to make decent footage wherever you are, on a trip, an event or just wants to create something. Read this  AKASO A300 Quadcopter Review to be aware of all the specifications of the drone before you buy it.

This foldable mini drone can fit in your palm when it’s folded. It measures only 12 x 9 x 5 cm. Therefore it’s easy to transport it, you can put it in your backpack or even in your pocket. And you can control it with your phone, so you don’t even need a controller for it. But I will talk about that later in this article. The drone has a black color with bluish details which combination reminds me of a lot of the suit of Black Panther.

This aircraft comes with two cameras as I told you before. One is a 1080p which is placed on the front of the drone. With that, you can take high-quality images and videos. And the second camera is a lower quality camera that is on the bottom and can capture what’s under the drone. Both of the cameras have an FPV ability so you can see a live transmission on your phone. You can easily switch between the two cameras, so you can capture exactly what you want. The app where you can use the FPV is available for both Android and iOs. The range of the app is limited to 35 meters which are kinda little, but it’s better than nothing.

With this drone, you will get a 3.7V 500mAh Lithium-polymer battery. The capacity of the battery is small, but due to the small size of the drone, you still get 12 minutes of flight time. This time can be reduced by a few minutes if you fly in a strong wind, and use the intelligent flight options. The batteries can be charged in 90 minutes, in the case of bigger drones this time can go up to even 4 hours, so you’re lucky to have this small amount of time to charge up the battery.

The remote controller is made simple as possible, it’s made out of cheap plastic but still has an ergonomic and nice feel in your hand. In order to get the remote working, you need to place in 3xAAA batteries. The range of the controller is 60 meters. Usually, these mini drones don’t have such great ranges as normal, bigger drones. On the front you have two buttons and two throttles, also under the foldable phone holder, there are some LED indicators.

And in the place of the triggers, there are the photo/video mode and the emergency landing. The phone holder is universal and adjustable after you’ve downloaded the manufacturers’ app you should be able to see the live feed provided by the drone’s camera. But you can even use your phone to control the drone.

Usually, you don’t expect from a small drone like this to have a lot of features like a Mavic Pro. Well it doesn’t have as much sensor as a DJI drone, but it’s still impressive how many things can this quadcopter do.

Whit this feature one you’ve decided the height that you would like the drone to fly at or just use the default height. You can lock-in that height and then you can fly the drone all the time at that height. This means you do not have to worry about the vertical flight of the drone, so you will be able to make clear footages wherever you go.

When you engage the headless mode you don’t have to worry about whether the drone is oriented. The aircraft will fly in the direction you want without moving his head a specific way.

This is a popular and useful feature not for juts beginner. Nowadays more and more drones come with it because it’s so useful. After you prepared the drone for the flight you can just hit the one key takeoff/landing button and fly. Also when you’ve done the flight you just simply hit the landing button and drone will smoothly land down. You also have a button for an emergency landing. Use this when the drone is going out of range or when the battery is going out and you’re not sure whether the drone will be able to make it home or not. You just press the emergency landing button for 3 seconds and it will automatically land.

This one isn’t a useful feature, but it’s really fun to use it. After all, drones should be fun to use. When you press the button dedicated to the 3D Rolls the drone will perform a 360-degree stun. The drone can do this in all directions, left, right, front and back.