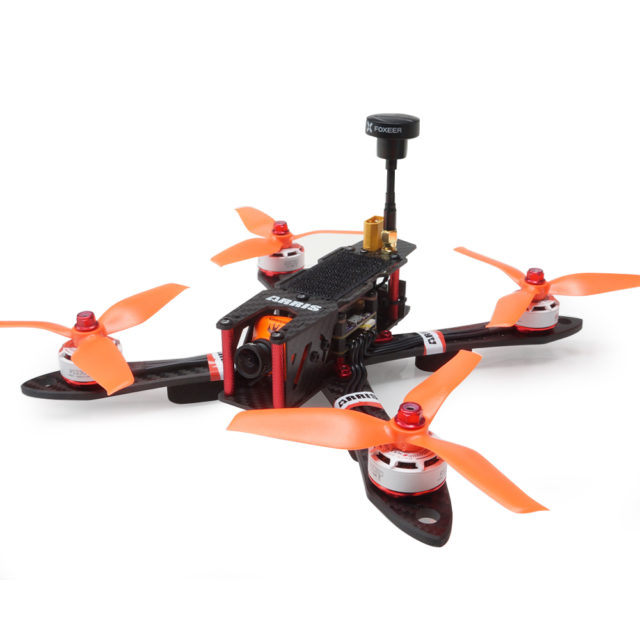 Usually, drones are flying devices that you can take photos with. But not anymore! Drones are also made for racing, at the end of the decade there are plenty of drone racing events.  And if you wish to compete in one of them I especially recommend the Arris X220 Pro. It’s fast maneuverable, and you need both in a drone race because the tracks are full of obstacles. So the speed isn’t everything you need to have. You also need good skills and a pair of FPV goggles because the drone racers are competing with such devices. If you want to find out more about this awesome aircraft read this Arris X220 Pro FPV Racing Quadcopter Review, and become the best drone racer.

Like in the case of most of the racing drones you don’t get a controller in the package. You should use your own from Radiolink, Frsky, DSMX Pro or Flysky. Because these are the options for this drone.

Carbon fiber, open you can see all the cables, battery strap on the top, tightly built together, foam on the bottom.

Overall the drone has an open design. Which means you see everything that’s in the interior. This design isn’t unique but it looks really dope. Some other drones have this design, like the KingKong 90GT. The drone has a massive carbon fiber base which is durable and won’t crack in the case of a minor of a major crash. But just because of this don’t try to crash the drone on purpose. Some other parts may crack. You can see all the cables going from the body to each of the motors. They are held there by a sticker and it good as well. On the top, there is a strap where you can hold your battery. And on the bottom, there are a few foamy parts that will protect the drone when it’s landing. This way all the important parts won’t be damaged.

Also, the blades are made in a special way, their end is sticking out, and this improves the drones’ speed. Also, they are made very sharp, so when the motor is on, don’t even try to touch the propellers.

The camera on the drone is a Runcam Swift 2 FPV camera, which does great work. The Runcam Swift 2 weighs only 14 grams, has a 130-degree angle field of view. You can use your FPV Goggles as well with it and you will get a clear image. The angle of the camera is adjustable. But there’s more, with a bit of creativity and a few craftsmen skill you can put on top a more high-resolution camera as well. Like a GoPro Hero 5 Session. Or anything that can fit on the front or on the battery. This way you will be able to create amazing shots besides having fun while flying around the drone.

Setting up a drone isn’t the easiest part but if you follow the instructions you can do it without a problem. You will have to install the battery and the chip for the receiver and then you can move to the software part. For this, you will have to access the Beta Flight to set up every technical part of the drone. You can also choose the role of each of the buttons when you configure the drone.

Bruh, this drone is really fast. You will be amazed if you try out a punch test on this powerful aircraft. It’s like you’re throwing a rock in the air, but faster. And this is available in all the directions. So with a bit of training, you will be the best drone racer in your neighborhood with this drone.

Some brave owners tried out a crash test on this drone, and the result is… great! The drone survived without a scratch. If you don’t believe you can try it out for yourself. Of course, you don’t have to crash it all the time on purpose, because after some crashes it might be a bit damaged. But if you’re in a drone and you hit an obstacle you’ll only lose speed, not the drone, which is good news.

The Arris X220 Pro FPV Racing Quadcopter showed in this review it’s a well-built drone with amazing motors. It has a durable frame and it was made in such a way that all the internal components are safe. However, it has a bad thing in the build which is the absence of a press button channel switching on the VTX It also has other safety features, so the drone will start to beep if you’re going out of rage, of the battery voltage is really low. This way you can take precautionary measures in such cases.

If you’re interested in purchasing the drone you can do it from Hobby-Wing.