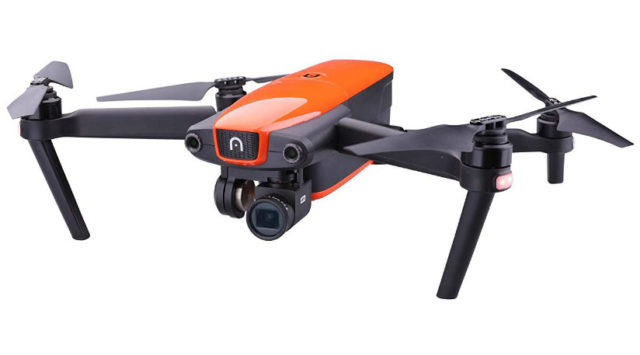 Being a vlogger, YouTuber, Filmmaker nowadays is really hard. Not just because you have to create amazing content often but because you have to choose from a lot of amazing techs and gadgets. In the past few years, the drone industry had spectacular quality growth. Back then there were only two major companies who produced quality drones, the Mavic and the DJI, and basically you had to choose between these two. But now, there are more and more drones, and in some ways, they are better than the products from the companies mentioned above.

One of the greatest inventions is the Autel EVO 2 Quadcopter which produces crisp and clear 8K footage. While most of the drones are stuck in 4K, this drone has changed the game. I know that they are other drones that are able to produce 8K videos, but they are a lot heavier and bigger than this one. It might not be the best looking and most intelligent drone, but you can make the best footages with this one.

This a foldable drone, while a few years back it was a big deal to have a foldable drone now it’s something like a standard to have foldable arms on your drone. It’s easier to travel with such a drone, however, it’s not a pocket drone like the foldable Mavic Pro. The drone’s quite heavy, and it might cause you some difficulties carrying it around. The drone comes in a bold orange color, it’s not the most elegant colors but it’s a cool one. You may have seen a lot of sports cars in that color and they look pretty good in that color.

And whether it was a good aesthetic choice or not at least it will be harder to lose it and not to observe it on the ground. Also, the shell is made out of plastic to reduce a bit of weight. The second interesting aspect of the drone is the placement of the arms. Because the front arms aren’t placed right at the front of the drone but somewhere in the middle. When you rise altitude it won’t influence your flight experience at all, but when you go forward and the drone tilts a bit forward it will have better aerodynamics and it will go a bit faster.

The obstacle avoidance of this drone is just amazing. You have sensors on each and every side. And not just one, but two cameras. That means you have a total of 12 obstacle avoidance cameras on the drone (2x on the front, back, left/right side, top and bottom). So if you manage somehow to break the drone, then you maybe shouldn’t touch any drone ever again.

Talking about concrete metrics it weighs 1127g, so it’s more than a kilogram. Therefore, you definitely will need FAA registration for that.

The drone has a built-in 8GB storage, but to process those 8K videos it clearly won’t be enough for you. Luckily on the side, there is a slot for a microSD card where you can upgrade the storage to 256GB. Also, if you’re not so much into tech be aware to buy a high-class card with a high data transfer rate.

The controller is a small but detailed device. It’s quite smaller than a usual controller, but it fits just right in your hand. On the sides, you have the joysticks and in the middle there is an LCD screen, to show you all the useful info about the metrics of the drone. Of course, you also have different buttons as well for the flight modes. And like any other RC, you have a phone holder to follow the live feed of the camera.

The manufacturers also thought about the ones who have a bit older phones because in order to connect to the phone you don’t need a 5G capable Wifi phone, you can connect to the phone via a cable. So until the phone producer companies don’t make fully wireless phones you can enjoy the glitchless and stable live feed on your phone.

If the specs of the camera haven’t amazed you then watch this out. First, the drone can fly up to 40 minutes with a single charge of the battery. The battery is a 7100mAh one. This should be amazing only by itself, but when you think about the fact that it weighs more than 1Kg, and other drones that weigh only half of that are able to fly 15-20 minutes you really start to admire the manufacturers. The drone comes with the ability to fly up to 9km range with a 45mph speed. Pretty amazing, right?

The drone doesn’t have as many intelligent flight options, only the basics you need to have for an easy flight like the return home command, altitude hold, etc. But if you want to have orbit footage about something you have to perform it yourself.

The Autel EVO 2 Quadcopter camera and tech are simply amazing. They didn’t come up with the best design, or the lightest drone. But as soon as it doesn’t affect in any way the quality or the flight it really doesn’t matter. Also, this is just a subjective opinion, maybe a few of you like those factors. Anyway, if you can afford a drone-like this and you’re able to control it as it meant to be, you clearly won’t regret having this aircraft.

With a range of 9Km, a clear 8K camera you will be able to create amazing footage about anything you are with. Darkness, distance or flight time won’t be an enemy to you anymore. The only question about the drone is if they could have good marketing to beat the leaders of the drone industry. It really has the potential to, but nowadays it’s all about good marketing. Let’s hope for the best.