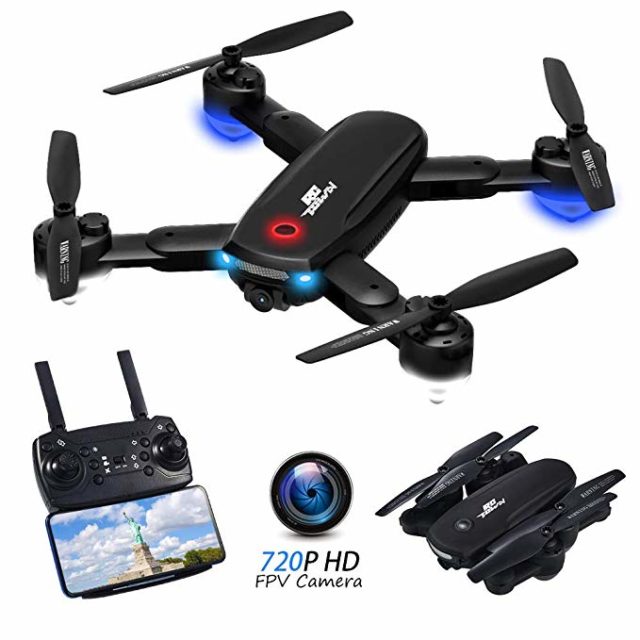 Looking for a good affordable drone? You’ve got it! The RCtown R10 is a very special quadcopter that you can get under 100$ and we’ll review it in here. It’s able to do a lot of things, and still, it’s beginner-friendly. So if you’re at the beginning of your “drone career” and you look for an affordable drone then this is made for you. But before you buy anything read this RCtown R10 Quadcopter Review so you won’t get any unpleasant surprises.

This is a well-built aircraft, it is foldable and it’s made from nice material. Even when it is unfolded it doesn’t take too much space, it only measures 11 by 8 by 3 inches. When it is folded it measures only half of that. You can carry it even in your pocket, but you can safely carry it in your backpack, you don’t need a professional case with foam in it. It weighs only 154g so you will not need to have an FAA registration.

It feels stiff in your hand, thanks to the strong plastic made from ABS. which has been used for the exterior casing. Overall, the drone has a stylish black color with a few details, like the logo on the top. It also has flashing LEDs under the arms so you won’t lose the drone in the night time, and also you will know about the orientation of the aircraft.

The camera of this drone is a 720p one, with a camera like that you won’t be able to make the most amazing shots, but it’s a good starting point. After all, this drone is more like a training one, so don’t expect amazing footage. Besides this, you can use the FPV feature on the drone as well. The FPV works on 5GHz WiFi frequency, which means you will need to have a 5G capable phone in order to follow the live feed of the drone. The real-time video transmission is kinda stable, but be aware to stay in range.

Also, you can store your footage on your phone or on a memory card which you have to insert in the drone. I highly advise you the second option because having your phone as the main storage keeper can cause you some difficulties. First, if you go near the drones range which is only 100 meters your footage will be glitchy because of the low signal. But if you store it on an inserted SD card that won’t happen, also, with all the apps and anything the space of your phone could easily run out of storage and then your work is gone.

This is a well-built, classic looking remote controller that uses 4xAA batteries. These are not provided, so you will have to get them on your own. The remote controller connects to the drone on the 2.4GHz frequency, which is very stable and is hardly disrupted by any object. Also, it has a smartphone holder on the bottom so you easily follow the feed on your phone. But that’s not all you are also able to use it as a controller if you downloaded the app.

The joysticks are responsive without being too sensitive, so even a beginner will use them well. At the same time, every button on the remote controller is placed well and enabled with small icons so you will know what it does. In order to pair the controller with the drone, you will have to turn them both on and then  push up and then push down both of the joysticks on the controller to match the frequency

You will get a 3.7V 1800mAh Li-Po battery with this drone. This is a modular battery, so it is safe to use it. This is going to give you a flight time of around 20 minutes, which is not that worse, there are drones that are more expensive and are capable of less flight time. Also, with economical usage, you can extend this by 1-2 minutes. The charging time is a bit long because it’s around 2.5 hours.

But if you feel that the flight time is not enough for you and you don’t want to wait more than 2 hours for another 20 minutes of happiness, then feel free to buy an extra pair of batteries. It is easy to insert and remove from the drone, and it doesn’t require any unscrewing or anything like that. You should charge it using the provided USB charger only, which ensures the long life of the battery.

But that’s not all, it’s also has some interesting intelligent flight options:

Engage the Follow Me Mode and have the drone come after you or a selected object whether you increase or slow your speed (until a certain speed). This mode is very handy for capturing your moments when you perform any sports activity, or when you are taking a road trip. Sometimes it might be laggy because it’s sensors are not that advanced but it’s better than nothing.

With this feature, the aircraft will lock a specific height and will stay there so you just need to fly the drone horizontally. This is a beginner feature that included ensuring you do not fumble when keeping the drone in the air. But it’s a useful feature too which is used by professional video makers as well.

Another very useful beginner feature which will make your life easier. Just press the button and the drone takes off. To a certain height and it hovers there awaiting the next command. You can use this feature to execute a landing, so you make sure you won’t land too fast to break the drone.

For this one, you have to have the app on your phone and connected to the drone. On the app select the feature and then draw a flight path on a small map, that you would like the drone to follow. When you launch the drone, it is going to fly at that route. Be careful to have the drone always in range because otherwise, you won’t be able to control it.

With headless mode engaged, there is no need to worry about where the head of the drone is when you cannot see it. It will automatically realign itself to the position of the person holding the remote controller when you press the button.

The statement you get what you pay for is not true in the case of this drone. Because you can get it for a really low price, and for that price, you will actually get a lot. If you’re interested in the “drone business” then you will have enough money to get a better one. But with the RCtown R10 quadcopter from our review, you can learn all the basics you need to know in order to get a better one.

If you’re interested you can order yours from Amazon.