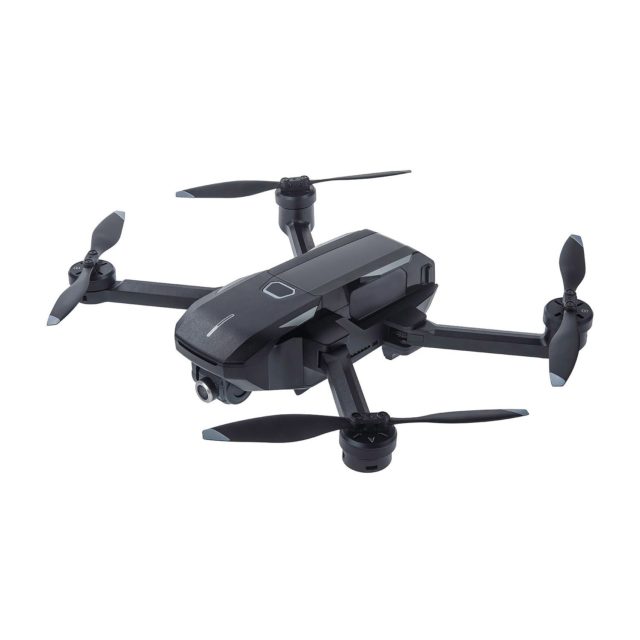 The Yuneec Mantis Q is a Vacation type camera according to their statement. What does this mean you might ask ?. Well, it means that’s a very small drone that won’t take up much space in your backpack. Also, it has a pretty good camera and a lot of intelligent flight features to maximizes the camera’s capacity and to help you make better footage even if you haven’t used a drone before. Therefore it’s a perfect device to record all your beautiful memories home or abroad. If you’re curious what does this mean exactly read this Yuneec Mantis Q Quadcopter Review.

Everything in the box is packaged in a separate little black box which gives you a feel of elegance and quality. Here’s a list of what you will find in those boxes:

The drone comes in a practical foldable design, which allows you to transport it even in a small place in your backpack. The Yuneec Mantis Q was made out of a combination of plastic and metal, so it can survive minor crashes. The drone comes in a dark grey color which looks really great. On the bottom of the drone, there is an optical flow sensor for a better flight and also two ultrasonic sensors as well. On the sides, you got a USB C-type connection and a place for a microSD card.

The drone weighs 485 grams, so it’s heavier than you think. At least I didn’t expect such a small drone to be this heavy.  However, it’s still one of the lightest foldable drones out there.

Unlike the DJI Mavic 2, which has a gimbal stabilization this one has only a soft stabilization. And that too only at 1080p, at 4K you don’t have any stabilization so if you shoot in 4K you should fly the drone really slow and steady. But at least you have the possibility to shoot in 4K. The camera is enabled with a 1/3.06” CMOS sensor and the angle can be adjusted remotely from -90 to +20 degrees. Also, you might observe a little movement from the support of the camera, that’s not a gimbal, that only absorbs the shock generated from the motors.

As we mentioned before the footage is stored on a micro SD card. And surprise: you got a 16GB micro SD card included in the package. Which should be enough for you if you have only one battery. You can transfer the images and videos via the C-type port or the micro SD card. However, I recommend the port, because you can damage the card.

The controller has a nice and clean design. The RC has a nice touch and it fits really great in your hands. You will find on the controller two joysticks, buttons for different features and some LED light indicators. Also, the Remote Controller has a phone holder as well which is adjustable so it can support all kinds of mobile phones.

The aircraft comes with a removable 2800mAh Li-Po battery which can give the drone 33 minutes of flight time. But in reality, you will reach the 33 minutes if you just hover the drone in one place. When you use the drone at a high speed or you use some of the features the flight is reduced to around 25 minutes, but that is a good time as well.

Most of the can be accessed only if you download the manufacturer’s app called Yuneec Pilot. With this, you will get the FPV and other cool stuff to entertain yourself. One of the coolest features of this drone is the voice command. You have certain commands that the drone can respond to, it’s not Artificial Intelligence to react to everything. For example, you can say “wake up” for the drone to power on. But you also have other commands like “Take off”, “Take a photo/video” “Take a selfie” “Have it land”, etc. for some of the commands the app will ask for your confirmation.

With the app you also have Journey mode, this is quite a unique feature and can be really useful if you wish to make interesting videos. Basically with this feature, the drone will go up backward in the camera’s angle. So the object or person you wish to capture will always be on the screen. You also have a Point of interest a.k.a. POI, you might’ve met with this feature under the name of Orbit mode. With this, you select a certain object and the drone will fly clockwise around the selected object.

You can adjust the distance and the speed in this mode. Also, you have visual follow, this includes follow me and watch me. The follow-me mode is quite easy to understand what it is, and the watch me means that the drone will stay in one place, and will move only his “face” towards the selected object.

The drone is very responsive to all of your commands. And besides that, we don’t talk about a GPS drone it’s quite accurate and moves well. Overall you can fly the drone in 2 modes: Angle mode and Sports mode. In angle mode, the drone can move in 14 mph, which could be useful if the space you’re flying the drone is crowded with trees and other objects. Also, if you want to make nice and cinematic footage use this mode. The Sports mode can let you fly up to 45 mph, which can be sometimes dangerous. If you want to use this feature make sure that nothing is near you that can be damaged or can damage the drone.

The Yuneec Mantis Q from this review is a really great quadcopter, it works perfectly even if you’re just a beginner in piloting a drone, or if you’re an advanced drone user and filmmaker. The picture you get from the camera is really sharp and nice. All the features are just there to make your time with the drone just more enjoyable and fun. If you’re looking for a good drone at a good price then this might be your drone.