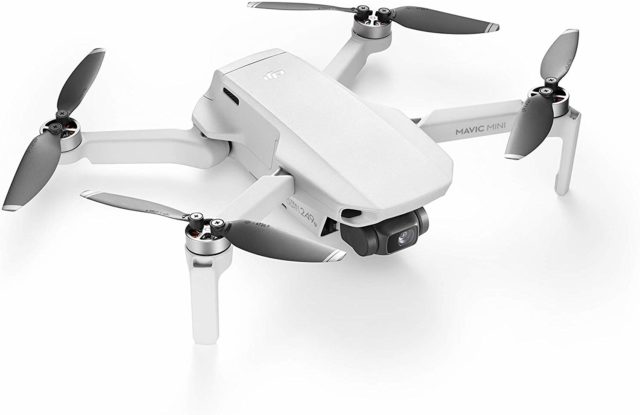 The DJI Mavic Mini is a flying camera that’s why it’s called Flycam. Due to its design you can bring it with yourself every time, everywhere. The drone has a very practical and light design so you can transport it even in your backpack. Also, this drone is user-friendly so even if you haven’t piloted a drone before after a few hours you will fly this thing with a lot of confidentiality. However it’s not a drone, it has some serious features which makes it possible for the user to make some really cinematic videos and incredible images. But if you stick with us you will find out more about this quad in this DJI Mavic Mini Quadcopter Review.

If you ask me I think it’s worth buying the Fly More combo. For an extra  $100 you will get two separate batteries, not to talk about that carrying bag. But if you feel like you won’t take advantage of these extra parts then stick with the standard option.

As I said in the introduction the drone has a really compact design. When you fold it’s only 130 mm long, 80 mm wide and 60 mm tall, so it’s not much bigger than a really thick phone. De drone measures under 250g, so there’s no need for FAA registration. That’s why it’s perfect for the hobby drone pilots.

You may see two sensors on the front but those are not obstacle avoidance sensors. This drone doesn’t have any obstacle avoidance technology. However it still has a downward sensor that helps you in landing, it scans the surface and when it’s near it slows down a bit, not to damage the body.

As for the aesthetics, the drone is quite simple which is really good. I’m a really minimalist lover so I’m all over the simple designs, “the lesser the better”. However, if you want a more extreme looking drone, to be easier to identify your drone we have good news. DJI released some Skins for the drone, they are customizable and will give a little extra to your drone.

The DJI Mavic Minis app is called DJI Fly, it’s very similar to the regular DJI GO app that we are used to. However, there are some differences. DJI added some extra features to the FLY app, to be even more beginner-friendly. For example, it has tutorials on it, with those you can learn all the dos and don’ts when flying the Mini. You will get some useful tips on how not to crash the drone. Also, there is a cool editing feature to the app, with that you can add transitions between your videos, it has faded, you can add music or a text. All of that on your phone. At first, it might seem hard, but with a little practice you can be a pro, and you can become the king of social media.

Let’s talk about the most important factor of the drone, the camera. It’s a 12MP camera with a CMOS sensor and a 3 axis gimbal. Just the things we’re used to from DJI. The camera can’t do any 4K videos but it’s able to capture videos in 2.7K and 1080p which is just perfect. A large number of the videos are watched on the phones and most of the phones are not even capable of 4K videos.

As for the flight experience, the drone performs really well. Just like any other DJI product it has powerful motors, so powerful that It flies really still even in the wind. As for the intelligent flight options, it has some, like the orbit mode, and some others but it doesn’t have nearly as much as a Mavic 2 pro or a DJI Zoom 2, it has no hyper-lapse, and it built with fewer camera settings. It has just the necessary, nothing more.

The Mavic Mini Quadcopter from this review is one of the cheapest from DJI. It can do a little less than a Mavic 2 Pro or a Zoom 2. But for a price like this, I think we can forgive them. This is a perfect drone for those who want to try out how it feels to fly a drone. It’s really beginner-friendly and I can only recommend it to everyone who desires to buy a drone.

If you want to buy it you can do it from the Official DJI Store.