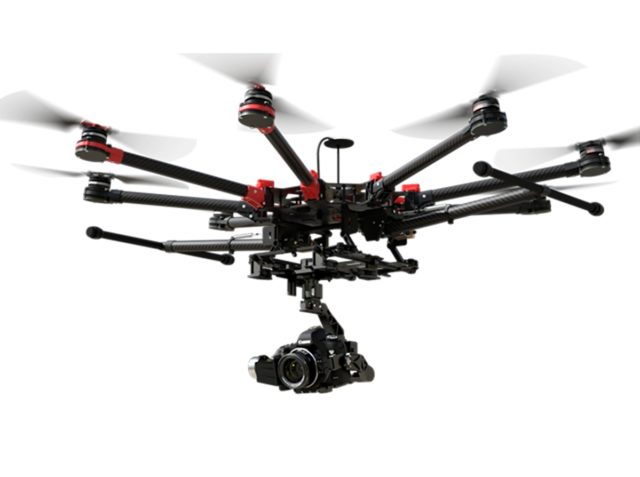 You might’ve seen a lot of drones here on this site. Small drones, big drones, we even showed you other drones with more than 4 arms, like the YUNEEC TYPHOON H PRO which is a pretty good drone, but this octocopter has no match. This drone is a whole new level, it has powerful motors, room for a lot of accessories and everything a good photographer or video maker might need. So if you’re not really into professional drone stuff or professional photography that this DJI S1000 Review, might not be for you. But you’re still welcome. Let’s see more precisely what this beast can do.

What’s in the box a.k.a. The standard kit

This drone is 24x12x24 inches and a total weight of 9.5 pounds. However, the shipping weight involving the packaging takes this up to 20.2 pounds, so you will get a really nice package. Like the previous octocopters we review from DJI, the design of the S1000 octocopter isn’t that impressive. Unlike the sleek forms of other creations from the company, this aircraft looks very basic and simple. It has carbon fiber frames that retract, and pretty much that’s everything exciting. The black carbon fiber frame is completed with red details.

All the arms are foldable, so it’s easier to travel with it. I didn’t say it was easy on purpose because this is a big device even in his folded form. Also, to unfold this done is a 5 minutes procedure. You won’t need any tool to make this thing ready to fly, you just need a bit of patience. This is a high quality and powerful drone which means it needs to be stable. Just like any other drone, this one has LED lights as well to let you know which is his front and the rear side, in the dark.

The drone has eight different spots where you can insert additional equipment or accessories including: main controller, iOSD, Lightbridge, and other accessories.

This a camera drone, however, it doesn’t have a camera. This is because this device is so professional that you can attach pretty much any camera, like the Canon 5D Mark II or the Mark III which is one of the heaviest DSLR cameras. This is good because different movies or video makers prefer a specific brand. They differ a lot from each other and if you got used to one it’s hard to use another one. So this aircraft gives you the freedom to use whichever camera you want. The drone offers smoother aerial photography and the best part is that the copter is able to fly with these heavy cameras for the best shot.

Besides the strong motors that can hold any camera he octocopter is equipped with the Zenmuse Z15-5D 3 axis gimbal that keeps the camera in position, giving you precise control from the ground, clearer footage and access to the recorded videos. Also, the Zenmuse Z15-5D can be adjusted with a wide range of angles.

One aspect of the copter that has really made it popular is its incredible flight time. Because this beast can fly up to 15 minutes. This can be attributed to the fact that the drone is powered by a Li-Po battery of 15000 mAh, which is a good choice for a drone like this. This time period won’t be enough for much but if you buy this drone as a company you more than sure will buy some spare set of batteries as well. And if you look at things that way you will get a pretty decent amount of flight time.

The flight time depends, of course on the weight of the drone for take-off which is influenced by the camera or equipment used. Usually, it starts with a weight of 6 to 11 kg and the maximum power consumption during a full flight should be 1500W. At some point, a total hovering time of about 20 minutes was recorded (over the accepted 15 minutes) without any weight or special feature.

If you’re an experienced drone pilot, you know that the best controller is the one that only improves the flight experience, not makes it harder. The drone must be responsive and your controllers command. Also, it must be able to maintain the connection at all times. The most recommended controller for this drone is the A2 flight controller. Its strengths are the high rate of reliability and stability. The drone also works pretty well with the DJI WKM flight controller which comes with: a power monitoring unit, a Built-in the damper for clearer photographs and an Intelligent Orientation Control.

The DJI 4114 400 kV motors which are built on this drone are ideal for the users to move it around at will. The motor is so strong and powerful that even if the weather is not the best on a particular day, the S1000 will give you a good enough performance, even with a camera attached to it, so yeah, it’s pretty powerful. This model is meant for professional photographers and videographers who need a clearer view from an elevated position, so a powerful motor like this is a basic thing for them. The octocopter is well equipped to reach 1000 meters from its take-off position.

Pilots who are looking to move up in the world of unmanned aerial vehicles might enjoy this drone a lot. One thing is sure about this review, the DJI clearly aimed at the S1000 at the high-end market. However, it’s not that hard to maneuver it, it’s quite easy to fly, so some beginner pilots might like it too, even if you want a professional career in photo-videography. Otherwise, this drone isn’t worth it for you. Sorry. The fact that it doesn’t come with a camera means users will have to provide their own, which big companies sure have, so it’s not a problem.

On the contrary, it gives you an opportunity to use the camera you are used to. The design wasn’t their main purpose, but it’s forgivable. However,  all the technical parts are great about this drone, the battery, the gimbal, the motor and everything that matters are very good. They all, assembled in one drone makes it possible to have amazing, flawless and crisp photos and truly beautiful videos. The motors make it easy for you to control, so don’t worry about shaky videos.