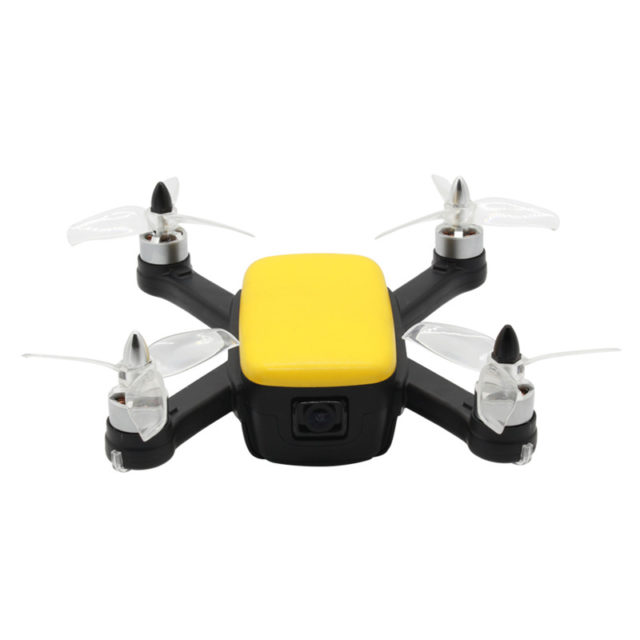 Maybe you thought about getting a drone, but you don’t want something too big that is hard to carry and requires a lot of space. Luckily, with all the drones out there there are plenty of drones like that. Undisputedly the best drone in the size and quality ratio is the DJI Spark, it’s portable, easy to control, and makes really sharp and clear. But the Spark is a bit expensive and not everybody can afford it, so we brought you a more affordable alternative in the “person” of the Funsky 913, this is also a small, and portable drone, with interesting features and a pretty good camera. But if you want to take a deeper look to follow me in this Funsky 913 Quadcopter Review.

The drone is built from plastic and comes in 3 possible colors: Orange, Yellow, and White, all of them are matching with the basic dark grey color of the drone, so no matter which one you chose, you will get a well-designed drone. The aircraft measures only 205 x 185 x 55mm and weighs a bit more than 200 grams but you won’t need an FAA registration for it. You will find two-propeller protectors in the case if you feel like you will bump into something you better use rather than to smash your drone.

At the end of each arm, there is a brushless motor with 2700KV power. These are paired with 3-leaf props, this combination will optimize your battery life so you can enjoy as much flight time as possible with a single charge of the battery. It doesn’t have any bumper, only a few rubber pieces so pay attention when you try to land not to damage the drone.

The remote of this quad is really small, which is better because it’s easier to transport it. However, I prefer bigger remote controllers because you have a better touch for them, you can hold them with more stability. The controller has a built-in battery so you don’t have to buy AA batteries for that, and this way you can save up a lot of money. Besides that it has all that you might need for a controller, it has the standard 2 throttles for control, button for GPS mode, Attitude mode, Sport mode, Take-off, Photo, Video. Also, you have some telemetry indicators, and last but not least a phone holder for your FPV experience. And the best part, you have to word “Transmitter” written on the bottom of the controller, so you won’t confuse it with another part.

According to the manufacturers, the 2S-1500mAh battery allows about 15 minutes of flight time. Both the battery and the remote controller can be charged using the included micro USB cable, use only this to charge those.

The camera on the drone is a 1080p one which makes surprisingly good pictures for a drone in this price range. The camera angle is adjustable, but you can do that only manually. The footage is stored on an SD card which is placed into the drone. Therefore you won’t have glitchy videos because of the low signal.

First of all, you have to bind the drone with the controller and then you have calibrated the drone as well, if you haven’t done anything like this don’t worry, every step of this procedure is in the users manual. One of the best parts of this drone is its GPS functionality, which will keep the drone more stable and you can also use Automatic Landing, which makes your life so much easier. The fact that it also has Altitude hold, and one key Automatic Return is just a bonus to help you make more stable photos. The drone’s standard speed is 3 m/s but as you can saw earlier it has a Sport mode as well, which makes the drone able to fly with a speed of 5m/s

The app for this drone is called “Heliway” which is available for both Android and iOs devices. The app is a bit laggy, but that doesn’t mean that the footage on the SD card will be too. With the app, you can unlock unique features for the drone, like gesture control, so you will be able to make commands like taking a photo or a video just with the unique hand gesture. The drone won’t recognize that every time. But still, it’s a fun feature

The Funsky 913 Quadcopter from our review is better than I expected, it’s really responsive and works how it was meant to be. The motor works really well, and the 3 m/s speed is pretty enough for a drone like this. However, there are still some parts of the drone that need to be improved. One of them is the camera, which won’t make you able to make cinematic videos or really good and sharp photos, the camera it’s just “OK”, nothing much. But if the camera would be better then I guess the price would be higher too, so we can forgive them for this.

The second aspect that could be improved on the drone is the flight time, which is only 15 minutes, but if you use any feature on the drone that is reduced radically. However, the hands of the manufacturers are tied in this situation because from the size they can use a bigger battery, and if they downgrade the motor than the drone will be really boring, so the only way to improve this aspect is to buy more batteries. But if these things don’t bother you and you just want to try out your drone piloting skills on a cheap drone then you should definitely buy it. And you can do that on Banggood and Aliexpress.