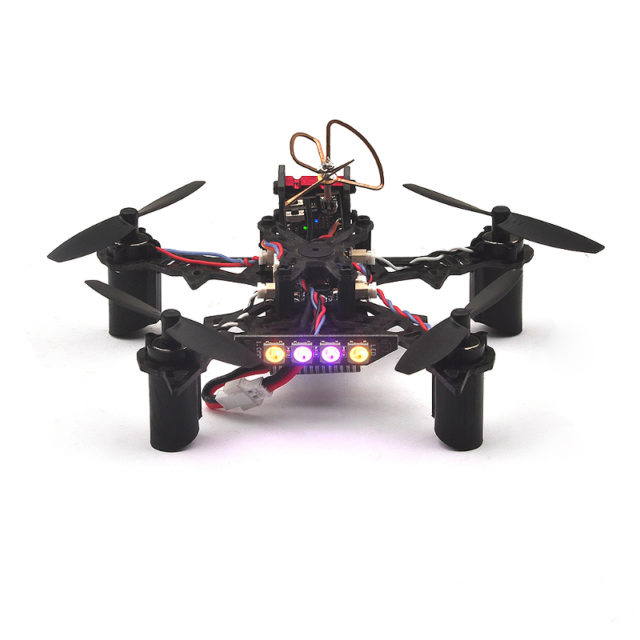 This quad is an outstanding micro FPV drone that looks plain but mean. It has a little bit of flare because of how they styled the carbon fiber frame. This does not give a real functionality to the Eachine BAT QX105 Racing Quadcopter that we’ll review later but it looks cool. It is an affordable brushed micro-drone that is known for how fast can it be and its super speed. The build quality is at a high level, it is cleanly built and a well-designed model.

BAT QX105 is an excellent drone that helps you learn more about the most exciting feature of it, namely the build-in BetaFlight OSD and the telemetry output which are so unique for a micro quad like this. The BetaFlight is available from the google chrome app market and you can download it for free. The drone is customizable in BetaFlight with the standard three choices: DSM, Frsky and Flysky. You can easily set it depending on your preferences.

If you choose the Flysky version, it will be paired quickly with an i6 remote. An important aspect regarding BetaFlight settings is that the BAT is set so when armed the motors do not start spinning. You can also program it to fly in Rate mode which is an advanced manner of flying or if you want, you can put it on Angle mode, this is a way to dominate the flight. With the Rate mode on you can execute difficult maneuvers and be more precise. On the other hand with Angle mode its easier to manipulate the drone and its very good for beginners.

The BAT QX105 is gifted with an onboard camera, which sends the signal with the help of a 25 mW video-transmitter. This 600 TVL HD CMOS 1/4 inch camera has an adjustable angle which is nice both for a beginner and for an advanced pilot. It is well protected and an amazing thing is that it has an M7 lens with 120 degrees field of view. This camera is good enough and comparable to a 720 p picture.

About The Large Coreless Motors

This tiny drone has 2 Black Edition 1020 Coreless brushed motors that are attached to large 66 mm propellers that generate a lot of power for the drone. The motors are quite big and beefier than the QX70, QX90, QX95 models. The size is much thicker and they are stronger so that is why they eat battery faster. These big motors are covered in plastic so they are well protected by shocks. Also, the guards at the motors are very durable and handy.

In the box you will get two 600 mAh batteries that you can charge well with the included USB charger, but there is a problem with them. The batteries are not that good at holding the voltage and it drops almost instantly at values around 3.5 V and below. So the batteries make the beeper go crazy and it sags constantly.

The Second Version Of QX105 Launched

The BAT has a second version called VTail QX110. It does not have the same fancy style of the frame but it has an interesting design with those two rear motors added to it. It looks cool and it is something different, more particular. This version is larger and it measures 110 mm diagonally from the motor to motor, while the BAT measures only 105mm, maybe they wanted to create clearance for the propellers.

Eachine Aurora90: An Upgrade In Speed

This model that Eachine created is also a small drone-like QX 105, but a little bigger in size. The difference between them is that Aurora 90 has a lot of speed because of those powerful and efficient motors. If you ask why then I tell you that the motors are brushless which is a significant improvement. It is definitely worth checking it out.

Is The BAT QX105 Resistant?

The frame is 1.6 mm thick and it is resistant. The material that it is made of is carbon fiber so I can say that it really is strong. Also, the propellers bend and do not break so easily, they are resistant to breaking. The durability is not so great if you are a beginner. Everyone expects to have some crashes at the beginning, but unfortunately, this quad is not made to survive hard crashes.

Still, you can easily repair it, except the serious cases, when you can do nothing else but to replace the damaged parts. No worries, you will find a nice selection of extra parts. If you want to replace motors or other accessories you do not need to solder because the mainboard has plugs for all connections. But overall, it is pretty resistant and it is made of some good components, you just need to take care of it and fly it nicely.

How Does This Quad Perform?

The BAT QX105 has a good performance when flying and it is stable if the wind blows with more then 10 mph. This mini drone is quick so it takes some time to get used to it and it also takes some time to learn how to turn it, but it is not that difficult. Before you take the drone to its first flight, it would be useful if you check the small manual that is in the box because it has many good instructions. The drone comes with a build-in receiver and you can find it inside the flight controller. A negative characteristic is that it has some weak points and it lacks support so you can crash it easily.

Is It Worth It?

If you love a super speed mini drone with a powerful engine like Eachine BAT QX105 from this review, then yes. But take care of its speed and remember that this drone is mostly suited for outside action.

It has that stylish bat-inspired frame which gives it some exclusive color and can be a unique piece in your collection or a particular starter drone, so it is worth buying one of these little beasts.