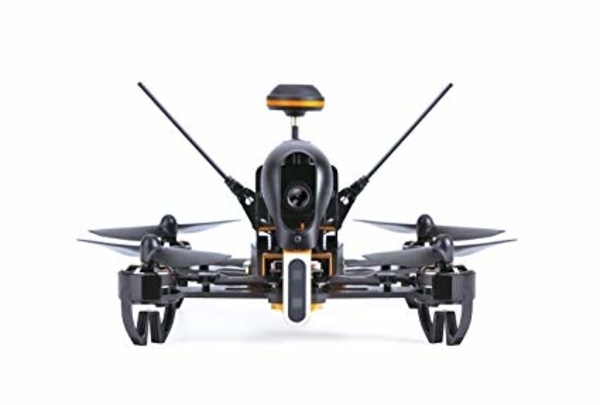 The Walkera F210 3D Quadcopter is a classic mini-quad that is an updated version of the Walkera F210 and a perfect one for FPV drone racing. It comes with a different flight-control system and it has a resistant body and a modular design.

The F210 3D it’s fully assembled, super-fast, easy to control and fun to fly. It is also ready to withstand any accident or to take all kinds of crash abuse because it is built like a stone. This drone is a dedicated ready-to-fly racing quad that is known to be a top performer of his category and a winner.

To take part in a race the drone must have the best perceptive flight controllers onboard. That’s why this quad has installed an F3D flight controller to it. It gives a larger set of capabilities required in high-speed flight and the added sensors deal with the balance and movements of the drone.

This makes the Walkera F210 3D extra quick and versatile while flying, which is vital in a race. Also, for the convenience of advanced users, it can be plugged to the PC and it allows the flyer to dial in his custom settings for nicer flight experience.

This racing drone has a modular design that helps the user to easily change broken or damaged parts, which are detached from the main structure because of the design choice.

In other words, the crashes and collisions are handled better, as the impact does not necessarily affect the whole structure, but is instead stoped by the removable parts.

To stream the live FPV view of the camera, the F210 3D has a detached OSD unit, that gives you an inclusive rundown on the location of the craft, and also status readouts like a signal range alarm function, horizon line overlay, and a battery level indicator.

The flight time is around 5 to 9 minutes and it is provided by the 1300 mAh 4S LiPo battery of the drone. Still the duration of the flight time is depending on the way of flying, as the drone has a high speed, which can fast run out its energy resources in a few minutes.

Having a 4S battery means that the quad has a higher voltage output. So more current is being transferred to the motors, resulting in greater performance but in return a quicker rate of depletion.

The Walkera F210 3D has a frontal 700 TVL camera, which captures great pictures even in dim light and is a standard camera usually found in CCTV systems. The camera isn’t really the best in terms of video capability because it has around 976 x 582 pixels of digital resolution, which is a little bit lower than the 720p standard. But the need for better imaging range is less of a necessity considering that the main usage of the drone is racing.

The camera of the drone has some cool features that are the 120° field of view angle and night vision. The pilot can focus more on flying because of the photosensitive sensors which provide an important function of adapting to the brightness of the light source.

The Walkera F210 3D owns a classic 7CH DEVO 7 remote controller, which is a simple-looking controller and available for all sorts of drones, whether they are quadcopters, unmanned aircraft or helis.

It gives you the basic functionality and you are set to fly the drone and enjoy the adrenaline-pumping fun of drone racing because this little quad flies just fine without any kind of coded alteration.

The Devo 7 controller consists of eight AA Ni-Cd batteries so it is somewhat on the heavy side.  To make it lighter, you can replace the batteries with 2200mAh 15C Li-Po batteries which are lighter and cheaper.

This drone comes with a modular build design that makes it resistant and this limits the damage of its parts that come off during a crash.

The F210 3D is build up of aluminum and carbon fiber parts, which provide a stronger condition to the overall rigidity of the structure without risking the good performance because of the added weight. The electronics which are considered the quad basic operational unit and the important internals are protected by a specialized frame.

On the Walkera F210 3D there are also present LEDs that give much more than illumination in night flight. These LEDs work as status indicators and also as directional indicators that indicate where the quad is going towards.

The drone performs with a balance between finesse and aggression. The response level is amazing, the controller inputs are translated into aerial maneuvers in real-time and this helps to avoid collisions while competing with other drones.

The signal range of the quad is effective and around 800 meters so it gives you a great amount of ground to cover. The drone can go up to 90 kph really fast, but it also has a beginner mode with an assistive high horizontal balance for stability.

The F210 is noticeably quicker than a drone like Runner250 and it’s much more responsive to stick inputs, but it also seems a lot more stable and faster. When you are piloting it slowly it will catch the wind less outdoors, leading to less drift because of its chunky shape.

Unfortunately, you have no place to stick an action camera on it, so if you want to record your flights in HD, you will need to purchase or make one.

The Walkera F210 3D is a brilliant little quad and a sane choice for a racer, with all the needed functionality and loaded specs, as shown in this review. This drone is a true racer in terms of detail and design, but the specific design points make sense just after you give it a try and pilot it. The Walkera F210 3D will give you a nice performance but it definitely lacks some flight features that make flying easier.

With its lightning-fast speed and the easiness to control it, the drone is a true competitor and can even win over other drones in straight races.  The incorporated modular design is keeping the drone functional after multiple crashes, which are pretty manageable. This is also useful for users who like customization, giving them the opportunity to configure the drone as they desire.

It’s not super pricey an if you ad goggles, a few extra batteries, and propellers you can go right into a drone race with a very competent, fast and tough drone, without touching a soldering iron.

It has some minuses with its awful manuals, low-grade video signal and lack of video recording performance, but it is an awesome mini-drone to pilot and a good start to FPV flying.