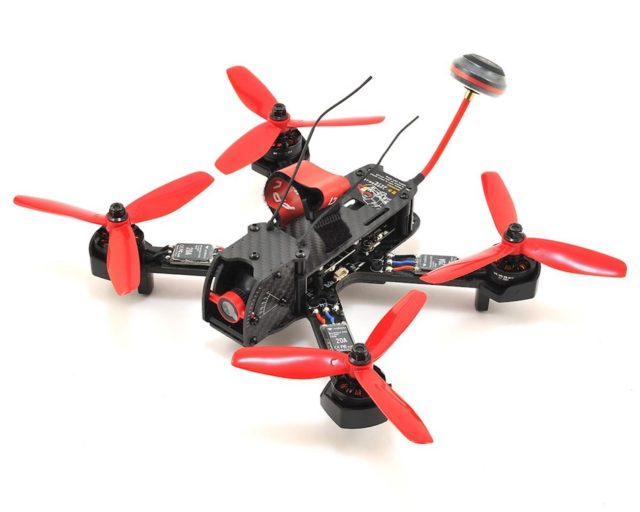 Drone racing is just getting more and more popular these days. The competition. The DRL (Drone Racing League) is so popular that it is even broadcasted on ESPN. The MultiGP has over 16,000 official pilots and more than 1,000 chapters worldwide. The uprising of this sport has given rise to a lot of “ready to fly” bundles and kits that aim to get anyone and everyone into the hobby.

The problem is that most of these bundles are not racer drones. Walkera has been around a while and has been dipping their toes into the Ready To Fly races for a few years now with the successful Runner 250 and Rodeo 110. These aircraft are some great looking drones, but they are mostly made up of proprietary components that look great but can’t be upgraded. That’s why they came up with the brand new Walkera Furious 215, the latest RTF bundle from Walkera.

The complete RTF bundle you can get for around $350. The Furious 215 aims to be the first ready to fly a quadcopter in his category, which is dedicated to racers. The Furious 215 is basically an improved version of its predecessor. The improvements were made after the feedback of the customers. The RTF bundle includes everything that you might need to get flying except the FPV display.

You get the fully constructed Furious 215 itself, a Devo 7 transmitter (it’s really rare to get the transmitter for a racing drone), 1330mah four-cell battery and charger. Besides this, you will get some extras like spare propellers, LED lights for the arms, USB cable, a trainer cable for the transmitter, and an adjustable HD camera mount, and some tools for the installation. The drone can be flown immediately after the battery is charged.

Talking about the design, the Furious 215 looks a bit different than his older brothers. This one looks like a standard race quad. That’s not a bad thing, on the contrary. The body is made out of more carbon, and less plastic, with the ability to use more off-the-shelf parts. The 20A ESCs are easily replaceable if you prefer something else. The motors are the Walkera WK-WS-28-017 2500kv brushless motors that give a lot of punch to the drone.

The camera is adjustable manually, so you will get the best FPV experience. The angles on the camera mount are market. This is a simple but really effective feature. The camera is placed just behind the sides of the carbon fiber frame so it will be protected in the case of a crash. The camera itself is a 600tvl SUPER HAD II CCD from Sony. It has an integrated mic and low light support. The mic is a plus for a racing drone, but it’s a cool feature anyway.  Walkera really listened to the community and placed one of the best cameras on the drone.

Do note that the included VTX antenna is left-hand circular polarized so if you are running RHCP on your FPV screen you’ll need to swap out the antenna for something else, for a better experience. The antenna mounts directly on the rear side of the aircraft which is something of a standard for racing. The frame is designed with a little bumper in the pack, to protect even more the antenna connection in a crash. Another aspect to show you how carefully this is built.

The rear side also features some LEDs which indicate the status of the aircraft, and function. Additional LEDs are included in the package that can be mounted under the arms. These are both for aesthetics and practical purposes as well. The drone comes pre-wired with connectors and adhesive backing so you just plug them in and stick them in place. Zip ties are also included to help tighten and secure them to the arms.

As for the body, there is plenty of room for a larger battery on top if you choose to fly with a 1400 or 1500mAh 4 cell. Due to the bigger size, the drone won’t be able to fly to its full potential, but it will still give you more flight time.

The Walkera Furious 215 from this review is an RTF racing drone that is worth every penny for those interested in getting a racing quadcopter. It’s common that in such drones ESC and motors make it easy to maintain/upgrade the drone. The stock tuning and rates could be improved and there are some proprietary parts that. The drone has a pretty great flight time and a good speed. The camera will give you a clear live feed. All in all, this is a great choice for those who desire a new hobby, or anyone looking for a simple yet quality RTF solution. You can check it out on the Walkera Official Site.