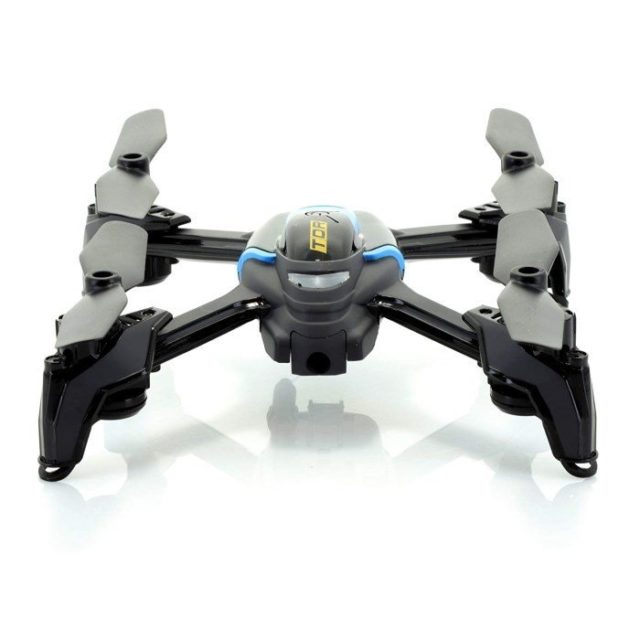 The Tenergy TDR Python Mini Drone is one of the best low-budget drones for beginners. It’s a good gadget to learn the basics of a drone. It’s true that it doesn’t have the very best specs but if it turns out that you like drones you can upgrade yours anytime. The TDR Python is also really durable so it can survive minor crashes and overall has a pretty good design and build. That being said, the Tenergy TDR Python mini drone has the potential to become a popular drone among the beginners, as you’ll see in our review.

The Tenergy TDR Python has a  small and compact design. Featuring a jet black coating with a cockpit frame located at the front it looks like any other standard drone, only in smaller. The place where you see the cockpit is a LED light that helps you in the orientation of the drone. This way you can detect the drone during both day and night time when you execute flight operations. At the top of the frame, you can find the company’s logo.

The drone measures 7.7 x 7.7 x 1.8 inches with a weight of 60 grams (2.1 oz). With these characteristics, it can be tagged as a mini drone, just like the Wingsland X1. Having a mini drone is cool because you don’t have to mess with all the legal stuff like FAA registration, and also it’s easier to transport or to store it at your home. Lastly, the drone is covered with ABS plastic. This is a popular choice in the drone industry because it’s light and durable. So even if you’re a beginner and you somehow crash it into something, it won’t crack as easy as you think it would. This is a big advantage for newbies with a lack of experience who are looking for a drone that will last a long time.

Like most drones nowadays, the TDR Python quadcopter uses a modularized battery. This aspect provides an additional layer of protection against overcharge and discharges as well as improved power efficiency for better performance. The battery provided is a 3.7V/380mAh 1.4wh battery that gives you approximately 7-8 minutes of flight time.

The controller provided in the package in a small and lightweight controller that looks pretty much like a console controller. It has all the essentials like the two joysticks and some buttons and switches for different flight options. The transmitter measures 3.6 x 2.4 x 2 inches and weighs 57 grams (2 oz), so it’s just a bit heavier than the drone. It works with a 2.4 GHz frequency and you will need 2xAA cell batteries in order to power it up. The max flight distance from the controller to the drone is 40m/130ft which is not much. However, mini-drones tend to have a lower range than the bigger ones.

Not all Mini drones have cameras, but this one does. The Tenergy TDR Python Mini Quad comes with a 720p camera on board. There isn’t any camera stabilization so in order to get clear photos and videos try to fly the drone smoothly or to take pictures only in altitude hold.

The Python RC drone is flying pretty well for a drone like this, even with those small motors it flies around well and with a dashing speed. The drone responds well to the controls. Because of the modularized battery of this little drone it has improved performance due to more power. This contributes a lot of flying around with high speed and demonstrating responsive to controls. But you can choose the speed of the quad because it has 3 different speed modes, so if you’re a beginner you will still be able to use this quad as it was meant to be. The TDR Python mini drone will be on the lowest speed setting by default.  Also, the quad is equipped with a 6-axis gyro for a better stabilization system and quick recovery after rapid movement.

A drone without good features is pretty hard to control, but the TDR Python Mini drone has some. It’s true that it has only the very basics, but it’s still more than nothing. The easiest one, but maybe the coolest one too is his ability to perform 360-degree flips with a single press of a button.

Besides this, the drone also has an altitude hold feature. With this, you can fly the drone to

preferred height and it will stay at that point without any action from your part. This feature will let you make more clear photos and videos. Unfortunately, it doesn’t have any features like follow me or orbit mode. So if you want to make a more cinematic video you will have to perform those manually.

Out of all low budget drones reviewed here, the Tenergy TDR Python Mini is one of the coolest drones, as shown in our review. It does not just look cool but it also performs really well. All the hardware and software are on point. The design, including the LED, motors, etc are really aesthetic. As for the specs they are all decent for a drone in his caliber. It’s true that the 40m range and the 720P camera aren’t the best you can imagine but for a price, you can get this drone is okay. Also, this drone is a real beginner-friendly drone so if you want to try out flying a drone but don’t want to spend too much on it this might be just the perfect drone for you.

If you wish to buy the Tenergy TDR Python Mini Drone check out the price on Amazon.