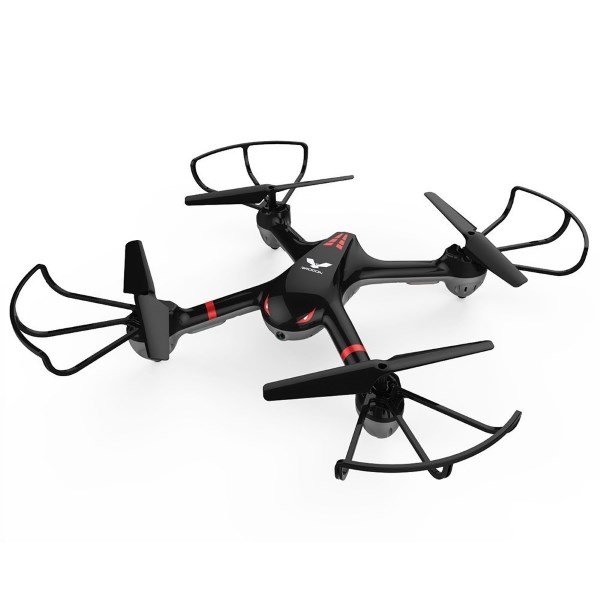 If you are looking for a beginner drone, you can be in some trouble because you have to consider a bunch of factors. But the most important must be to be affordable. It’s better to start with a lower-grade and cheap drone. And after you got into the drone business you can upgrade it to a better one. The second one is the specs, after all, you have to know what you’re spending your money on. If your search criteria match what I’ve said and you want a well-performing and cheap drone checks out the X708W from Drocon. In this Drocon Cyclone X708W Quadcopter Review, you will see why this drone is one of the best cheap drones that you can get. Not to talk about the fact that it has a really nice look, and flies really well. But let’s dive deeper and see the specs of the drone.

The design of the drone is really similar to the one that you can see on the Snaptain SP700. You can see that both of the drones have an eye to make the whole design more entertaining and the camera is in the “mouth” of the drone. I really like this outstanding design, it makes the drone way more interesting. As for the build, the drone is made from ABS plastic which is durable and light at the same time. It might survive some minor crashes, but don’t try the drones crashing limits. The drone is not foldable and it measures 16.8×9.8×4.2 inches which isn’t that much, so you will be able to transport the drone even in a backpack if you don’t have a special case for drones.

This drone is powered by a 3.7V 550mAh Li-Po battery, this battery will give the drone around 8 minutes of flight time. But this is depending on your style, weather, and many more. The flight time given is not the best, but not the worst either. It’s just perfect for beginners. The battery can be removed, so if you wish to upgrade the flight time you can buy a separate battery to double the flight time. One battery can be charged in one hour, which is an approximately good time.

The camera on the X708W is probably the weakest point on the X708W. One thing is sure, you won’t be able to be a professional content creator with this, but it’s nice for exercising. The camera that you get on the drone is a standard 720p hardware that is placed on the front of the drone. This way the camera won’t be falling out from the drone, but you can’t upgrade it to a better one either.

However, don’t be disappointed yet, because this camera is FPV capable. So you can get a real-time feed from the camera through Wi-Fi. For this, you’ll have to download the app on your phone and then to connect it to the drone’s Wi-Fi. The FPV range is only 30m, so you won’t be able to see much further than you can normally see. But it’s still more than nothing.

The DROCON Cyclone X708W can do way more things than you can imagine. For example, it can do headless mode where you don’t need to know where the head is. This feature can be found in all of the high-grade drones, due to its importance. There is also a feature called One Key Return Home feature, you have a button on the remote controller that enables this feature. When this is enabled you the drone will get a command to return to you immediately.

Another useful and fun feature is the 360-degree flip. You don’t have to struggle with this trick, just make sure there is plenty of room next to the drone and then press a button. Just press it and then select the direction with the joystick in the direction where you want the flip to happen and the drone will do just that. Also, because there is an FPV feature on the drone, the controller comes with a phone holder, so you can get a better FPV experience.

The max range between the controller and the drone is 100 meters. This is an average time, so you won’t be able to see go really further with the drone, but at least you can always keep a visual connection on the drone.

All right, let’s see what the Dorcon Cyclone X708W is capable of. As we said, this is an ideal beginner’s drone, and we prove that because it only has a 720p camera which would be really disappointing for a professional photographer. Unfortunately, you can’ even change the camera for a better one.

The battery life is also a low range one because it can fly for only between 7 to 9 minutes. But at least you can get a full charge in only 60 minutes. The range is 100 meters, so beginners can always have their eyes on the drone, without losing it. It also has some features that can help the new drone enthusiasts to learn the basics of the drone.

If you’re interested in getting the Drocon Cyclone X708W Quadcopter you can check out its price on Amazon.