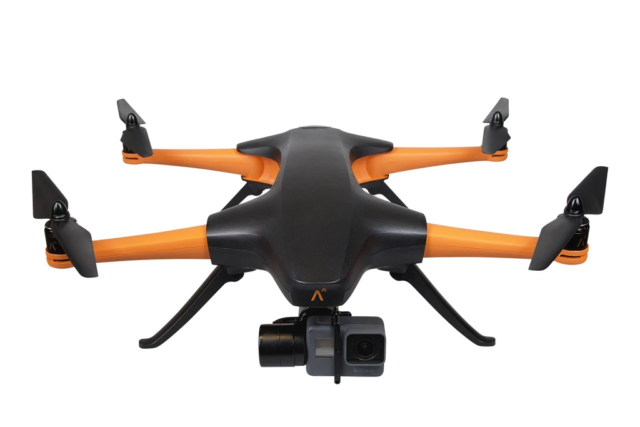 The Staaker Sports Quadcopter is nothing like a regular drone. His name is almost like the word ‘stalker’, which is not far from the truth. However, it was made to stalk you doing different activities, more exactly to capture different extreme sports activities. The manufacturers carried out this by removing the remote controller and perfecting the follow-me modes with an armband. The armband can be tightly strapped on you and this way for the drone will be easier to follow you. This way those video makers who love to make extreme sports it will be easier to make quality content.  Let’s see more about the Staaker Sports Quadcopter in this review.

The idea is simple, it was created to follow a person without you having to worry about the controls. And yes, there are drones with ‘Follow me’ mode, but if you used one you know how poorly they work. But this one comes with a bracelet that sends signals to the drone, this way the quadcopter can follow you with more accuracy. Through radio waves that the bracelet sends, it’s ensured that the drone follows you around anywhere you go. Through radio waves, the handstra[ will ensure that the drone follows you around anywhere. Besides this, Staaker has algorithms that allow it to make the smoothest videos.

Besides the awesome features this drone is also foldable. The drone measures 200x340x110 mm when it’s folded and 440x340x150 mm when it’s unfolded. You even get a carrying bag with the drone, this way it’s easier to transport it. The whole package requires only a little bit of space in your backpack and you can bring it with you anywhere. When you unfold it, the landing gear can be folded down cleverly so it locks the arms into place and the drone is ready to fly. The drone is built in such a way that it can resist rain without damaging the interiors. However the drone is a bit heavy compared to other drones because it measures 1.6kg, so you will definitely need an FAA registration.

Staaker’s drone has a 3-axis gimbal to support a GoPro sports cam. This way you don’t have any built-in FPV view from the manufacturer, only if you connect your phone to the GoPro directly. That feels like a step back from the other regular FPV drones, but if you think it through you can’t watch yourself and do extreme sports at the same time. Also, you would look bad if you would stare the whole time on a phone.

The developers who worked on Staaker drone threw away the regular remote control, you usually see with a drone and replaced it with a wearable armband. So instead of struggling to control the drone you just have to put on an armband and the drone will follow you. The drone has multiple follow modes for different occasions so you just chose one and the drone will keep you always in view.

The three modes that the drone is capable of are the following: auto-follow mode, circle mode and the stationary mode. The drone can be flown even as a normal drone, using simple up/down commands, closer/further away from me, turn left/turn right controls. For this, you have some buttons on the armband which will control the orientation of the drone towards you. The bracelet only has four buttons so it will be easy to learn the purpose of each one. You can set up things like the drone’s distance towards you, the height, and the direction.

Usually, drones have a bit of lag when they do such things. Most of them turn only when you go to the edge of the screen. But the Staaker will always keep you in the center of the footage. Both the armband remote and the drone have a series of built-in sensors that’s why it will always keep in the center of the image. Just like the drone the controller is also water-resistant, it submerged in up to 5 meters of water. The battery you get with the drone will let you fly for 30 minutes which is quite nice, you can do a lot of interesting stuff in that amount of time. However, if it still seems that it’s not enough you can always buy some spare batteries.

Besides the cool features and the number of sensors, there is a downside of Staaker’s drone is that it doesn’t currently have obstacle avoidance. This may turn out to be a problem for some drone pilots. However, you can avoid any crash by assuring that the drone will fly in a wide-open area where there isn’t any obstacle for him.

When Staaker was first announced back in the middle of 2016. It seemed to be a copy of the successful AirDog. Back then it had a price of $1,600. But, taking its extortionate price too much, they dropped the price to a slightly more realistic $999 (2020, June). However, to be able to make footages with it you’ll still need a GoPro. The drone doesn’t have a built-in camera.

The idea of Staaker Sports Quadcopter is great as mentioned in our review. For those who work alone and have to appear at the same time behind the controller and in front of the camera too, it’s a great opportunity. However, if you don’t use so much extreme sport and you are more like a creative person who just loves to make videos about nice landscapes or events I would recommend you to buy a Phantom 4 PRO instead of the Staaker Sports. As the name indicates the people at Staaker targeted the athletes, so if you only go snowboarding and biking once a year this drone maybe isn’t for you.