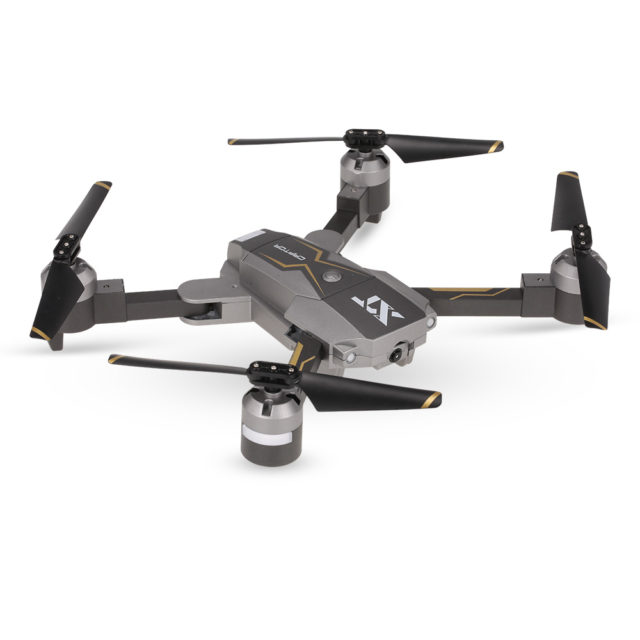 Attop is a less known drone producer, having its base in China. They are specified for making fun toy grade drones. All of their drones are liked by the drone enthusiast people out there, but the Attop X Pack 8 Quadcopter featured in this review is something more serious than a toy grade drone, and it’s really one of the greatest created by them. Besides drones, they also make RC cars and RC planes.

In this Attop X Pack 8 drone review, you will see how good this drone really is, so if you consider buying it you may have a clearer view about whether or not it’s worth it for you. We will talk about its camera, battery, controller, flight specs, etc. So after you finish the review you will have a clear view of all of its pros and cons. But if you ask me, for the price you can get this drone, it is quite a good investment and it has some nice fun features.

The quadcopter has a really professional look. Design-wise it has everything you might need on a quadcopter, under the front two propellers, you get a LED light in blue color. This will help you in orientation in darker environments.  But the best feature is still the foldable design which will make it a piece of cake to travel with this drone anywhere. In his unfolded state, it measures 11.2 x 11.2 x 2.6 inches and when it’s folded, it measures 5.3 x 5.1 x 2.9 inches. So as you can see it’s really small and portable. Its weight is also kinda small because it weighs only 157 g, so you don’t have to register it with the FAA.

The outside of the drone is made of durable ABS plastic, this gives the drone a lightweight and also a durable coating which will be resistant to minor crashes. The design of the drone has a grey and black color combination, with minor gold details. The drone is stabilized by a 6-axis gyro system which makes the drone stable. Besides that, it has an optical flow positioning system which can also be a big help.

The X-Pack 8 drone features a 720P camera on the front which can take pretty good quality videos. You won’t be able to become a professional content creator or a wedding videographer with such a camera, but you will be able to create some nice memories for yourself. Or to learn how you should use a camera drone with all of its perks.

It has a 2MP resolution camera that can take decent pictures. The camera is a really good one, not just because of the resolutions, but because of its wide angle of view of 120 degrees, which might not be the most realistic one, but for sports cameras, it’s really handy to have a bit of fish-eye effect.

The camera of the drone also has an FPV feature which will stream a live feed from the camera to your phone. But for this you have to download the manufacturer’s app on your phone, the app is available for both  Android or iOS devices.

The drone comes with a 3.7V 800mAh lithium polymer battery.  It’s not the best battery you can get since you get only 8 minutes of flight time with this battery, but on the good side, it takes only 40 minutes to charge it fully. Also, the battery performance can be influenced a lot by the circumstances such as the weather (in cold it could last less), your flight style, how many flight options you use, etc. So if you want to have more flight time with this quad, because the 8 minutes it’s not enough you buy another one, so you can double your flight time.

The transmitter is powered by 3x AAA batteries, and the first good news is that this is one of those few drones that provide the batteries to the transmitter. The second good thing about the transmitter is the fact that it has a retractable phone holder at the top rather than at the bottom. It has all the important parts such as the two joysticks for movement and buttons for different functions. But it’s not just practical, but it also looks really good and feels ergonomic which can let you hold it for a long time without feeling cramped in your hands. Unfortunately, the max control range for this transmitter is only 50 meters, so if you want to make videos about different landscapes or moving objects you will have to move along with the drone because that 50 meters won’t take you far.

You will be surprised how much intelligent flight features you can find in this drone. Usually, cheap drones with specs like this one only have altitude hold (in best case scenario). But not this one. The manufacturers from Attop have put inside this little quad all the features that could. So besides the basic optical flow positioning, gravity control, headless mode, and return home features it has some other features as well.

The first one that I would like to present is the trajectory flight. I know that it’s not something new, but it’s a really useful one. With this you will have the possibility to draw a route on a map within the app, the drone will go right there. It might not be flawless like in the case of a DJI drone like the Mavic Mini, but it’s still something nice to have.  The second special feature is Voice control, which is a pretty rare feature. The controls you can give by your voice are limited, so you won’t have full control, but you will surely enjoy the few ones that you gave. The second one is an AR game that will open up within the FPV feature. However, your max game limit will be 8 minutes, because that’s the full flight time of the drone.

The Attop X Pack 8 Quadcopter featured in the above review is a bit better than a toy grade drone, it looks more serious and works more seriously too. However, there are still some things that could’ve been better. As the flight time, the range, and the camera, these things are pretty low standard ones. But for the price you can get this drone, it’s understandable. But those 8 minutes you can use the drone are really fun and you can enjoy a lot of intelligent flight features within, so don’t be disappointed. Having this drone could be a perfect chance to learn how to fly a higher grade drone. So when you upgrade your drone you will know how to use those different features on it.

If you’re interested in purchasing the Attop X Pack 8 you can check out Amazon, Hobbyking, and Aliexpress.