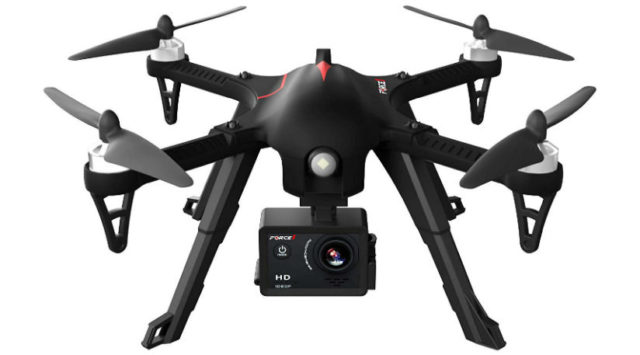 The Force1 F100GP or Ghost that we’ll review in here is the upgraded version of its little brother quadcopter, the Force F100. The simple F100 was already a success drone, but with these upgrades, it got just better. The Force1 F100GP is a drone that fits both beginners and experienced or professional drone users. It is good for the beginners because it has a lot of safety features, and the professional users will love it because they can put their GoPro sports camera in the camera holder, this way they can make amazing aerial footage with their favorite camera.

The Force1 F100GP has a professional and simple design. Its design is not foldable so it will be harder to transport it anywhere, but at least it has a sturdy design. The shell of the drone is also made from a durable material which is usually used on drones. This makes the whole quadcopter more resistant for crashes, which at some point will happen to you no matter if you’re a beginner or an expert. It comes with three different colors, the shells on the top can be removed and switch colorways on the go, though the classic black option might be the best option.

The manufacturers even got you extra protective features including propeller guards and slender landing legs that protect the camera unit when you’re attempting a landing. If you wish you can remove these units, to reduce weight, but with these protective parts on the drone doesn’t weigh too much. The drone has a weight of 445 with the battery and without the propeller guards. After plenty of flight most of the reviews find out that these protective parts don’t influence the flight time, so you can keep them on for extra protection.

Just like the drone itself the controller also has a professional-looking and simplified design. The controller is made out of plastic, and has a sturdy and nice touch in your hand. The weight is just right, it won’t hurt your hand. The arrangement of the buttons on the controller is also good, with a normal-sized palm you can easily reach everything. As for the technical specifications, the max range between the. Because the camera on the drone it’s not an integrated camera it doesn’t have an FPV, therefore you don’t have a phone holder on your controller.

The battery in the Force F100GP is a 7.4v 1,800mAh one, and thanks to the kindness of the manufacturer you get two of them. One battery can give you a flight time between 15 and 17 minutes depending on many criteria. But with two batteries you get at least half an hour. This is a pretty decent time, considering the drones in the same price category.

While this is already an amazing amount of flight time, if you feel like that’s not enough for you and you want to use the drone for more serious purposes you get even more batteries if you wish. The drones battery can be easily removed, and while you’re flying with one battery you can charge the other battery.

With the Force100GP you get a1080p HD sports camera. Most of the drones in his category give only a 720p quality camera but not this one because with this quad you get a full HD.

Furthermore, the drone’s camera system is a modular one, meaning that you replace the camera with a different compatible one on the craft. You can change the camera with even some GoPro units which are great news for people who already have a GoPro Hero series camera. This will give you even a clearer picture and GoPro cameras even have a built-in stabilizer.

The Force1 F100 like other modern quadcopters have demonstrated incredible stability and strength that ensures smooth and easy flight controls. The drone is built with some good brushless motors, that are way more reliable than the brushed motors. A piece of good news for all the new drone users is the fact that this quad has an altitude hold function just like any other high-grade camera, and besides this, it even has an upgraded 6-axis gyro stabilization system which will ensure you a stable flight.

The altitude hold function is a user-friendly feature that all the beginners will love. What this does is basically keeps the drone to maintain a fixed height. This is done by detecting air pressure changes and the barometer adjusts with his sensors. As for the upgraded 6-axis gyro stabilization system, this feature is especially useful when it comes to keeping the drone stable in the sky. It helps ensure a precise response to the controls, which will make even your footage smoother.

But that’s not all, there are more features to talk about. The Force F100 drone comes with two-speed modes, so if you’re at the start and you want to take it easy you can set the drone to the inferior speed settings. Whether you’re flying it in slow or high-speed settings, we recommend to fly it only outdoors because the powerful motors are a bit dangerous to fly indoors.  The drone is so powerful that on the highest speed setting, you can fly it at a speed of 20 miles per hour.

This two-speed option allows beginners to learn the basics of flying a drone. It’s required for the drone to have a strong motor because it has to be capable of lifting an action camera without dragging down its performance and the quality of the footage. So that strong camera is a must. Overall, the performance that the drone comes with is top-notch. As for the feature, it has some flaws in it, but for a beginner grade drone, it’s perfect.

All kinds of users can find something in this drone, no matter if you’re a racer, aerial photographer, or a beginner who is interested in action camera drones. All of these users will find that Force1 F100GP is an enjoyable quadcopter as shown in the above review. It is very stable and packed with safety features. It’s cheap, safe, fast, and can hold a sports camera, what else do you need for a drone?

If you’re interested in purchasing the Force F100GP you can order it from Amazon.