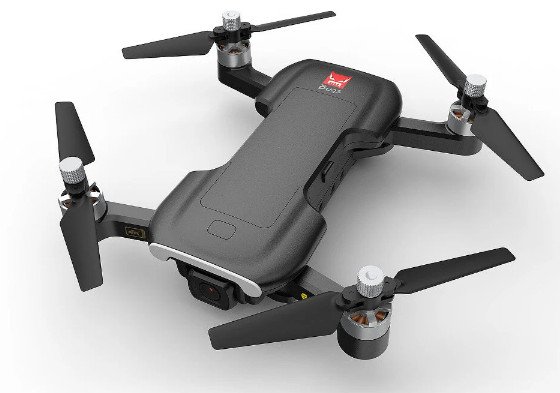 The MJX Bugs B7 Quadcopter features a nice foldable design which is a big trend in drones that we’ll review here. Therefore the B7 is a small and compact drone weighing somewhere less than 250 grams. The Bugs B7 has a 4K camera instead of a 1080p one that most of the drones in his price category has. With its powerful camera and foldable design, it’s one of the best Mavic Mini alternatives that you can get under $200.

It’s an ideal drone for those who are not satisfied with the DJI products and want to upgrade their gear to be able to take some aerial footage. But if you’re a complete beginner, who has never flown a drone before you will find just as well a lot of joy in this quadcopter. You can learn all the basics about the drone in a short time. Also, the features in this drone will make it even easier for the whole learning process.

This drone is extremely easy to transport anywhere due to its lightweight build and foldable design. The drone measures 240×235×55cm and weighs around 250g, with battery included. Which is good news for those who live in the UK, Canada, or the USA, because they don’t need an FAA registration in order to fly the drone. Usually, other countries do not require any kind of registration, but to be sure, ask someone who has a drone in your country.

The design of the MJX Bugs B7 is just as good as its build. The drone is well designed, the whole body has a black color with some silver details. The frame is built from strong ABS plastic, which makes him lightweight and reliable in the case of a crash, at the same time.

The drone comes with 4 powerful brushless motors. Having brushless motors has way more benefits than having a brushed motor.  Also, they are placed on a drone to give the quadcopter a nice futuristic look. But other than just the design, brushless motors are very efficient, last longer, and require less maintenance. These brushless motors on the MJX Bugs B7 give the drone a top speed of 32 km/h which can be reached only in sport mode. Activate the sport mode, only if you feel that you mastered the controlling of the drone.

Another design aspect that looks really good and it’s really useful are the LED lights on the front. It helps you in identification the front and the rear of the drone, also it makes it able to fly the drone even at night.

The drone is powered by a 7.6v 1500 mAh LiPo battery, which gives the drone 12-15 minutes of flight time, depending on the environment and your flight style. This battery is one of those new sleek modular batteries that have to be fitted on top of the drone. Inserting and taking out the battery is very easy, and you don’t need any special tools for that. The battery needs around 3 hours to be fully charged. If you wish to have a longer flight session, because 15 minutes isn’t enough for you to take photos and videos you can buy some more batteries.

The drone comes with a good-looking, minimalist controller that you’ve ever seen. The controller has a comfortable hold and has a nice OLED screen that displays telemetry info about the drone.

The controller requires 2x AA batteries in order to power it up. Which you have to buy separately. The transmission range between the drone and the transmitter is around 300 meters. But for the FPV feature, the range is only 200m, so don’t worry, after you lose the live feed, you still have around 100 meters in which you can control the quadcopter.

As you saw in the introduction the drone has a 4K  which can record videos in 16fps. So you better reduce the resolution and you can set a higher frame rate to have a smoother video. For example, if you record in 2.5K you can set the FPS to 24 which is actually a lot smoother than the 4K version. A higher frame rate that gives you a smoother video can be much better than a high-resolution laggy video that can’t be enjoyable. Unfortunately, the drone doesn’t have any image stabilization hardware or software. The best you can do is to smoothen your videos in video editing software on your computer. So when you take photos and videos, make sure that the drone is staying still and you fly it slow and smoothly.

The camera has a wide-angle lens, which gives you a fisheye effect, but for sport cameras, it’s something normal. The angle of the can be adjusted only manually, so if you want a better angle you have to lower the drone to have access to its camera.

Due to the GPS inside the drone, it’s easier to have good flight stability. Also, it comes with autonomous flight modes for easier flying and better shots. One of the most important and useful hardware on the drone was the optical flow sensor on the bottom that you can turn on or off on the remote controller. The optical flow sensor can help you when the GPS signal goes weak.

Like a lot of the new generation drones models, the MJX Bugs B7 comes with some standard smart flight modes that will allow you to fly the drone more easily or even hands-free. Just make sure you have a lot of satellites connected to the drone, and then you will surely be able to use them at their maximum potential. Here are the intelligent flight modes that you can use on the MJX Bugs B7.

Follow me mode: This flight mode will make the drone lock onto your smartphone and follow it from behind. So for example you can keep your phone in your pocket or backpack and you’re ready to make a nice cinematic shot.

Waypoint: This is probably the best smart flight mode if you want to capture nice landscapes. In this mode you have to draw a flight path on the map provided by the map and the drone will fly on that path.

The Bugs B7 might be the best quadcopter released by the MJX as shown in the above review. It has a really nice design and it comes with some useful features. Not to mention the 4K capable camera. However, it might not be as professional as the Mavic mini, who has a longer range, and some better flight features. The advantage of the Bugs B7 is its price. You can get one for way cheaper than its competitor from the DJI. So after all it’s really up to you and the purpose of the drone which one you want to have.

If you want to purchase the MJX Bugs B7 you can buy it from Amazon, Geekbuying, and Banggood.