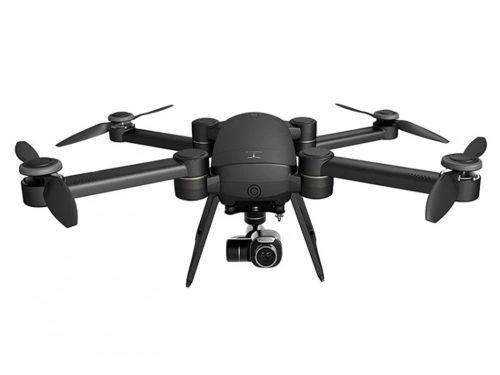 Foldable drones have been around for a while now. It’s a super practical function that makes it easier for drone users to transport it. DJI Found out this a long time ago, and now more and more companies are on their way to cerate as many foldable drones as they can. Besides this, the drones are not only foldable, but they are coming in smaller and smaller with a better camera. The GDU company used this foldable trend and created a masterpiece in the form of the GDU Byrd Premium Quadcopter. Now let’s take a closer look and see why is this drone so special,

The drone has a pretty well-designed shell. It comes in black colour, and the arm is placed in an X shape. On the top, you can find the logo and the power button for the drone. The drone has a landing pad as well which is especially useful in his case. I say this because the camera is placed under the drone, and without the landing pad the drone would land on the camera, which would get serious damages.

Now, this is definitely not a mini quad by today’s standards. In his folded form the drone measures 273x223x107 mm, and when you unfold it, it measures 622mm wheelbase. With the battery, the drone weighs 1890 g, which is almost 2KG. This means that the drone has to be registered to FAA unless you don’t want to get a serious penalty. To move weight like this you need some serious motors as well. That’s why the GDU Byrd is built with some powerful brushless motors.

GDU built the drone to be rain, dust, heat, saltwater, and cold-proof. But to ensure the safety of the drone you better avoid these circumstances.

The Byrd transmitter is very familiar for those who know the DJI Phantom series. Almost in every aspect but the colour scheme looks like it came from the same factories DJI produces theirs in. The controller quality is really high-end with a solid weight and a good touch. This way you can hold the transmitter for a long time, without hurting your hands.

The transmitter works on a 2.4GHz band which allows the drone to fly in a 2KM range from the controller. This is a huge range, which shows how premium drone this is.

Because of the big shell of the battery the drone can carry a big battery as well. The battery in this drone is a 6700mAh 4S LiPo battery. The battery has to be inserted in the middle of the drone. The battery is a modular battery which is very easy to insert or remove.

With one battery you can get 30 minutes of flight time. Which is a huge advantage if you’re a professional video maker.

Yes, the remote controller and a battery are great on this quadcopter. But without a good camera, all of this is worthless. However, the camera on this beauty won’t disappoint you.

The camera on this quadcopter is a 4K one, which can record in 30FPS. This is a huge thing because most of the 4K cameras can record only at 15 FPS which is kinda bothering.

The camera also has a minor fish-eye effect that appears at the edges of the video. But that’s normal for a sports camera. The still photos are made with a  12MP via the F/2.8 sensor. This is above average when you compare with others in the same class, like the Yuneec Typhoon Q500.

Also, the GDU made it available for the Byrd to be compatible with other gimbal designs as well. So you can attach any other sports cameras under the drone. The default gimbal on the drone is a 3-axis one, which offers maximum stability during yaw and pitch movement.

Unfortunately, there are no big intelligent flight features. But the basics like the Return-to-Home function works pretty well. So this drone is really for those who already know the basics of the done piloting on a higher level.

Regarding the facts that the drone is quite big, with strong motors and no sensors you can cause serious in the drone on its environment if you can’t control it properly. Therefore, if this would be your first drone, I would recommend you to get another drone until you learn the how’s of the drone piloting.

The GDU Byrd from this review is a well-built quadcopter, with really high-end features, no wonder they gave it the Premium name. The battery can make this bird fly for 30 minutes, which is a huge time compared to the other drones in this category. Other than this the remote controller can fly this drone 2Km away from you. The camera also works really well, because it can capture in 4K in 30FPS which a pretty unique thing. Unfortunately, the drone doesn’t have any good intelligent flight modes, so when you want to create a cinematic recording, you’re on your own.