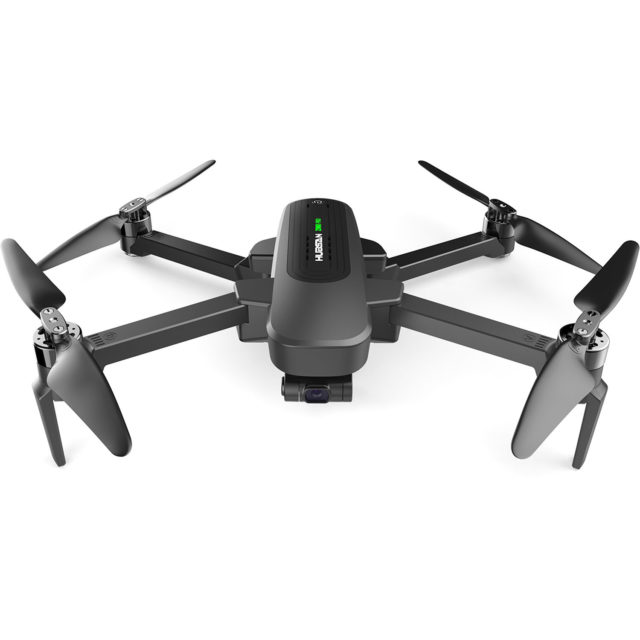 The Hubsan Zino Pro is a 4K camera quadcopter that comes with some amazing features and costs less than $500 as you’ll see in this review. It can record 4k videos at 30fps and take some amazing high-quality images that even professional photographers would be pleased with. The camera comes with a dedicated video processing chip from Ambarella and an image sensor from Sony. It comes with dual GPS systems and several smart flight modes and has a flight time of around 23 minutes

The Hubsan Zino drones always had very nice designs, and the new generation drones have the same aspect. The Pro looks very similar to it’s younger brother. However, it has an all-black colour scheme instead of white, so you won’t mix up. Actually I prefer the new black colour. It has a more stylish look and somehow it makes it look very stealthy and futuristic. There is also the logo placed on the top in green, but it’s not too big or bold. However, they kept the best feature of the drone, which is the foldable design. This can make your life so much easier, and you won’t face big challenges when you transport the drone.

The Zino Pro is not that big of a drone. it measures only 30.4×25.24×9 cm when it is unfolded. As for the weight it weighs around 700g (with the battery). This means that you will have to register it to the FAA if you live in the UK, Canada or the USA, all this if you don’t want to get a serious penalty.

The drone was made with high-grade ABS plastic which feels like a high-end drone. But it not just feels nice, but the material is also very solid and it won’t break in a light crash. The drone also comes with powerful brushless motors that help the drone fly faster and have better control. The drone has a top speed of 36 km/h, which is a pretty nice speed. Also, a brushless motor is usually more reliable, makes less noise and they require less maintenance.

Like most drones, the Hubsan Zino Pro is also enabled with some nice LED-s. These LED lights are pleased underneath each rotor. The two front LEDs have a green light, while the back ones have red lights. This makes it able to fly in the night time and to inform you about the orientation of the drone. Also, before the first flight, they indicate to you about whether or not the drone is calibrated.

The drone comes with a 3000mAh battery which is enough for 23 minutes of flight time and it takes 180 minutes to charge it. The battery is easy to remove so if you get some spare batteries you can change them in a second and you can multiply your flight time.

The controller is also made very well. The controller has its own battery, so you don’t have to mess with cell batteries. However, the best part is still the fact that it has a control range of 4KM. In crowded places, with a lot of signals going on it can be less with a few hundred meters, but it’s still a nice range.

Let’s talk about the main feature of this drone, the 4K camera. This is a really high-end, professional-level camera that will allow you to record all your nice memories in a good resolution. With this drone+camera combination, you’ll be able to make those awesome slow-motion videos of nature or any other event. A few years ago a 4K camera drone used to cost around $1K but not anymore.

Manufacturers always do their best to create the best drones, with the best features for the lowest price possible. So drones like the Hubsan Zino Pro with a 4K camera are now way more accessible than before. The camera 4K videos can record only at 30fps, but if you reduce the quality to 2.7K which is also a nice resolution you can make videos at 60fps.

The camera is supported by an advanced 3-axis gimbal that will eliminate most of the shakiness, distortion or jello effect from your videos. This also camera has a wide-angle lens and with a fisheye effect. This is very practical because you’ll get to record a wider area. The 3-axis gimbal allows you to rotate the camera in multiple directions to get the angle you want.

The drone and the camera also have an FPV feature. The video from the FPV is streamed at 1080p, which is more than enough. Most of the mobile devices don’t even have a 4K resolution screen, and the best they can play in 1080p.

Hubsan have really impressed us with their Zino drones, not just with their appearances but with the performance as well. The Zino Pro flies as you would expect from an expensive drone. It’s smooth, quiet and very responsive. But the flight options like the altitude hold also works well, it’s very important to have a drone that hovers steadily otherwise your photos and videos will be shaky.

Besides the strong motors, the drone also has some pretty neat features that will take your flight experience to a whole new level. Let’s see what kind of features you will find on the Zino Pro Quadcopter:

The Hubsan Zino Pro from this review is an affordable 4K Quadcopter, so if you’re looking for such a drone you don’t have to search anymore. It will cost you way less than a DJI drone, and it also comes with a lot of flight options which will help you in the movie-making process. The only disappointing thing about the drone is the fact that it doesn’t have any sensors on it, but if you’re careful enough you won’t even need them. The flight range and the flight time is also pretty good, and I’m sure you won’t be disappointed with them.

If you want to check out its price you can do it on Amazon or Gearbest.