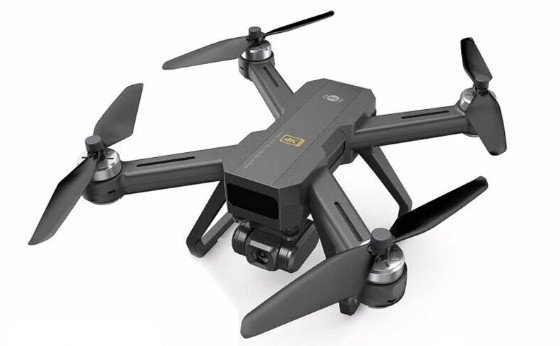 The MJX B20 Quadcopter from our review has a very eye-pleasing design. At first look, it might seem like it’s a foldable drone, but it’s not. However, it’s still a small enough drone that you can carry around. It also has a good camera, which can help you to record your best moment in life from an aerial point of view. It’s a nice little drone that can fit everyone, both beginners and more experienced users. But if you want to get a closer a look about all of its details like the controller, batteries, flight options read this MJX B20 till the end.

For those who are more experienced in the drone business, the drone might look familiar. In fact, you can a lot of similarities between the MJX B20 and the Mavic 2 Pro, not just the drones looks the same, but even their controllers have some correspondence. Which is not a bad thing, because we all love the look of the DJI products. However, they are alike just in the look, not it the functionalities too, because the MJX B20 is a still, non-foldable drone.

As for dimensions, the MJX B20 measures 15 by 15 by 5 inches and weighs 543g. So we have a medium-sized drone here which you will have to register to the FAA. The drone is built with 2204-1620KV brushless motors, which is a great choice. You can expect high performance from the motor. Also, because it’s brushless type it won’t heat up that fast, it makes less noise and will be easier to maintain. Also, it can face wind pretty well, up to type 4 wind resistance. The top speed of the drone is somewhere around 40 km/h.

The drone’s body is coated with a high-quality ABS plastic which protects all the electronic parts inside. The coating has darker grey colour with some minor details on like the logo and the air wents. As I said in the introduction it’s not a foldable drone, and it also has some legs which are used as bumpers to protect the camera beneath the drone.

You will get a 7.6V 3400mAh battery for this drone. A single battery will give you around 22 minutes of flight time. However, this time can be influenced by the environment, so don’t be surprised if at the 18th or 19th minute you will get a low battery alert.

The battery is a modular one, that is easy to remove and totally safe for everybody. The charging time for the battery is around 300 minutes.

The remote controller for this drone is a small, and compact one. It has a black colour, a foldable antenna and phone holder, a small LCD screen and some buttons and switches. So you’ll get anything you need for a drone controller.

The transmitter can give the drone a 600 meters max flight range, with a maximum on 120 meters altitude. But whenever you’re going near to the limits the drone will alert you so you won’t get too far. Also, the controller will notify you when the battery on the drone will go on a critical level so you can land it safely.

The B20 is equipped with a 4K camera, which is one of the best options you can get out there. But the sensors inside the camera re not as good as in a 4K camera in any of the DJI drones. Also, it has only a 1-axis gimbal and some built-in electronic image stabilization, which can never be as good as a hardware image stabilizer. But it’s better than nothing.

With the camera, you can capture videos in 4K at 30FPS, but if you reduce the resolution at 1080p (which is the optimal resolution for every device) you will be able to capture in 60FPS. All the footage taken with the drone can be stored on a MicroSD card, which has to be inserted in the drone. It can support up to 128 GB. It’s better to save your footage on a card, rather then wirelessly on your phone, because in that case, you might lose some footage if you’re going out from the range, or if the app froze down.

You also have a FPV option with the drone, so you can watch the live feed of the camera on your phone. Regardless of the resolution are you using on the camera the output on your phone will be 720p. The maximum FPV resolution for the FPV is 450 meters, which is quite good. You can attach your phone on the remote controller, so you’ll have everything at one palace. And finally, you can control the camera angle in 130 degrees from the controller, so you get the best angle for your shots.

As you saw earlier, it’s built with a strong brushless motors wich with you will be more than satisfied. It can do nice punches and it’s in great synchrony with the controller so you’ll get a nice response from the drone. The drone also has some built-in GPS, which will give you greater stabilization and better accuracy when using flight features.

The flight features present in this drone are the point of interest, waypoint mode, follow me mode and auto return home. These will be very handy in some situations if you want to make a memorable but cinematic video captures with the drone.

The MJX B20 Quadcopter is a very well built drone as seen in our review. Every part including the controller, battery, the camera is on point and together will give you a great experience. If you’re a first-time flier make sure to read all the instructions in the manual and respect them.

If you’re considering buying the MJX B20 you can check out its price on Amazon, Banggood or Gearbest.