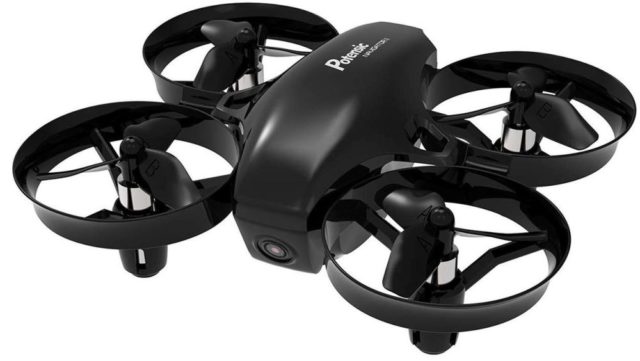 In this article, we will review the Potensic A20W quadcopter which is a mini-drone dedicated for children.  A mini-drone is like a regular drone in a miniature version. There are even smaller drones, called  “Nano drones”, like the Syma X20 that are is small that you can hold it even with a few fingers. While mini-drones have the size of your palm.

Because they’re more affordable than a camera drone, they’re able to fly indoors and still be crash-proof, it’s a perfect gift for a child. But it’s good for adults as well, most people learn to operate these before they move onto the bigger models, witch cameras and more complex systems.

Unfortunately, a mini drone doesn’t have all the features you’ll find on a regular quadcopter, but if you’re a rookie in the world of drones, mini-drones are a great point to begin your adventure in the drone world.

But let’s get to the important question – is it worth it to get the Potensic A20W, even though it’s a cheap drone? What do you get for the money? How reliable is this drone? The good news is that you’re going to find out all of these questions in this Potensic A20W Quadcopter Review, so you will have a clearer view about the drone and it’s specs without spending a single dollar on it. Shall we?

First of all, let’s see the specs of this mini-drone:

As you can see this is a very compact and light drone. It measures only 3.5 X 3.1 X 1.25inches, so it won’t take up much space and you can take it with you anywhere. The drone has 360-degree protection around him, so the propellers will be safe in the case of a crash.

Due to its weak motors that can’t resist wind the drone works better in closed environments. So you can calmly use it in your house. Just make sure you don’t hit anything fragile with it.

Due to its small size, the drone can have only a small battery, so the max flight time you can get with this drone is around 5 to 8 minutes, depending on some factors like the temperature, your flight style, etc. However, the guys from Ptensic know how much you love to fly and they decided to get you 2 batteries in the package, which means that you can double your flight time.

The camera may not be the best part of the drone. So the video and photo rendering is of low quality. Also, the angle of the fixed camera is not placed in the best way possible. But at least you have an FPV feature that comes with the camera. For that, you’ll have to download the manufacturer’s app and connect it to the drone, and then you’re free to go to see the drone’s camera live feed.

The drone may be small, but it’s still packed with some nice features that will make your flight time even more fun and more enjoyable.

This is a very simple, but really useful feature which kicks in when you release the throttle stick and the mini drone will be locked at a certain altitude. This makes controlling the drone much easier and stabilizes the camera for when you want to take a photo or video. Super useful for beginners.

You have a button on the controller which will make the drone fly up automatically and stay in the air until your next command. After it’s in the air with the same button you can command the drone to land, and the drone will fly down slowly and land on the ground. After the landing is done, the propellers also will stop.

If you don’t fly the drone to great highs the low battery won’t be a problem for you. But it’s still better to have an alarm for it. So when the drone’s battery is running low, the transmitter will send you an alarming sound and remind you to land the drone ASAP.

This is a feature that usually just the bigger camera drones have. But the manufacturers from Potensic have taught that it might be a good idea to implement in this drone as well. With this feature, you have to open the app and draw a path on the screen. The next thing you see is your drone following the path you planned for it.

This is a fun mode, which can train your motoric sensors. With this feature enabled you can control the drone by tilting your phone. The drone will do the exact same thing and will fly in the direction you tilt.

Don’t be misguided by the size of this drone, because it can do way more than you could imagine. There are some parts that could be impoverished, but taking in mind that it’s a toy drone, it’s perfectly fine. The controls are easy, and the drone is packed with a huge number of flight modes; usually, drones of his size don’t have this many features.