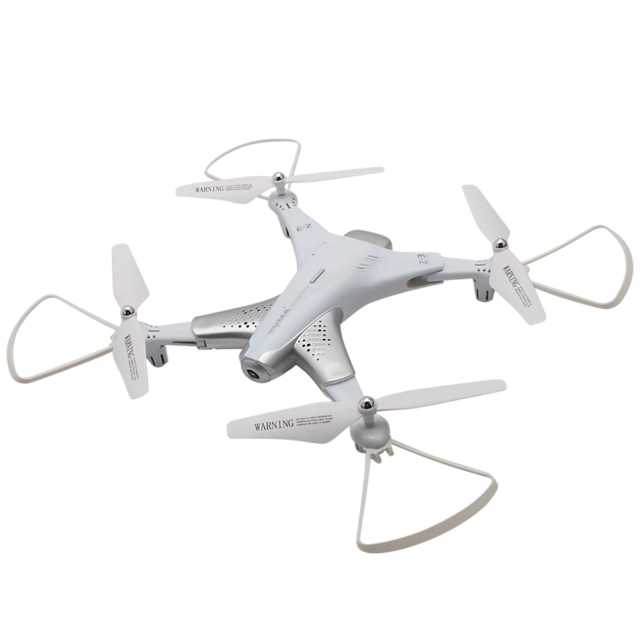 The new Syma Z3 Quadcopter that we’ll review in here is a really nice foldable drone, which is ready to fly and doesn’t require any assembly. The drone is easy to control and safe, so it can perfectly fit you if you’re a beginner.

It also has a camera which is a 720P HD one, so you can even exercise creating some content with it. And just like any other drone, it has an FPV function so you can see in live feed the camera’s action. The manufacturers also incorporated some functions in it like the optical flow positioning, gravity sensor, altitude maintenance using gravity sensor, flight plan, a key for takeoff and landing, headless mode, 360 rotation, automatic movement, and high/low-speed switching.

What this means, is that you won’t be bonded using the drone. But if you want to find out more details about the drone I recommend you to read this full review about the Syma Z3.

The Syma Z3 is really compact and easy to use. It’s way more practical than the Syma X8, which is a bigger drone like the Phantom 4. The design of the new quadcopter Syma Z3 is a more rounded one. Also, the landing gears are much shorter, which serves greater stability during hard landings. Nonetheless, three is a nice feature around the propellers, because the fasteners of the propeller are also protected by chrome plugs from dirt and dust.

The drone also has LED backlighting to create a better piloting experience. The lights on the drone have two different colours: red on the front and green on the back. This way you will also know which is the front and back of the drone.

The Syma Z3 is also a foldable drone, which makes it easier to transport it from point A to point B. Last but not least the drone equipped with four brushless motors. They are powerful enough to secure a safe and dynamic flight. These brushless motors can have a pretty nice performance even in some windy weather.

The battery for the Syma Z3 is 850 mAh. The battery is inserted into the compartment located on the backside of the drone. There are no visible wires, the battery can be easily inserted and taken out with just a click.

The SYMA Z3 drone is remotely controlled by a smartphone or the provided controller at the same time. The operating frequency of the console is 2.4 GHz, and the max control range is 80 meters, which is not too much but for a drone like this is understandable.

The smartphone could be used only if you download the Syma Go application, which can be found using a QR code printed on the Z3 case or searched on Google. With the application, you can also get an FPV feature. The image from the drone’s camera is transmitted to the phone’s screen. At the same time, you can also control the drone with the joysticks, but it’s a bit harder this way because you can’t physically feel the button’s placement on the screen. On the screen, you can also see information about the battery status, satellites and the current camera status.

The camera of the Syma Z3 can record in a resolution of 1366×768 pixels at a speed of 15 frames per second. The resolution might be good, especially for small screens, but the FPS is kinda terrible. So you won’t be able to create amazing, artistic footage with it.

As you saw in the introduction the Z3 from SYMA is primarily aimed at new users who desire to have a taste of how life looks like a drone. These low-quality cameras are not designed for professional photography or filmmaking.

In terms of flight experience, SYMA Z3 showed better results than you might think of. All the controls are very sensitive and responsive to your commands, which is very useful for beginners. You also have two different speed profiles, and by switching between the two speeds, you can select the priority of thrust or controllability. The drone flawlessly performs all the integrated automatic features like takeoff and landing and keeps well at one point.

Another feature like altitude hold works well only at maximum load. Where it is in slow mode, the wind can easily blow the quadcopter. The “Point of Flight” function is good, but it works without GPS navigation, so the drone only performs manoeuvres along a given route without knowing where he is. The drone is set for the flight, but before the flight, the drone is calibrated. To do this, follow the instructions on the users manual.

As we said multiple times that the Syma Z3 Quadcopter from this review is dedicated to beginners. All the controls work very fine, which is just perfect for this kind of user group. Also, the drone has a lot of intelligent flight options which will help you a lot in navigation. The only bad part about the drone is the camera, which is only 720p. That doesn’t mean that it’s unusable, but that you won’t be able to create high-quality photos and videos with it. However, you can still learn with it how to use a camera drone. And when you got into the game you can upgrade it to a better one.