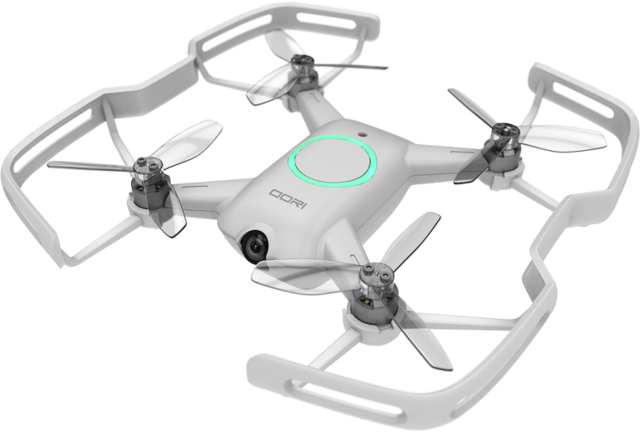 You can tell just by looking at the name of this drone that this is an exceptional drone. The UVify OOri Quadcopter is the very first smart racing drone for the consumer layer as you’ll see in our review. We have already shown you sick little racing drones like the Eachine BAT QX105 or the Walkera Furious 215, but none of them had features or design like this one. A racing drone usually has only the ability to show an FPV image, but this one has more inside.

Not to mention his incredible speed of 50mp/h (80km/h). But because this is a racing drone, that doesn’t mean that it is necessary only for professionals. Beginners can use this drone just as well as a more experienced user. Without further ado, let’s dive deeper into the specs of UVify OOri and see what this little drone is capable of.

The drone is ready to fly drone, which means that it doesn’t require any specific assemble. You just need to calibrate it and insert the batteries, and it’s ready to be piloted. The drone is quite sturdy, but some parts like the propellers might be fragile, especially at high speeds. To prevent breaking them, always use the prop guard to assure the safety of the drone. But to be sure, always take good care of the spare propellers, you may never know when you would need them.

As for the size, this is a relatively small drone measuring 3.5×3.5×1.2 inches, that’s why it is referred sometimes as palm drone. It weighs only 73g without the battery, but even with the battery is not more than 250g. So there is no need to register it with the FAA.

Besides the practical build of the drone, it is also a very stylish one. The drone comes in a white color, which looks stylish. And it’s also a convenient color because this way it will be easier to recognize in nature. The white color with the black lens of the camera is like an eye set right at the center. The arms are coming with some LED lights, which is useful and good looking at the same time.

Usually, racing drones don’t come with a controller. You have to own a universal one. And the controller you got in the package is a pretty good one. It’s a stylish little controller, with some accurate and responsive controls. And last but not least the controller also has a built-in 1.5 by 2-inch FPV screen. So there is no need or possibility to connect the camera on your phone. The maximum range on the controller is 500 feet. Which is just right for a racing drone.

Due to its size, the drone uses only a 600mAh capacity battery. It can only provide 5 minutes of flight time, so it’s advised to get multiple batteries. The batteries charge fast; it only takes 30 minutes to charge them fully. The drone has some safety features regarding the battery. On the FPV screen, you will see a warning when the battery starts draining, and when there is only a few per cent left of the battery the drone will automatically initiate a landing.

Besides the fact that it’s not a camera drone, it still has one. However, it has only one purpose, to be most comfortable to pilot with it. The camera angle can be adjusted so you will get a perfect view. The drone’s camera is connected to the remote controller on a 5.8GHz band. This provides a shorter range, but a more stable video feed, which is just perfect for a racing drone.

While for other drones, the camera is the main reason why people buy the drone, in the case of a racing drone, the most crucial part is the performance and the speed. And this little drone won’t let you down because it’s able to fly with an incredible speed of 80km/h.

However, if you’re a beginner, start to use this drone at a lower speed, and as your piloting skills progress, you can use higher speeds. The drone is built from ABS plastic so it can break easily if you crash it to something with a high speed. So always be careful, not to hurt the drone or anything else when flying with high speed.

The UVify OOri Quadcopter from our review is well built little drone. It has enormous power in it and charming design. The range and the flight time are not that big like in the case of a camera drone, but for racing purposes, it’s more than enough. You also won’t be able to take photos or videos with it, but you can win races with this little beast.

If you’re interested in the price of the UVify OOri you can check out Amazon.