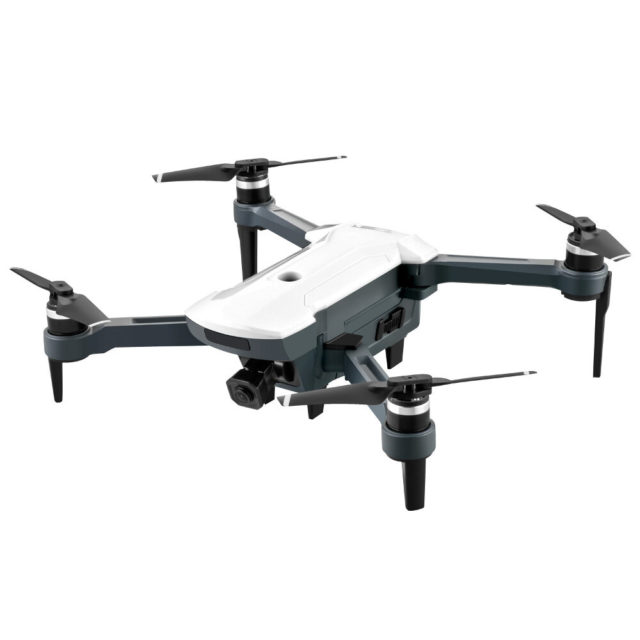 We have reviewed many drones that cost around or under $100. But most of these drones were toy grade drones, with very low to non-camera. However, The Aosenma CG028 is a cheap drone which has a lot of features. This drone can do way more than just flying around. First of all, it’s a GPS drone that comes with some advanced features included. The camera on the drone is a wide-angle HD camera that can be remotely adjusted while capturing amazing photos and videos. Besides, it has 3 intelligent flight modes and a decent flight time. And all that for less than $100. If the Aosenma CG028 Cheap Quadcopter from this review sounds too good to be true, then read this article and you will find out whether or not the drone is worth it?

The Aosenma CG028 doesn’t look like a cheap drone. It has a really nice and contemporary design, it doesn’t stand out design-wise. And this nice design is paired with a brushed motor. However, the best part about its design it’s the foldable part, which is a huge trend nowadays. They are compact, smaller, more practical, and they are just as sturdy. Only it’s easier to carry it around. And as a bonus, it comes with a nice grey Styrofoam carry case, which will be a safer way to transport and store it.

Many of the drones don’t have a carrying case included, especially not those which costs $100. One of the best feature on this drone the GPS module inside. This is a fantastic feature, which keeps the drone more stable in the air, and the map functions are more accurate. Also, thighs are the feature that makes automatic return home possible.

The drone weighs 352g, which over 250g, so even if it’s a relatively cheap drone, you’ll have to spend some more money to register it to the FAA if you live in the USA, Canada or the UK. This weight paired with the powerful motors is a perfect combination for outdoor flight, even in light wind.

The drone comes with an 11.1v  1500mah Li-Po battery. The battery is a modular one, so you can easily remove and charge it. One battery has an official flight time of 25 minutes, but this is the best-case scenario. In reality, you will get around 20 minutes of flight time with one battery. But the manufacturers offer you multiple batteries contra cost when ordering the drone. The maximum number you can get is 3. So if you order 3 batteries, you’ll have a flight time of one hour, which should be more than enough. One battery takes about 3 hours, keep that in mind when you plan a flight with your drone.

The remote controller is also has a really nice look. The simple and minimalist design is paired with an LCD screen in the middle that displays telemetry info about the whereabouts and stats of the drone. For example, you can see how many satellites the drone is connected to, signal strength, battery, range, etc. On the top, there is a thing, that looks like an antenna, but in fact, it’s just a pair of fake antennas, and they offer only a visual purpose.

The controller is powered by a built-in lithium polymer battery that lasts a few hours, and you can charge it in 30 minutes. The controller has an overall range of around 800 meters and for FPV the range is much shorter at around 500 meters.

For the FPV feature and the intelligent flight modes, you’ll have to download the app which is called the VS GPS. The app is available for both Android and iOS devices.

A drone is pretty much worths how good the camera is. This should be the main thing you look for in a drone. Luckily this drone has a pretty good camera. On the paper, it can record in 4K, but in fact, the video resolution is no more than 1080p. But that’s a pretty good number too. Of course, it may not be as details and sharp as a DJI Mavic Air 2. So it can’t be used for professional purposes, but it’s good enough for personal usage.

Unfortunately, there is a micro SD card slot on the nose of the drone. So all the footage will be saved on your phone. Therefore you should be extra careful, not to go out of range, because then the videos will be glitchy.

Even though we talk about a cheap drone, just like we mentioned before, it has some intelligent features. The intelligent flight mode features on the drone are Follow me, Orbit mode and Waypoint. There are one of the most used features, that can enhance a video with cool effects. Besides, it has all the basic features like a return home, one button takes off and so on.

This is a cheap fun drone that can bring you a lot of fun while you’re flying it. It’s suitable for everyone, but it will be used most likely by beginners. If you need a new hobby, or just a new gear, the Aosenma CG028, is a great deal for just around $100.

If you wish the purchase the Aosenma CG028 you can do it on Baggood.