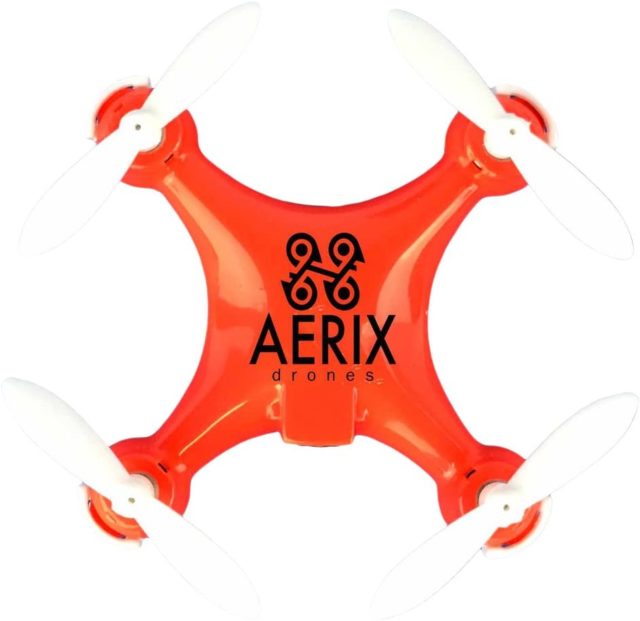 The Axis Turbo-X Nano Drone looks like a toy, but in fact, it’s classified as a quadcopter. It’s a light and tiny, and it’s one of the best nano drones you can find. It weighs only 14 grams and is definitely one of the cheapest drones you can get. This quadcopter is usually used by kids because it can’t harm anyone or anything, and it can be used only for entertainment purposes, like flying it around in the living room or the garden. The motors can reach a speed of 30 mph and it will cost you less than $45.

The Turbo-X is controlled by a standalone controller, which is the storage box as well. If you’ve never used a drone before, you will get to it easily. The controls are easy to learn, and with the help of the users manual, you’ll become a pro in no time. The Turbo-X Nano Drone is also pre-programmed with a series of automated features like rolls and flips, for stunt pilots and show-offs.

The drone itself is really small, it weighs only 14 grams and measures 42 x 42 mm. So the manufacturers came up with the great idea of placing the drone inside a huge controller that works as a carrying case as well. The drone, as well as the carrying case, is available in red, orange, green and blue.

The setup for the Axis Turbo-X Drone is one of the easiest ever. You only have to power on the drone and push the left joystick on the controller. Therefore it’s an RTF (Ready To Fly) drone, which requires no assembling or unfolding. The drone is powered by brushed motors, which means that the Turbo-X is a loud drone, so you will hear every time the drone gets in the air.

The drone also has a pre-installed advanced stabilization system within, so it will stay stable in the air. Also, due to some built-in tech, the Turbo-X is capable of doing incredible mid-air manoeuvres, like flips.

However, once you get the swing and a delicate touch of the controller you will be impressed with the handling and how sensitive it is. You can bank quick and hard in any direction and your quad will automatically return to centre.

As I said, the Turbo-X’s controller is the case as well, There are only a few buttons in the controller, that being the power button, the joysticks and other direction buttons. The quad works with a 4-channel, 2.4 GHz system, which is powered up with triple-A cell batteries, those you have to get on your own.

The drone is a small one, therefore it can bear only a small battery as well. The battery provided for the drone can provide about 5-7 minutes. However, it has a good part as well, because it takes only 20 minutes to get it fully charged again.

The Turbo-X comes with some pre-programmed features, that will make your time spent together more fun. The most fun is the 360 degrees 3D flip-and-roll function. First, make sure there is enough space to perform the manoeuvre and press in the right joystick and you can activate the 3D flip-and-roll program. After that, push the right joystick in any direction you want to perform the flip.

The second very useful feature is the speed settings. There are 3-speed tiers on the drone, so if you’re a beginner you can start on a low speed till you get used to the controls. And as you gain experience you can switch to higher tiers, so you’ll have more fun.

This is a perfect toy-grade drone. I say this because it has a very creative and practical transportation box which is the controller too. So from the moment you saw the drone, it will bring joy to you. An adult person might not like it as much as a younger folk because it has no camera therefore it’s useless for professional purposes, but for playing around it’s perfect. The recommended age is 14+, but with enough attention, even younger kids can use it.

If you wish to buy the Axis Turbo-X Nano Drone, you can do it on Amazon, (2nd link).