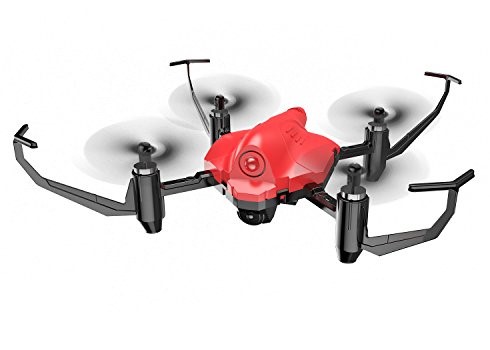 On this site, we’ve presented you with many fun drones. Some of them have implemented AR games in the app, some of them have fun accessories like the Wingsland S6. These drones are usually made for fun. These have the camera only to give FPV view, but you can’t make high-quality footage with it. The drone we will present in this review, the Deerc HS177 Quadcopter is also a drone like this. It’s a small drone, which is fun to use. It has an interesting game that comes with the drone.

The drone is a small quadcopter, that it super easy to store because it’s small size. In the package, you get 2 shells for the drone, that are easy to change. Both of the colors are vivid, strong colors, that is easy to observe anywhere. One of the shells are blue and one is red.

About the functionality of the build. The drone has by standard a propeller guard, which is useful since this is more of an indoor drone, where is a lot of things that can mean danger for the drone. The drone is small, light, and built from a strong material. So even if you somehow manage the drone it will survive.

The drone has a small brushed motor, but for this one is perfect enough because it’s light and even a small motor is enough to get the drone in the air. The drone has 3 speed modes, and in the higher mode, it’s pretty fast and agile.

Due to its small size, it can only bear a small battery. The battery you get with this drone is a 3.7 V 250mAh LiPo Battery and it can give you the drone around 5 to 6 min of flight time.

The main and most standard feature of the DEERC HS177 quadcopter is the altitude hold. It basically lets you hold the drone steadily at a default height. So when you take you hands off the controller the drone still stays in the air, at the same position rather than falling down. This is especially useful for beginners and kids who are no into only just getting into drone piloting.

Another great feature that almost every drone has is the headless mode. If your drone is disoriented, or you’re just not sure where the drone is facing, this mode will help you out. When you press the dedicated button for this, the front of the drone will face the controller, and you can easily bring the drone to you.

The DEERC HS177 quadcopter also features one-key take-off and landing. Which means, that when you want to start your piloting session, just power up the drone, press this button and the drone will instantly get into the air.

The drone has three-speed modes. It’s recommended to start at the lowest speed mode, and when you got into the controls then switch to the second tier. Use the 3rd speed mode only, if you wish to complete a race track with this drone. The drone can move really fast, and if you don’t master the drone it can crash into something easily.

The last one is the one key flip feature. This isn’t something useful, or indispensable. It just looks cool, and it’s a good way to show off with feature. Before you make the trick, make sure you have enough room to perform the trick.

This is the most fun feature on the drone because it’s an active game that you can play with others. The drone basically shoots an infrared laser, letting you compete and battle with opponents. For this, you should have 2 Deerc HS177 Quadcopter like in this review, because you can’t compete alone. Also, it’s recommended to use a different colour for the players. This is a very fun way to spend time with friends and family members. The drone will land after four hits, and the other player wins. So in your battle, you should be very tactical, and careful not to hit physically the other drone.

What others said about the drone

“These are cool! It took me some tries to figure out how to control it well but now that I’ve got it it’s a lot more fun. Do not fly on a windy day- you will lose! I have seen large dragonflies check them out while flying with my boyfriend. The downside is that the battery only lasts about 8 minutes but it is a long 8 minutes when you are flipping and shooting at a partner. Seen pretty durable though my boyfriend smashed his into something one of the first times flying and one of the guards broke off. Comes with extra parts.” – Cara

“I ended up buying two of these individual units instead of the “combo pack” because it was cheaper. They arrived quickly and setup was easy. They came with two canopies, so I am able to have two different coloured drones. Flight control is pretty good. Altitude hold works very well. It works best on rate 1 but has two higher rates. They are very hard to control in a small room on anything but rate 1. The only bad thing about this is that one of the controller sticks gets stuck when rolling full left, but other than that, they work great. The battle part of the drones works very well too. Flight time is decent at around 4 minutes.”-P.N.

“I own many drones/quads and these are by far the ultimate fun. The BEST thing of all is my wife (not a drone fan) is having fun learning to fly & beating me at battles! GREAT product! Very smooth & easy to fly, built tough and can handle crashes, the four “HIT” features are impressive. Playing time is good. played about 3 battles with some free flying as well. Now to see how well these will hold up? My only (minor)negative is the battery connection. Best if you plug it in first then slide it into the unit. Tail stub makes it hard to easily connect.”-Linnea

Does this drone need to be registered?

Four-channel, does that mean you can buy four and fly at the same time to battle?

How long does it take to fully charge?

Does this have a camera?

The battery comes wrapped in plastic, should I remove it or it is part of the battery?