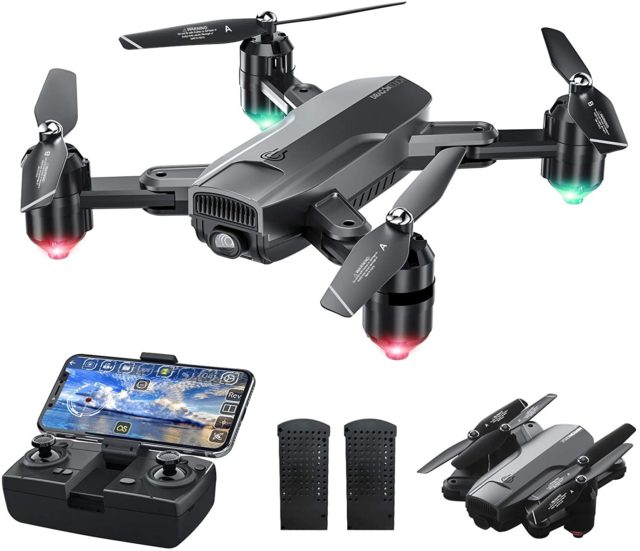 The Dragon Touch DF01 is a good looking drone. It has a foldable build, and a nice, minimalist black color. But the specs on this drone are that good. It has a low flight range and flight time. So at first look, it might seem like a professional drone, but the specs on it are like a toy drone. The good fact is that you can get it for a low price. But let’s not rush ahead, let’s see what this Dragon Touch DF01 Quadcopter can do in our review.

The Dragon Touch DF01 follows the current trend because it’s a foldable drone. As for the concept, it looks like one of our recently reviewed drone, the Roku U11. It has a big black body, and the foldable arms, placed in an X shape. When you fold it, it measures only 6.7×5.5×2.4 inches, which is an ideal size for transportation. Only the second part of the arm is foldable, and the blades are still and they can’t be folded. Under each arm, you get a LED light, green on the front, and red on the rear. This way you can establish the front and back of the drone.

The shell of the done is made out of black ABS plastic. There is nothing extravagant detail on the drone, it’s just simple and clear. The ABS plastic is a durable but light material which is perfect for a drone. Also, you get a set of propeller guards for the drone which gives you extra protection. It’s a good idea to have these on your drone if you’re a beginner.

In the package of the DF01, you will find not one but two 3.7V 1000mAh batteries. The performance of these batteries is really low. One battery can give you no more than 10 minutes of flight. So with the two batteries, you will get a total of 20 minutes. Which is a small-time comparing to the other drones in his category.  For the batteries safety use only the provided charger. The batteries are easy to remove.

The controller for the drone looks like a big black brick. On the middle, there is a foldable piece where is dedicated for your phone. The controller works with a 2.4GHz bandwidth, which is enough for a 90-meter range. This range is small, so you will get to record only thing that is close to you. Besides the controller joysticks, there are buttons for the different speed switches, one key takeoff/landing, photo/video, and many others. So the main features can be accessed from the controller.

This aircraft is built with a 1080P HD camera.  The camera has a fish-eye lens and a 120-degree field of view. Due to its poor inner sensors, it can make poor quality footage in the dark environments, but in the daytime, you will be able to create crisp footages. The camera also has an FPV capability, so you can follow how the camera behaves in different environments.

Flight functions or intelligent flight options are a great way to make more cinematic footage without an effort. These are built-in autonomous options, that you can set on the app, and they will help you make better photos.

This is a great feature when you want to keep the done in a certain place in the air. You just get the drone a certain height and it will stay there you can take photos and videos more easily.

When you press the button dedicated for this feature the drone will align to the position of the pilot even when you change your position.

The drone has 3 different speed modes: slow, medium and fast. If you’re a beginner you can start flying the drone at a lower speed, and after with time, you can set to higher and higher speeds.

This feature can help you out in many situations if you wish to capture nice landscapes. Just open the map within the app, and set a route where you would like the drone to go and record. The drone will follow precisely the preset route.

How to connect the app to the drone?

Does this require FAA registration?

What does the tail flashing red light mean?

How big is this?

Does it have a return home feature?

Why the drone does not respond to control?

SD card included in the package?

Does it come with the camera?

The Dragon Touch DF01 Quadcopter from this review looks good, but it can’t do more than a toy drone. It has a really low flight range and flight time. So whoever whats to make something more serious with a drone won’t be able with this. The drone, however, is good for those who only want a drone for learning purposes.

If you’re interested in the Dragon Touch DF01 Quadcopter you can get it from Amazon.