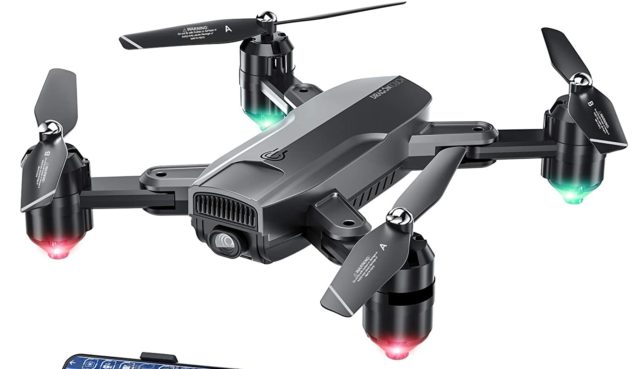 The Dragon Touch DF01G is a mid-range drone. By that, I mean that it can’t keep up with the specs of the DJI Mavic Air 2, but it can do way more than a toy drone. So both in specs and price, it stands between the two extremes. It’s a nice drone, that has a stable hover and can take pretty good quality photos and videos. The DF01G is an updated version of the Dragon Touch DF01. It has an improved GPS, and safety features like auto-return, battery and range alarm. So it became safer. Besides this, it has improved features on the inside as well. If you want to find out what are those, read through this  Dragon Touch DF01G Quadcopter Review.

First of all, this is a foldable drone, which will make it store and transport it easier. The whole drone is coated in a shiny black colour. The external shell is made out of ABS plastic. This material is strong enough to protect the drone from crushes. But it’s not that well-sealed so you should keep it away from dust or water. Overall, the drone weights 187g. Which is good news, because you won’t have to register it to the FAA if you live in the northern part of America.

Unfortunately, you get only one battery in the package. The battery is a modular one, so you have to charge it outside the box, and it’s quite easy to remove is, it doesn’t require any tool. The battery has a capacity of 1200 mAh, which in this case is enough for 18 minutes of flight time. The total flight time can be influenced by a lot of things, like the weather, temperature, flight style, etc. So don’t be surprised if your flight time will be less with a few minutes.

For the safety of the battery always use the provided charger for the battery. The charging time is about 120 minutes. Which is not that bad.

In the previous version (DF01) the controller refused to work sometimes. The signal somehow wasn’t strong enough to get to the drone. So this is the first improvement in this controller. On the front side of the controller, there are 7 small buttons and two joysticks. Each button has a different purpose, if you want to find them the users manual will give you a great explication.

Overall the controller has a nice touch, with an organic placement in your hand. It also has a phone holder in the middle, which will help you see the FPV live stream to your phone.

The battery works with 3x AA batteries, which are not included in the package. And due to the 2.4GHz frequency, the remote controller works with, and the improvements, now it can provide a range of almost 400 feet.

The drone is equipped with an HD 1080P camera. These can provide you with nice and sharp images, and videos. The lens on the camera re wide-angled, with a total range of view of 120 degrees.

One of the most important factor on a drone is the features it’s able to perform. And I can tell you that the DF01G can do a lot of features,

The most important thing in any drone is the presence of GPS. This will help in the positioning, and the app can follow the drone more precisely.

With the surround mode, the drone can record beautiful landmarks and take footage from all angles.

With this, you have to open the map, within the app and draw a route and the drone will follow it.

You just simply select a moving object like a car, or a walking person and the drone will lock on that and follow as long as he can.

This is another great feature that requires the app. After each recording, you can edit your footage by adding music in the fundal. On the original sound, you will only hear the motors. But this way you can add captive music and instantly share on social media platforms.

Will the drone come back if low battery?

Is the camera adjustable angle?

Can you use this without an app or phone to assist?

Can it be used with 3D goggles?

Is this drone water-resistant? If I accidentally fly it into a river, would it be ok if I retrieved it quickly?

Does the Auto Home avoid objects as it returns or does it need to be in a clear path?

Am I able to download my video to my computer instead of social media?

It would be returned if lost a signal?

The Dragon Touch DF01G Quadcopter from this review is great for a daily non-professional purpose. It has a nice camera and a decent flight time. The drone is made out of strong material and it even has some propeller guards, so a beginner can use it calmly.

If you’re interested in buying the Dragon Touch DF01G you can check out its price on Amazon.