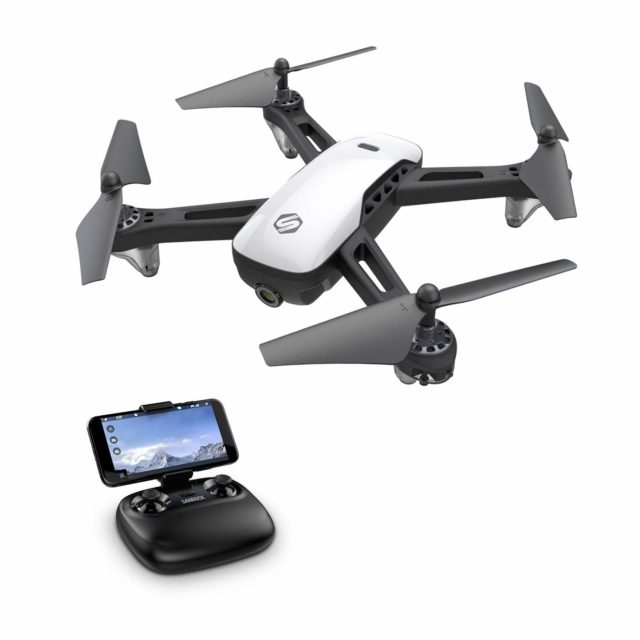 The availability of drones is immense nowadays. You can find all kind of drones, in different colours, shapes and price ranges. The SANROCK U52 Quadcopter from this review is a nice little, and cheap quadcopter that can do a lot. It can perform features like headless mode, gravity sensor, 3D flips and many more. It also has a 720p HD camera, that can record your favourite moments and beautiful landscapes. The drone most likely matches the needs of kids, because it doesn’t have those great features. However, it still has nice features. If you want to find out more about the drone, read till the end the Sanrock U52.

Unfortunately, this isn’t a foldable drone, but it only measures 12.6 by 11.2 by 2.3 inches. This way it will be a bit harder to transport it, but with a proper Quadcopter Backpack, it’s not that hard. With a good backpack, you will be able to transport your drone and it’s accessories in safety. The drone only weighs 178g, so it’s a relatively small and light drone, but the best part is that you don’t have to worry about FAA registration.

In the package, you will get 4 extra propellers in case you break or damage one of them. Also, for safety issues, you will get 4 propeller guards. So if this is your first time flying a drone, make sure to put them on and save your drones propellers and body. The shell of the drone is made out of ABS plastic, which is light and strong enough to protect the drone.

The SANROCK U52 comes with a 3.7V 1500mAh battery that is fully charged in the box. So all you need to do is to calibrate the drone before flying. The battery, combined with the weight of the drone will give you about 13 minutes of flight time.

This is a modular battery, so you have to take out the battery from the drone. This procedure doesn’t require any unscrewing, you just pop out the battery. The battery takes about 200 to charge it fully.  For the batteries safety only charge the drone with the provided cable.

The controller for the U52 drone is a compact, quite bulky device. The controller works with a 2.4GHz wireless band. This usually gives a longer range rather than a 5GHz. The max flight range for the drone is 320ft.

Design vice, the controller has a smartphone holder, which makes it easier to follow the live feed from the camera, which is about 100ft. The surface of the controller is very clean. It has only two joysticks and the power button.

The drone comes with a 720P HD camera. So the camera won’t deliver you a high quality, cinematic footage. However, it will give you decent footage, that you can share on social media platforms. In the night time and poor light quality, it will have bad quality. So if you can, try to record only in the daytime. The footage recorded will be saved on your phones footage. The camera can be adjusted vertically from 0 to 90°.

Besides the small build, the low flight range and flight time the drone has quite many autonomous features. The drone can perform the following flight features: One key takeoff or landing, 2 Speed Modes, Draw Route, Altitude Hold Mode, 360° Flips and Rolls, Headless Mode, One Key Return. To learn more about the and the correct usage of them, make sure you read the users manual.

Does this drone have battery low alarm?

What kind of mobile phone can be connected?

How many batteries does this drone have, can I purchase extra battery?

Does the U52 have a slot to use a micro sd card to store pictures/video?

Is this drone suitable for those who have never played drones?

Can I return back the drone in an emergency situation？

The SANROCK U52 Quadcopter is perfect for newbies who have never used a drone before as showcased in our review. First of all, it is cheap, so even if you brake it somehow, it’s not that big of a problem.  It has a strong shell, and you can install some propeller guards on them to make it even safer. Also, it has 2 flight modes, so you start the learning process on a low speed. A professional user will never enjoy the drone, because of its camera, but if you want a drone for a hobby it’s perfectly fine for you.

If you wish to buy the SANROCK U52 Quadcopter, you can do it on Amazon.