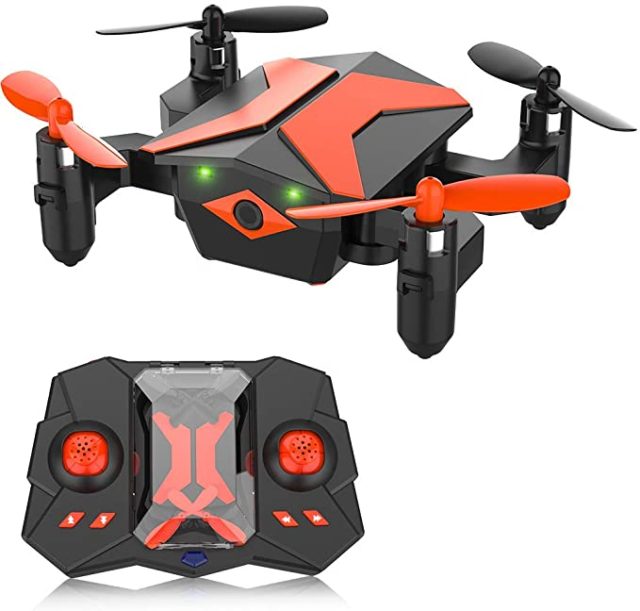 Today you will have the opportunity to review another toy drone in the person of the Attop X Pack 2 Mini Quadcopter. We’ve already shown you a lot of toy grade drones, like the  ATOYX AT-96. And some of them were good, and fun, and worth the money you got them, and some of them are just scams which were unable to work after a few weeks. Whichever will be the case in for the Attop X Pack 2 you will find out after this review.

First of all, let me start with the fact that this is an indoor drone. You can use it outdoors as well when the weather is windy, but since it has no camera on it I find it pointless to fly it outdoors. Even the weakest wind may unbalance the drone because it comes with weak motors. The only purpose to fly it outside is to learn how to fly it without breaking everything important inside your home. But after you did that, make sure to fly it only inside. The drone is really kid-friendly, so it might be a good gift idea for your teenage children. The manufacturers recommend a minimum age of 14 for this drone, but since it has low motors, with proper supervision even a younger person can use it too without any bad happening.

As I said, it’s a real toy grade drone, which means it’s really small and portable. To be more clear it measures  2.5 x 2 x 1 inches and weighs only 27 g. So there is no need for any kind of registration with this drone. And not only is it small, but it also has a foldable arm, and a really cool case for transportation. But I will talk more about that later. The drone can be ordered in two color options orange or green. Both of them are paired with a black base color. The drone is coated in ABS plastic, which is a general choice for drones. There are also a lot of drones that have a carbon fiber base, but those are racing drones and have a different purpose than this one.

The drone also has LED lights, but you can find them on the front and back of the body. Usually, they are placed under the arms, but not here. Normally, they have the purpose to give some orientation vise information to the pilot, but here it’s just to see when the drone is powered on.

The drone has a 6-axis gyro stabilization which will make the drone stable and controllable for you. There is a space left for the camera, but only the X Pack 2 Mini-Camera has a camera, there is no actual camera on the regular X Pack 2 Mini drone

All right, so this transmitter is the coolest transmitter you can ever see on the market. Because it’s not just a transmitter, but also a storage box for the drone. The drone has to be placed in the middle of the controller and it will be safe during any kind of travel. This way you don’t have to carry 2 separate pieces any time you want to bring your drone with you. This means that the controller has to be slightly bigger than the drone, and it is, more exactly, the remote is about 5.5 x 3.5 x 2 inches. However, the controller or the carrying box is still small enough to carry it in your pocket or backpack when needed.

Batteries for the transmitter are provided. But I really don’t like how the batteries have to be placed inside the transmitter. They have separate rooms, and to access and insert them you have to unscrew a bolt, so instead of just one screw, now there are two, which I believe is really unnecessary. Other than that, you can find around 6 buttons on the controller and 2 joysticks. The right joystick works as a button as fell for the headless mode. But the right button on the top of the controller has no function, it’s there only to be more symmetric. The transmitter works with 2.4 GHz frequency and its max range is about 40-50 meters. Which should be more than enough if you fly it indoors. Don’t forget that it has no camera so it always should be in your sight of view.

The drone has a built-in, non-removable 3.7V 220mAh battery. The battery should be charged by inserting the charging cable directly in the drone. Just connect the drone with a USB cable, and if the USB LED light goes on and after it turns off, that means that the battery is in charging status. When the LED light is on again, it means that the battery is charged. The battery inside the drone is a really small one, so don’t expect a long flight time. The drone can be flown for only 5-6 minutes, and it requires 30 minutes of charging which is a relatively good time.

As for the flight experience, you will get a pretty responsive and stable drone. If you take care of it, it can last for a long time. But that’s not all, it also has some intelligent features, to show off with. First of all, it has one key take-off and landing feature, which makes the flight super easy. Secondly, it can hold its altitude, which means that you don’t have to keep your hands all the time on the controller in order to be in the air. It’s also able to be in a headless mode, which can make the controlling easier, and last but not least you can do 3D flips in any direction with this drone.

The Attop X Pack 2 mini drone is an amazing and fun little toy drone. For its category is really good, but don’t have high expectations, after all, it’s just a toy drone. It has an okay flight time which is around 5 minutes, and you’ll have to charge it only 30 minutes to have your battery fully charged. Besides this, it has a 6-axis gyro and altitude hold, which can make your time with the drone so much easier. The flips are just cherry on the cake. And last but not least, you can get this drone for a really low price, which makes it an absolute ideal gift for childrens.

If you want to purchase the Attop X Pack 2 Mini you can check out Amazon, and Gearbest.