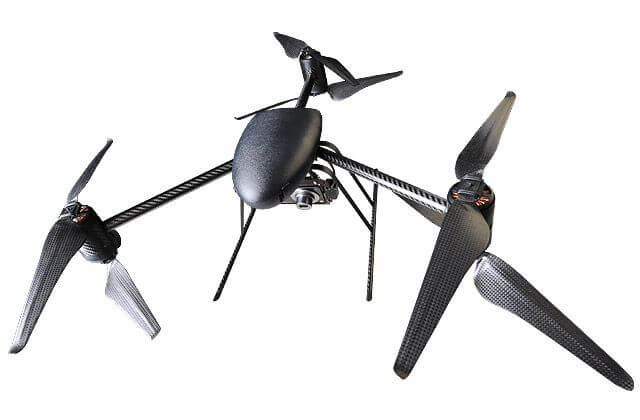 Technology has seen remarkable progress over the past years. And although people can’t fly they can still reach the limits of the sky. One of the easiest and safest solutions to do this is to acquire a drone. Nowadays many companies focus on making drones. Among them one of the best is Draganfly. In 2008 they introduced to the wide world one of the best drones, Draganflyer X6 Drone.

Draganflyer X6 Drone is basically a miniature helicopter that is remote-controlled and which can reach impressive heights of 2,400 m (8,000 feet). The user can also set the max altitude that the drone can reach. The X6 version has a camera mounted on it that can collect as much as five hundred gigabytes of real-time recording data. The camera can record at a 1080 HD quality, being able to also use thermal and low-light vision. The drone has a vibration-free part on which the camera is fixed. Its six rotors enable the drone to reach the staggering speed of 50 km/h (20 miles per hour).

As most of the drones do, Draganflyer X6 is controlled by a single operator using a hand controller. Special glasses will display what the camera records at live feed.

The Components and Features

The Draganflyer X6 Hexacopter arrives as RTF equipment. So, this absolves you from the need to buy additional components or modules, as the box comes with a copter. Opening the box of Draganflyer X6 the components that you will discover are:

The Draganflyer X6 is basically ready to take off as soon as it arrives. Only thing that needs to be done is to attach the landing gear and propellers, charge the battery and done. In addition, The carbon fiber that the landing gear and copter beams are made ensure the resistance and lightness of the drone.  The GPS sensor module and its processor 11 gives you information about the drone position all the time.

It also has a home return function, like mostly all of the multicopters from this class. This function can be activated either automatically (when signal to the operator is lost) or manually. The drone also includes a safe descent and landing function. This too can be activated both manually or automatically. These functions were put to test for the first time in 2009, when Ontario Provincial Police used the drone to collect evidence in a case of homicide. As the location of the crime was a remote area outside of Kenora it proved quite a challenge for the Draganflyer X6 at first. But the drone passed the test with outstanding results.

The most notable features of the drone are its mobility, as it was mentioned in the beginning of this article, the speed of 50 km/h is pretty impressive for a drone. The drone also has a insignificant weight of only half a kilogram. Although this might sound like the drone is quite fragile the truth is quite the opposite.

The drone has a microSD memory card on which all flight data is stored. This can later be used as a way to improve the skills of piloting or even to discover the cause of a problem. The Sony QX100 camera can also be switched if you need a better one. Still Sony QX100 is a very capable camera, nobody will judge if you decide to keep using it.

The camera itself is known for the quality of its 20 mega pixels photos and Carl Zeiss optics. Sony QX100 can record videos in an 1980h1080 video resolution at 30 / sec. Moreover, the bitrate of the obtained video is within 15 – 17 Mbit / s, and the AAC LC codec bit rate Sound stereo audio at 128 kbit / s. Draganflyer X6 is equipped with cardan suspension which has the role to stabilize the camera.

Many people might get confused by the terms of “quadcopter” and “drone”, although there are some differences between them, they are basically the same. With a slight mention that the drones are most of the time bigger and are mostly used by the military.Also, the quadcopter is smaller in size, and has 4 rotors (quad) and is mostly used for photography and recording purposes. Now that we clarified this let’s proceed with our Draganflyer X6 specifications:

In conclusion, Draganflyer X6 is the perfect drone for those who can afford spending 8-9000 dollars. Although many people can consider the Draganflyer X6 as an expensive acquisition it is important to keep in mind that it comes flight ready. Therefore, many of the drones on the market require additional parts to be bought in order for them to function properly. This can double the respective drone price, so keep this in mind before deciding what to buy.

The only problems Draganflyer X6 has are the relatively small batteries capacity and the cardan suspension that stabilizes only one corner which is outdated for our times. All in all, these problems can be easily solved, meaning that Draganflyer X6 is one of the best drones that you can find on Amazon.