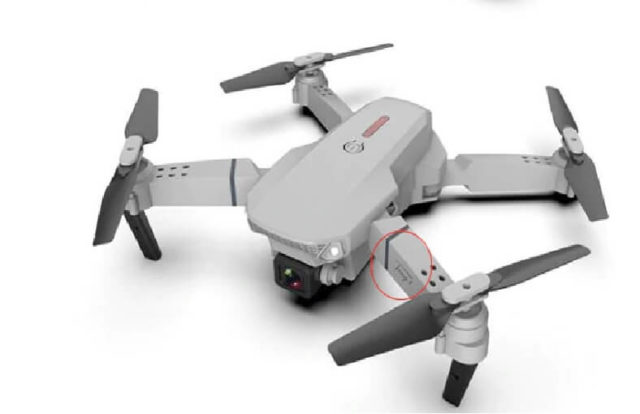 An interesting fact these days is the way that movies and videos are made using new methods and gadgets besides the usual filming devices like cameras. Drone is a device that can not be missed from a film set because not only completes the filming but also makes an overview of the environment where the video is shot and also can take incredible views from the height the drone can achieve.

The Wolf of Wall Street, Spectre and Captain America are just a few movies that have scenes where the drone does its job but the truth is the latest movies on the market have at least one scene filmed with a drone.

With the technology advance we can provide a great clarity of the images putting emphasis on high quality because there were released new models of drones with 4k. One of them is the E88 TENG1 that triggers people’s interest for its price, features and more. Let’s take an overview about the product and see what it offers.

Firstly, the 88 TENG1 Quadcopter measures 12.5 x 8.1×5.3cm and weighs no more than 104 grams with the battery loaded. Because of its low weight, it cannot cause serious damages if something is hit by accident. This model follows the design of the most iconic DJI Mavic.  In front, it has two LED lights that help in orientation during night flights. There is also a second LED you can find on the back of the drone right above the battery bay.

The frontal camera is installed on a fake gimbal and does not provide stabilization or remote angle adjustment. The camera module can be removed or replaced If you want. The battery is loaded from the tail of the drone which is Similar to Mavic Mini.The included blade guards can be easily installed or even removed without any tool.

There are the most important features:

The E88’s camera doesn’t have UHD video quality. The truth is that it can take 4096×2160 (4K) photos but videos are captured with only 1920×1080/20fps. If i were to say both have poor quality, especially indoors and in low light conditions. The camera has natively only VGA resolution and it is upscaled for marketing purposes. Without any onboard recording, the footage is captured from the live video feed and stored on your phone’s memory. You can view the camera’s video feed on your phone by using WiFi_Cam APP . The APP makes switching between front and abdominal cameras and digital zooming possible.

The transmitter is composed of two fake foldable antennas and a retractable phone holder. Besides the usual control sticks and power switch, there are 8 buttons you can find on the front panel.

From left to right you have the following: Photo/Video, RTH/Headless mode, Take-off, Land, Right, Left, Forward, and Backward fine trimming.

Based on the advertised spec, the control distance is about 100 meters. In the name of being honest the WIFI FPV range is even shorter. Anyway, I would advise you to not fly for a long distance with such a toy-grade drone. If you don’t positionate GPS, its return to home (RTH) feature is just guessing the way back to home (take-off point).

This is one of the most important features that we are looking for when we decide to buy a drone. So the 88 TENG1 Quadcopter is powered by a single cell (3.7V) with 1800mAh modular battery. Based on the size of the LIPO cell, the real capacity of the battery is around 800-1200mAh. The pack has a micro USB port for charging and status indicator LED (red – charging, green – fully charged). Each fully charged battery allows around 7-12 minutes of playtime. Battery life depends on flight speed, flight style, and also wind conditions.

When it comes to the flying part, all you have to do is to unfold the arms and power it ON. You can take-off automatically by using the dedicated button or manually using the throttle stick. You can arm the motors easily by moving both sticks to the outer-down position. At the highest speed rate, the drone is quite fast and agile.

It has built-in 360° roll/flip features. After you press the left shoulder button, the E58 makes a flip in the direction you move the left stick. When the battery is near empty, the drone will slowly come down and land on the location at that time.

Were I to mention some of the reasons why I would buy TENG 1 E88 would be:

Also the reasons why I would think twice before buying one would be:

In conclusion, before buying one please take into consideration that there are 3 camera options. So E88 can be bought from AliExpress with a price between US $33.99 and 41.60 depending on which camera you choose . You can find all 3 versions in two colors (black and grey) and with 1, 2, or even 3 flight batteries.

I strongly recommend  88 TENG1 Quadcopter for those who take their first steps into this world, or for those who are amateurs and want to learn. It is a low budget but a decent product that gets its job done. The features are good enough to help you improve your filming skills and develop your attitude when it comes to controlling the drone. Also for those who want some better quality and want to use it for different purposes such as: movies, short film, wedding videos, and so on.