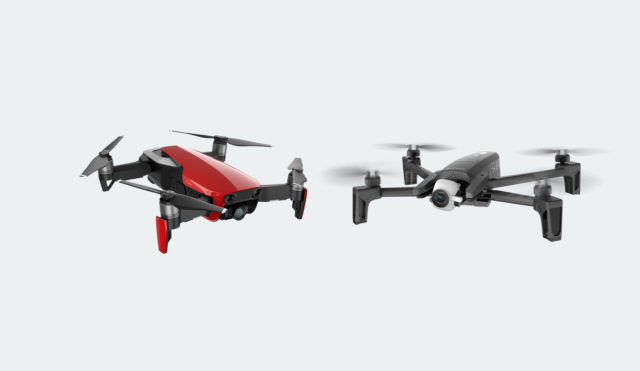 The new Parrot Anafi has made his entrance in this year in early summer. The big question is that can be a competitor for the DJI drones? DJI Mavic Pro 2 vs Parrot Anafi? This is an unrealistic comparison between these two machines, but Parrot has some unique features that the double priced Mavic 2 Pro has not. Parrot, the French drone manufacturer company has been on the market for some years, but other than beginner drones they did not make any professional photography drone.

Well, Parrot Anafi exceeded our expectations in spite of the fact that has great minuses too. Overall looking it can be a great alternative, for those creative professional, video or photographers, who want a reliable drone at half a price than the DJI Mavic 2 Pro. Let’s see in comparison the two quadcopters to find out what are the big pluses and minuses between those two.

They have different folding mechanisms. Parrot’s arms are folding in line with the body, and the Mavic/s arms just underneath the body. Parrot Anafi has a shape more like a bottle, so it cannot fit easily in a pocket unlike the Mavic 2 Pro.

The controller of the Parrot Anafi is larger than the Mavic 2 Pro, it is not so portable. Mavic 2 Pro has a unique controller design with foldable handles and, removable joysticks which increases the portability standards.

Talking about the appearance of both drones, you will notice the greatest difference at first sight. Parrot Anafi has a unique camera system. It has a tiltable gimbal that can tilt in 90 degrees upward and downward. So you will have a 180-degree view. This is the greatest selling point of the Parrot Anafi. The DJI drones don’t have 180-degree view cameras or any other drones on the market. It was a white spot that Parrot has greatly filled.

With Parrot Anafi, you can have great sky perspectives when filming, or you can use the upward facing camera to shot video footages at a low-level flight, under bridge views or other creative perspectives. More details about the camera specifications later.

Parrot Anafi comes with a USB C port to charge up the battery, which is a really useful feature. You can plug into a power bank when you are between locations, so you won’t have to use an extra battery for new flights. Mavic 2 Pro uses the USB C port only for data transfer than charging up the battery.

Mavic 2 Pro has an advanced APAS 2.0 six-directional obstacle avoidance system which essentially makes impossible to crash the drone into trees or any other obstacles. It works amazingly perfect. Parrot Anafi lacks any kind of obstacle avoidance system. This is a great minus when you think about safety. Parrot Anafi is definitely more for advanced pilots than newbies. The only sensors that Parrot Anafi has the GPS/GLONASS sensors, and some altimeter sensor.

In sports mode both drones are agile. The Mavic 2 Pro can fly at 72 kph, the Parrot Anafi only with 55km/h. Bear in mind that in filming you won’t use such high speeds, the two drones are very similar in this case.

The control range of both drones is immersive. The Mavic 2 Pro has 8 km of remote control, the Parrot Anafi only half of that, but it is still an impressive feature. Another characteristic of the Mavic 2 Pro that it has an 8-gigabyte of internal storage, unlike the Parrot Anafi that lacks this feature. It only has an SD card slot underneath the battery, but it comes with a 16-gigabyte card, so it is not a big deal.

Mavic 2 Pro has undoubtedly a superior camera than the Parrot Anafi owns. It has a 1-inch sensor with 20MP resolution, developed in partnership with the Swiss photography brand Hasselblad. Parrot Anafi has a 1/2.4 inch 21MP CMOS Sony Sensor, which is less than the Mavic has but still takes pretty amazing shots. The ISO range goes up to 12800 in the case of Mavic 2 Pro. Parrot Anafi just takes up only to 3200.

Both cameras are able of filming 4K video footages. The Parrot Anafi in 4k films at 24fps, the Mavic 2 Pro with the advanced H.265 video compression is able to record at higher 30 frames per second rate. Surely the Mavic 2 Pro camera has more detail, more dynamic range and performs much better at low light conditions too. Both drones are capable of HDR videos too.

This DJI Mavic Pro 2 vs Parrot Anafi comparsion illustrates the fact that the two drones don’t play in the same league. The price tag of the two is so different. The Mavic 2 Pro is more than double the price of the Parrot Anafi. A closer competitor for the Parrot Anafi it would be the DJI Mavic Air. Although Parrot Anafi is a great quadcopter, for those who like to film in a creative manner. The 180-degree tiltable gimbal is a deal breaker if you want to make interesting video footages with unexpected angles. It is unique on the market and only that feature can attract a lot of customers to Parrot. If you have a wider budget you definitely go with the Mavic 2 Pro because it is the best done on the market now.