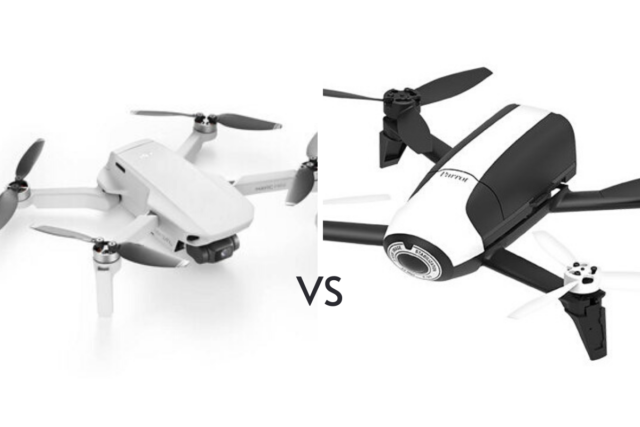 As you saw you saw in the title today you will see 2 of the greatest drones head to head: the DJI Mavic Mini and the Parrot Bebop 2. These are both awesome drones but they are different categories and they are different in many aspects. You will the drone analyzed by 3 main categories: Design and build, Camera and Flight Performance. If you’re interested in the DJI Mavic Mini vs Parrot Bebop 2 stick with us.

The Mavic Mini has a gray and dark gray color scheme, and its front is adorned with a pair of ‘eyes’. But overall it has a new, clean and stylish look, probably it’s one of the better-looking drones we’ve seen.

As for the technical parts on the front of the Mavic Mini has the 3-axis gimbal that holds the camera. When you take it out of the box, you will find that it has a  shield on the camera which is removable when you come to fly it. When you look on the back there is an exposed microSD card slot and the micro USB port for charging. You will have to be careful not to let any dust or water in these ports.

The Mavic Mini is a suitable drone for transportation, it has a foldable design and it weighs only 250g. Therefore the Mini can avoid the need to be registered in FAA in most of the countries (but do check your local laws). This weight is divided by the following specs: 150g the body, and 100g the battery. However it’s not made from cheap materials, it’s very reliable and durable. Just look at how many YouTubers use this drone, if it wasn’t so good they wouldn’t use it.

However it has a bad part as well, there are no obstacle avoidance sensors on its sides, front or back, as on other DJI products like on the Mavic Air. The only sensors it has been placed on the base to enable smooth landings, along with a battery meter If you’re a beginner, anticipate flying indoors or choose the Fly More bundle to get the 360-degree propellor guard.

If you’re in the drone game for some time you can assume that the Bebop 2 is a modest upgrade over the original Bebop. However don’t think that Parrot has been that lazy, the Bebop 2 boasts a more robust design and a larger-capacity battery, addressing two main problems with the first Bebop.

The body frame is now almost entirely plastic, and some deformable polystyrene-type material around the camera. Each moto has three blades, and these can be removed when the drone isn’t in use.

The Parrot’s device has a pretty unique but useful build because it’s not a single solid unit, but two main elements which are connected via a series of shock-absorbing rubber balls. This was the purpose to reduce the impact of vibration on the camera itself.

The rotors which are made from plastic are removable and have to be fitted to the drone itself using a special tool. The rotors are color-coded ( white on the front, black on the back) so there is less chance that you install them wrong. You will find a spare set of rotors in the box, and there’s even a possibility to order replacements if they get damaged.

The motors on the Bebop 2 are powerful ones, it can hold the drone even in unlikely weather, but it’s advised not to fly it in rain. The Take-off and landing operations are easy, and the unit has a module to know when there’s an issue that could cause problems to the system. Like if you try to take off in long grass that catches one of the rotors, the motors will turn off and you’ll get an error message until you move the drone to clear space. The Bebop 2’s motors are also really responsive when airborne, and are capable of some surprisingly swift turns.

The DJI Mavic Mini has an amazing camera, being able to shoot 2.7K video at 30fps or in 1080p at 60fps. Also, the camera is built with a 1/2.3-inch sensor which can take really good photos with his 12MP. IF you need a little help you will find some useful modes on the drone, like Position, Sports, and CineSmooth mode,  All modes deliver stable footage, however, in some cases, there is a small vibration when changing direction while shooting in sports mode.

There isn’t a huge amount of capacity to pull detail out of highlights on bright days, so the Mavic Mini isn’t going to be a pro filmmaker’s dream drone. Thankfully you have the possibility to take control over photos with manual mode. In manual mode, you have the option to use shutter speeds as long as four seconds, and up to ISO3200 so you will be able to capture usable photos even in darker environments.

One of the best parts of this drone is the new DJI Fly app, which allows a simplified flight experience for all users. The app contains complete guides and videos that are in great usage for beginners. This app also features multi-track video editing, which gives you convenient templates and extra editing functionality. So you as soon as you recorded your videos you can edit them and post it on social media with the DJI app in no time.

The camera that you can find on the Bebop 2 has a remarkably wide field of view that, also allows you to tilt and pan the camera angle electronically as if it were on a mechanical gimbal. Beside the 3-axis gimbal it has an electronic image stabilization which is among the best on the market. But not just the stabilization is good on the drone but it has one of the best image quality in his price range. The HD videos are solid, but limited to 720 resolution.

Mavic Mini has three main modes that you can capture videos: Position, Sport, and CineSmooth. All of these can be accessed in the DJI Fly app. The position is the default mode, which utilizes GPS, but you can fly the drone on an inferior speed. In Sport mode, you fly the drone faster, but it will be harder to control, and to make stable footages, so don’t start with this. And finally in CineSmooth mode is the slowest mode which will allow you to create the perfect video or image.

In his standard build, the Parrot Bebop 2 is controlled via the FreeFlight Pro smartphone app, available for both iOS and Android. If you’re feeling creative then you can create a flight plan for the drone to follow, but unfortunately, both this and the ‘follow me’ functionality are in-app purchases and you will have to buy them.

The app is able for 2.4GHz and 5GHz wireless signals to ensure the drone has the best connection. The flight range from the phone is only 300 meters, but at least you will always have visual contact with your drone.

As you can see from our DJI Mavic Mini vs Parrot Bebop 2 comparison, the Parrot is inferior in many aspects, but the good news is that you can get it for a way lower price. So the real question in this article isn’t which is the better drone but which one fits you the most. Because if you’re a beginner in drone stuff then maybe you don’t need such a good drone as the DJI Mavic Mini. But if you think that you could profit from such a good drone then go for it. You can buy the DJI Mavic Mini from the DJI Official Store and Amazon, and the Parrot Bebop 2 from Amazon.