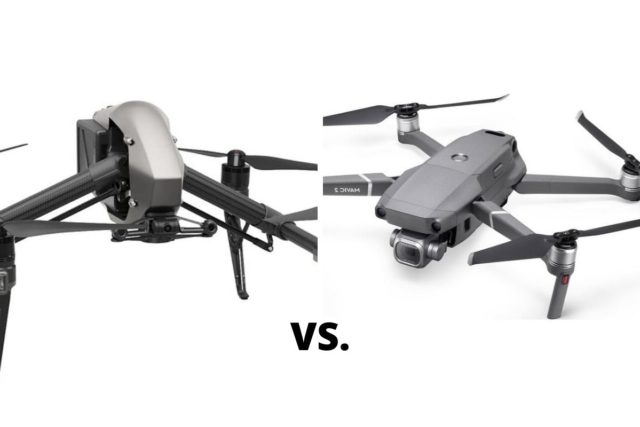 In the industry of drones a lot of changes have been made these recent years. The era of drones has blossomed and many kinds of drones are available. Some cool models launched by DJI are the Mavic 2 Pro and the Inspire 2. Let’s see who will win the DJI Inspire 2 VS. Mavic 2 Pro match.

The drones are quite distinct and made for different purposes. Inspire 2`s target is the prosumer segment, while the target of Mavic 2 Pro is the consumer or enthusiast side. The Inspire cost more, but it is a quality and ultra-performant drone. However, the Mavic is much more affordable and can capture cinematic footage with its Hasselblad camera.

The Inspire 2 is a big, heavy drone and at first looks is kind of intimidating. It is made of good quality carbon fiber and some slick metal. The cherry on the top of this drone is the Zenmuse X7, its detachable camera system.

Having a 2-axis stabilized FPV camera with an independently adjustable pitch gives the pilot a personal live feed freeing the camera op to move any way they need to get the shoot.

This drone turned many people into aerial filmmakers and appears on professional film sets around the world. It empowers filmmakers to be more creative whether working in a team or as a single pilot.

It can fly up to 23 min and during this time you have the opportunity to capture some really cinematic footage. The speed does not come without protection, because of the FlightAutonomy system that gives an extended range of 100ft.

On top of the Inspire 2 is placed an Infrared Sensing system that contributes to avoiding obstacles. The new dual battery design increases flight time hitting a maximum of 27 minutes when using the X4S camera and also provides battery redundancy. Self heating systems mean the inspire 2 can be flown in extreme cold.

The Inspire has 2 intelligent modes including Spotlight Pro and Profile that help to do cinematic shots easier for production teams and even for single users. Spotlight Pro keeps the camera locked on the subject rotating beyond 360 degrees to fix a target in the frame as Inspire flies. While Profile mode turns the camera to capture the subject`s profile as the drone flies forward. By maintaining forward flight, obstacle sensing systems can protect the aircraft.

Separating the flight view from the main camera view can be done with the onboard FPV camera, which effectively gives the Inspire 2 a dedicated TapFly camera. Just step on the screen to fly in that direction and focus on camera control. During a return to home the primary camera with a maximum sensing range of 200m is used to effectively avoid obstructions.

Mavic supports a 10-bit Dlog-M color profile that yields a higher dynamic range for more flexibility in the grading room. It records 4 K video with an advanced H.265 compression so your images retain even more detail.

You can go anywhere, anytime with Mavic 2 because of its foldable design. It is a small drone but a top speed one, and both ascent and descent can be accelerated.

For nicer dynamic range and image clarity Mavic 2 Pro also supports Enhanced HDR photo, which is an upgraded technique that combines a sequence of photos.

You can edit Full Hd footage directly from your own mobile device with the help of the OcuSync 2.0 that provides a 1080p transmission signal up to 8 kilometers. The 2.4 to 4.8 GHz auto switching offers better performance in environments with busy signal interference.

Mavic 2 has obstacle sensors on all sides. The aircraft analyses every inch of its surroundings to move around obstacles without stopping so you can focus on capturing the perfect shot. Its digital nervous system continually transmits data to a new, more powerful central processor.

Helped by its vision systems, the drone maps a 3D view of the environment for better accuracy and also tracking. Trajectory prediction algorithms also help to maintain a course when your subject is blocked by an obstacle.

As you may know the quality of DJI drones is outstanding. The materials used are great ones and the products are without rough edges. But this round is won by Inspire 2 because of the carbon fiber reinforcements that are added to it and the superior look and texture of the materials. Do not think that Mavic 2 Pro is not good, but it feels more plasticky and belongs to other categories.

When flying, the Inspire 2 is quick and fast with a top speed of 50 mph and over, just a few more miles per hour than the Mavic 2 Pro. Instead, the Mavic 2 Pro has better agility because it is smaller and does not weigh that much so this allows it to respond quickly.

After you purchased them, the Mavic can be used in a few seconds, while the Inspire needs a basic setup that will take some time.

When purchasing a drone, most people look at the quality of the camera. That is the most important thing because it is the main reason, in many cases, to buy a drone.

DJI has made a great move and bought Hasselblad, a famous and well-known name with a great history in the field of photography. The first to benefit from this is Mavic 2 Pro, having a Hasselblad camera which whom you can shoot 4 K in 24p and 30p.

The picture quality is also better at the Inspire 2, the interchangeable lenses making a big difference. Due to the great quality of the camera, the image has an amazing depth and a more cinematic look. The Mavic 2 Pro is great too, but when you look at the shoots standing next to each other it will be obvious that Mavic lacks depth in the image.

A weak point for drones is usually the low light performance. You need to be very skilled to take a cinematic shot with a drone while it is night time and it requires adding some plus time correcting the color and reducing the noise.

With the Mavic it is not quite easy to take a cinematic shot, and both drones experience the presence of the noise in the image. But the image looks nicer and brighter when you use the Inspire 2.

The DJI Inspire 2 Vs Mavic 2 Pro comparison is done so, which is the better deal? It depends mostly on you and for what will you use the drone. If you are more implicated in the aerial video shots then better go for Inspire 2 and choose the Mavic 2 Pro if you want to take benefit of the occasional aerial shot.