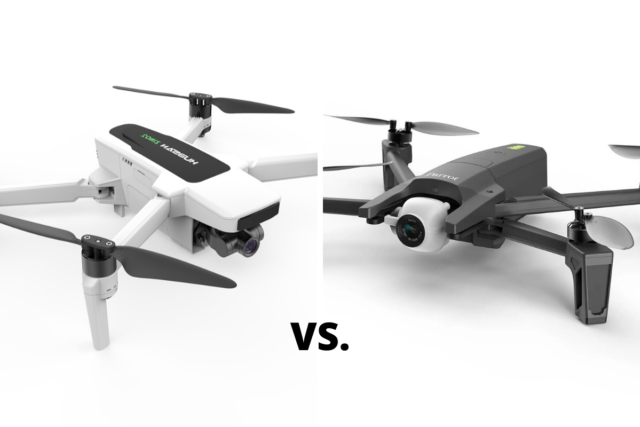 In this article, you will see a head to head comparison between two of the most popular drones in the 21st century, Zino 2 vs Parrot Anafi. These are some really good drones for the price you can get them. We will review aspects like design, camera, remote controller, and flight experience, the most important things about a drone.

Drone veterans may observe that the Hubsan Zino 2 looks pretty much like his older brother the Hubsan Zino. However, there are still some differences inside and outside between the two brothers. The Zino 2 measures 32.6 x 26 x 9.49 mm and weighs almost 1Kg (915 grams). It was built with a minimalist and compact design and everything you might need on a drone. The drone has a foldable design which is useful in case you want to transport somewhere the drone. You can easily put it in your backpack, without taking up to much space. The drone comes in white color, and it’s built from high-quality polycarbonate so it can survive minor crashes.

On the other hand, the Parrot Anafi looks like a dragonfly from above. It weighs 320 grams so it weighs less than Zino 2, and you don’t need an FAA registration. This is due to the fact that it was built out of light materials. The heaviest part of the drone is the battery, which needs to be quite big for decent flight time. One bad thing about the drone is that it has a lot of open areas so you have to be extra careful where and when you fly the drone. So make sure no dust or water enters under the case because it might cause some serious problems to your drone.

This is an important part of a drone because if your controller sucks you might not be able to perform that well in the air. The controller of the Zino 2 comes with an integrated LCD monitor, on which you can see a lot of useful flight data like flight time, flight distance, battery level, GPS data, etc. Also, the range of the controller is extended toward the previous generation, so now you have an 8Km flight distance from the controller. The Joysticks is really accurate and responds well to the commands. Besides the LCD screen, you will have a phone holder as well. However, the controller doesn’t connect to the drone via WiFi or Bluetooth, you will have to connect your phone to the controller via a cable. You have the option to connect your phone via a micro USB or a Type C because you’ll get both in the package.

The Parrot Anafi’s controller is also a compact one. The max range between the controller and the drone is 4Km (2.5miles), told by the manufacturer. Overly It is a well designed, and though, little controller. It fits nicely in your hand and can offer a lot of controls. You will have shoulder buttons and levers to control the video, and you’ll be able to also control the gimbal angle and digital zoom features. The phone holder flips up from the body, so the controller is a foldable one as well, and it can support big phones as well. This controller as well connects to the phone with a USB cable, but only a USB Type-C cable is included.

Now, this is the most important part of a camera drone, the camera itself. The Hubsan Zino 2, comes with an incredibly good 4K camera that can record in 60 fps (max). This will give you a detailed and smooth video. The camera is supported by a 3 axis gimbal. With a suspension like this, you will get as clear images and videos even if the drone has some problems staying in one place. A 3 axis gimbal can provide you really good and stable videos. But if this won’t be enough, there’s an onboard chipset which helps the Zino 2 shoot great footage in dark, so you may take photos even in the night time.

As for the Parrot Anafi drone, it also has a 4K camera so he can make exceptional footage, and has some cool camera-related features as well which will help you create amazing footage. The camera is also supported by a 3-axis gimbal, so the footage it’s protected from any turbulence. Unfortunately, it doesn’t have any obstacle avoidance so you always should have visual contact with the drone. The drone has some video modes like Standard, Cinema, Hyperlapse, Slow motion, High frame rate. Each of them can create cool cinematic footage in his own way. The footage can be stored on an SD card.

The Zino 2’s battery will get you over half an hour of flying time, and because its batteries are detachable you could choose to have multiple ready for quick swaps. When it is up in the air you’ve got a signal range of a huge 8km, as we told you before. Meaning that you can make footage over a huge area. Just pay attention not to lose the drone. The drone can achieve a speed of 72km/h making the Zino 2 a really fast drone. This is achievable because of the lightweight. It has the basic flight options, like the altitude hold and some of the most used camera-related features

The Parrot Anafi’s propellers handle really well the weight of the drone, the motors work really powerful. It has 2 main flight modes: the film mode and the sport mode. In the film mode, it’s a bit lower, but at least you can make smooth footage. In the sport mode, you can achieve the max speed of the drone. You can adjust these specs in the app, you can select your optimal vertical speed, rotation speed, camera tilt speed, etc so the drone will be exactly on your taste. As for the intelligent flight modes it has some like:: Manual flight, Cameraman, SmartDrones, Touch & Fly, follow me, Flight Plan (however, for the last two you will have to pay).

If you enjoyed this Zino 2 vs Parrot Anafi comparison, you can buy the Zino 2 from Hubsanus, Gearbest, and Geekbuying, and the Parrot Anafi from Amazon.