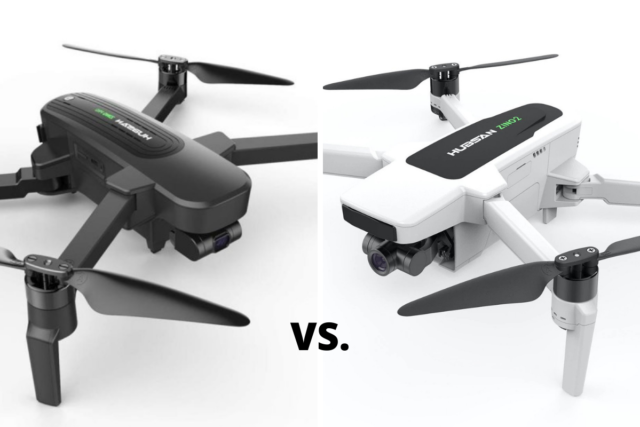 The Hubsan Zino made some great drones recently. In fact, they are so great that it became a serious problem to chose between their drones. All their creations can keep up with high-end drones from DJI. But today we won’t compare them to other drones, but to each other. In this Zino Pro vs Zino 2 article, we will decide which one Hubsan is better and has a better value for your money. First of all, I have to say that both of these drones are some aesthetically pleasing items, with some great hardware and features inside.

The Hubsan Zino drones always had very nice designs, and this is true for both of the drones here. They kinda look similar regarding their build. They both have a longer base with a foldable arm in an X shape, but they have different colouring. The Pro comes in all black, while the 2 is grey with some black details.

The Hubsan Zino Pro measures only 30.4×25.24×9 cm when it is unfolded and weighs around 700g, so it’s not that big of a drone. Which is good because this way it’s easier to transport it to your next trip. Just like any other drone, this one was made out of high-grade ABS plastic which keeps the drone durable and light at the same time. Also, it gives the drone a high-end feeling. The drone was designed powerful brushless motors that provide stability, better control and a fast flight. Due to the motor and the weight, the drone can fly with a maximum speed of 36 km/h.

The Zino 2 measures 32.6 x 26 x 9.49 cm and weighs almost 1Kg (915 grams) so it’s a bit bigger than the pro. Which isn’t a big problem because it has a bigger battery and a stronger motor so it can keep up with the features of Zino Pro, in fact, it can perform even better in some situation. It also has a minimalist design and it’s foldable just like the Pro.

The controller of the Pro is foldable (at least the phone holder) just like the drone, which will make it easier to transport and to attach your phone when it’s needed. One of the best parts about the controller is the fact that it has its own battery, which can help you a lot because you don’t have to mess with cell batteries. And now the range, this drone has an immense range of 4KM, this can compete with evert high-end drone. When you fly it at great distances make sure it has plenty of battery left, but the best is to always keep an eye on the drone and never fly it too far.

The controller of the Hubsan Zino 2 is somehow more complex, and a bit better. The design’s almost the same, but this controller has an integrated LCD screen, which shows you a lot of useful flight data like distance, battery level, and GPS data. The other better thing about this controller is the increased range, which is 8K. A distance like this can be great but it’s also dangerous. The joysticks and buttons are accurate on both of the controllers.

The drone has an FPV feature, for that, you’ll have to connect your phone to the controller via a cable. This can be through a micro-USB or a Type-C one, both of them are included in the package.

The battery for the Zino Pro is a 3S 3000mAh battery that is easy to remove. This battery will give the drone an approximate flight time of 23 minutes, give or take. Usually, it takes 180 minutes to fully charge the battery. If this time is not enough for you you can get some spare batteries.

The battery for this drone is quite bigger, is a 4s 3800mAh one. This will provide 33 minutes of flight time for the Zino 2, which is 10 minutes more than the Pro. The flight time can be influenced by a lot of things, like the temperature outside, your flight time, etc. So don’t be surprised if somehow the drone will fly 5 minutes less.

The best this camera can do is 4K at 30 FPS. But to be honest, it’s harder to work with 4K, it has a better image, but most of the devices can’t play the 4K properly. So it would recommend you to record only at 1080p where the camera can record at 60 Fps, so you’ll get a smoother image. The FPV image transmitted to the phone is also sent in 1080p max. The camera is supported by a 3-axis gimbal which will stabilize most of the distortion and jello effect from your videos. The camera has a wide-angle, fish-eye effect lens which is understandable for a dynamic camera.

The camera on the Zino 2 can record in 4K at 60 FPS, so it will provide a smoother 4K video, but you can reduce the quality to 1080p, which will take up less space. This camera is also supported by a 3 axis gimbal. Also, in the case of Zino 2, there is built-in software that will also help you stabilize the image.

As you saw, both of the drones can perform really well, but without a doubt between the Hubsan Zino Pro and 2, the last one is the superior one. It has a flight time more than half an hour, can recor videos in 4K at 60 FPS, and has an incredible range of 8Km. The Pro can preform well, but the 2 is somehow better. And of course it has a higher price as well. But if you want to make the best out of your aerial footages, the 2 is the drone you should go with.

If you wish to buy the Hubsan Zino Pro you can do it on Amazon or Banggood.

The Zino 2 can be purchased from Amazon, Banggood, and Geekbuying.