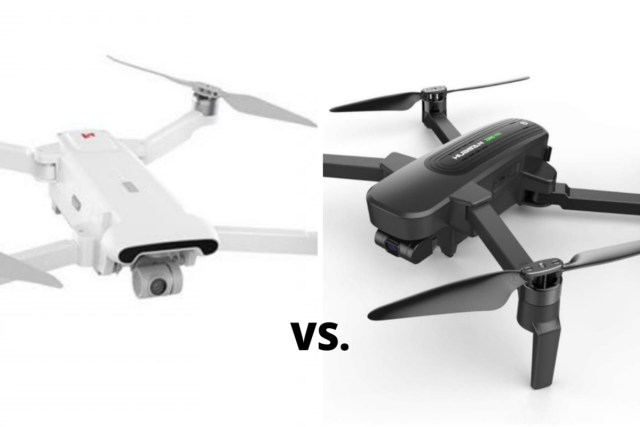 Xiaomi and Hubsan are not the most well-known brands in the drone industry. However, they can compete with the best in the drone game. So if you don’t want to spend a fortune on a DJI drone, they are the way to go. Both of these drones have their pros and cons, and in this Xiaomi Fimi X8 SE vs Hubsan Zino Pro article, we will analyze them to give you an overview of which drone fits you the most.

We will compare the specs, features, design, parts, and the most important, the camera. But we can say in advance that both of the drones are on the brands best quadcopters. They are not the most beginner-friendly ones, but they are quite easy to learn. Also, they have some independent flight modes, which will make the recording process easier. Also, due to their high-quality camera, you will be able to make some really stunning footage.

Both of the drones are well-designed, they are made in a minimalist style that is liked by almost everyone. The Xiaomi Fimi X8 comes in white colour, with some black details on the front and a brand sing on the top. Also, both of them are foldable drones, which makes them compact and easy to travel with. The drone measures just 73x106x204 mm when you fold it and weighs somewhere less than 800g. The camera is placed on the front and its held by the three-axis mechanical gimbal. The minimalist design is completed with some LED lights which are placed under each arm.

The Hubsan Zino Pro was also created with a minimalist design in mind. Just like the Fimi X8, this one is made with ABS plastic, which makes them durable and lightweight at the same time.  The quadcopter measures only 304×252×90 mm when it is unfolded and weighs around 700g. So it will be easy to travel with this drone as well. One thing is sure, compatibility is not a problem in the case of any of these drones. This drone also has LED lights under its arms, but instead of white, this one comes in black colour.

The Xiaomi Fimi X8’s controller looks like a Nintendo Switch. On the sides, there are the buttons, and in the middle you can place your phone which the screen for the Controller wich gives you the FPV as well. I have to say that this is a very practical solution which makes the whole controller a single piece. Unfortunately, this prevents the controller from being foldable, but at I prefer this method. The controller is quite big, but you will get used to it fast.

Don’t worry, because all the controls are easy to reach. And the best part is the huge transmission range which is about 5KM. This is a huge distance, but you should always be carrefour not to lose your drone or to crash it into something. The controls on the remote makes you able to acces features like take-off, landing, recording, hedless mode with pressing a single button.

The FPV view is available only if you connect the controller to your phone. The connection is made throug a cable, so it’s not an unstable wireless connection. There some intelligent flight modes like orbit mode or follow me which can be accessed only throu your phone. But for that you’ll have to download the app.

The battery for the Xiaomi Fimi X8 is a 4500mAh one, which gives the drone enough power to fly for 33 minutes, give or take.

On the other hand, the controller of the Pro is a foldable. But that doesn’t give him much advantage, because only the phone holder part is foldable. In this case the phone can be attached on the bottom of the controller, under the buttons. There are some people who prefers this way, instead of the previous solution. Whichever will be the most practical, this technology will make this controller a bit smaller than the previous one, dus it’s easier to transport.

The controller has its own battery, which is a really cool and practical thing because you don’t have to mess with cell batteries, just mae sure it’s charged all the time. And now the range, which is the most important part of the controller. Unfortunately, this this drone has a bit smaller range, only 4KM. But comparing to other drones this a pretty good number.

With this drone you get a 3000mAh which is slightly smaller that the one from Fimi X8, but the drone itself is smaller as well, so it’s not a problem. This battery will provide enough pover for 23 minutes of flight time. The charging time for the battery is 180 minutes. Is the fligh time for any of these drones is not enough for you, you can always get some spare batteries to multiply the flight times.

The drone is built with an awesome 4K camera. The most you can do with this camera is a 4K recording at 30FPS. But is you reduce the resolution you may get a superior FPS which results in a better quality. The camera is stabilised by a 3 axis gimbal which will eliminate any kind of distortion resulting in still, ultra-smooth images and videos even in windy conditions. The gimbal can be adjusted freom the controller in 90 degrees.

The camera on the Hubsan Zino Pro can also do 4K at 30 FPV. So there is not much difference between the two in the camera section. In fact, this is the only part of the two drones that have the most similarities. This camera is also supported by a 3-axis gimbal which can be adjusted. The lens on a camer gives the footage a wide-angle, fish-eye effect lens which is understandable for a dynamic camera.

Both of the drones are really cool, and their specs are really close to each other. However, the Xiaomi Fimi X8 seems slightly better with its extended flight range and superior flight time. But the Zino Pro is just as well a really good drone that will provide you a lot of good aerial footage.

You can buy the Fimi X8 SE from  Amazon, Banggood and Geekbuying

The Hubsan Zino Pro is available on Amazon and Banggood.