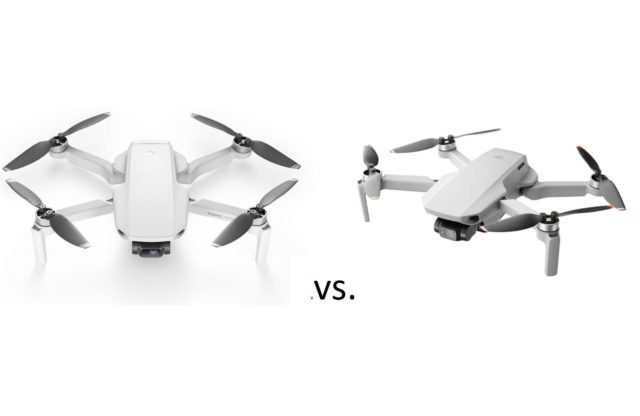 In today’s article, we are going to compare two amazing small drones that succeeded to impress their audience from the first moment they arrived on the market, DJI Mini 2 vs. DJI Mavic Mini. The DJI Mavic Mini 2 is the upgraded version of the DJI Mavic Mini, which came out 12 months after. So following this article you get the chance to see what extra features the DJI Mini 2 has to offer comparing it to its previous model, the DJI Mavic Mini.

When the DJI Mavic Mini first came out on the market, the main thing that made it so popular among its users was its small and compact size. Being a small sized drone, it also has a lightweight, under 250 grams, making it eligible to fly without having to get a license for it. The drone has a very beautiful design and due to its white color it also gets a very professional look.

The DJI Mavic Mini 2 comes with an identical design, being made out of the same high quality ABS plastic, which offers it a great resistance to small accidents or shocks. When it comes to its inside components, the Mavic Mini 2 comes with some interesting improvements that will help get an even better professional experience at a friendly-budget.

An important drawback for the Mavic Mini was that it could not record videos in 4K. The maximum resolution you could get out of it was 2.7K which is not bad at all, but still many of its users were expecting a great 4K camera on their DJI. Luckily, the new DJI Mavic Mini 2 comes with a great updated camera which can record impressive 4K videos at 30 frames per second and amazing photos at 12 mpx.

More than that, the Mini 2’s upgraded camera has a really impressive 4x digital zoom, that you can use while shooting in 1080p. As we can see, an improvement of its camera was necessary taking into consideration the big demand of users who are searching for drones that offer high quality video and photo footage.

Remote controller represents another important aspect when you are thinking about purchasing a drone. Even though the Mini’s controller has an impressive look , being very small and easy to handle, the Mavic Mini 2’s controller is a little bigger, which makes it easier to hold in your hands. It has a lightweight and as the other DJI’s controllers the Mini 2’s controller is very easy to use. Comparing it with the first generation’s controller, this one has a longer battery life and the clamps which help you attach your smartphone to it are on top, making the user experience way better.

Every drone enthusiast knows that when it comes to the drone’s flight time, the more it can stay up the better. Because of that the new Mavic Mini 2 will offer you an amazing flight time of around 31 minutes, which is a really impressive progress, comparing it with its previous version which can offer a maximum flight time of around 24 minutes. Having this important factor in mind, flying the Mini 2 quadcopter you can be sure that it will offer you plenty of time to find the perfect angle for your footage without worrying about its battery.

When it comes to its Flight performance we can see some good improvements here as well. The Mini 2 comes with upgraded brushless motors which will offer it a much faster speed, around 58 km/h compared to the Mini which had a maximum speed of around 47 Km/h. and because of its upgraded motors the drone not only can fly faster but it is also more efficient offering a longer flight time at a higher speed, so you can create impressive dynamic videos flying this drone.

If somehow you worry about being a small drone it will be hard for you to fly it in windy conditions. There is no reason for it, because the Mavic Mini 2 comes with an increased wind resistance up to 38 km/h making it  almost as resistant as its bigger brother, the Mavic Air 2. By knowing that you can be sure that your drone will be protected and safe even in the bad weather conditions that may occur.

This drone not only comes with more improved components, but its software also suffered some big and important improvements which makes the Mavic Mini 2 smarter, easier to fly and more useful in capturing really amazing videos and photos.

Is a great Shot mode that you can find on the Mini 2 drone which makes the drone create an impressive video acting like a boomerang. So it will start recording when it’s close to you, then it will move back and come back to you again offering great footage in which you will be the main subject.

Is another great mode for getting impressive cinematic footage, which could be almost impossible to create without using it. This mode will make the world spin around you and capture everything in a shot.

With its camera facing down, the Mavic Mini 2 will fly up to the sky, offering a similar look as recording underneath a rocket. It is another impressive feature that you can have lots of fun with.

It is a great mode, especially for travelers who want to capture an impressive panorama to different places. If you want to use the panorama mode you will have to choose between its 3 options: the Sphere panorama, 180 degree or the wide angle.  The Spherical panorama will help create a really impressive mini globe of the place where you are, the 180 degree mode will take pictures 21 photos and stick them together in order to offer a beautiful landscape and the wide angle mode will stick together more pictures for creating a larger image.

As we saw above there are many important components which were upgraded at the new Mavic Mini 2 Quadcopter comparing it to the Mavic Mini. Its camera will offer you higher quality footage, the flight experience will be not only better but also for a longer time and we can also say that due to its new software updates the Mavic Mini 2 will offer you more fun than its first version. Also the Mavic Mini quadcopter is an amazing drone which offers great features and it is also more affordable than the Mini 2. That being said, both of the drones are really impressive offering a professional experience, but as we saw above the Mavic 2 is a little more to offer.