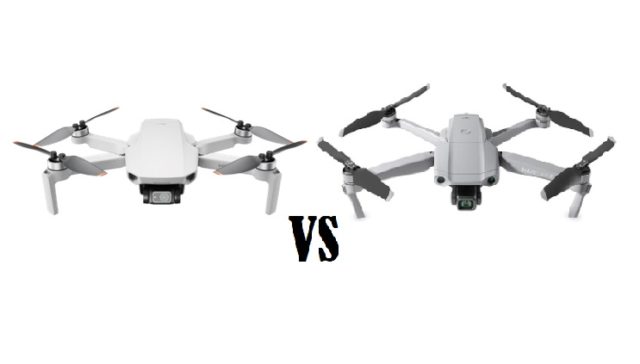 With the release of the new DJI Mavic Mini 2 and knowing almost all of its specifications, it seems to be a perfect time to compare it with another impressive DJI drone from their lineup, the DJI Mavic Air 2. By following the DJI Mini 2 vs. Mavic Air 2 article, you will get the perfect opportunity to find out everything you need to know about these two impressive professional drones. You will also discover the main aspect that makes each one of these drones unique. By knowing that, you can figure out easily, which one of them suits your needs better.

When it comes to the DJI drones’ design we can only say that it is amazing and because of that many other cheaper drones on the market are copying it. The DJI designs represent the perfect mixt between futuristic and professional offering a really impressive aspect to their drones.

The great thing which makes the DJI Mini 2 special among the other DJI drones is that it is the smallest and easiest to carry around, and because of that we can say that it is perfect not only for creating professional footage but also for the ones who enjoy flying drones as a hobby. Its design looks pretty similar to its predecessor, the DJI Mavic Mini.

Of course the Mavic Air 2 has incorporated more features, being a better drone for creating professional footage or to use it as a business tool, while the DJI Mini 2 is a drone for the ones who are looking for a small size and easy to carry drone who does not need a FAA registering.

The DJI Mini 2 offers a maximum flight time of around 31 minutes, which is a really impressive time and it also has an upgraded range of 10km, while the Mavic Air 2 features 10km video transmission range as well but it offers a longer flight time of around 34 minutes. Either way both of the drones are amazing and they offer you the ability to capture your photos and videos from the perfect angles without worrying about going out of range or running out of battery. Also if you are looking for a longer flight experience you can opt in for purchasing another battery, in that case, when the first battery runs out of power you can easily switch it with the second one and continue your flight.

The Mini 2 has a maximum speed of 57.6 km/h making it the fastest drone at its size while the Mavic Air 2 can fly as fast as 64 km/h. Both of them are built to withstand winds of around 38 km/h. The Mini 2 comes with an upgraded OcuSync 2.0 system of transmission which offers 2.4  / 5.8 GHz auto-switching which will help the drone to have a stable connection.

Another difference we can see when you are thinking about flying the drone in cold weather. You should not fly your DJI Mini 2 drone at temperatures below 0 degrees Celsius while the Mavic Air 2 can be flown as low as -10 degrees Celsius. So if you are thinking about capturing impressive footage in the winter period the Mavic Air 2 might be better for you.

Another important thing that should be taken into consideration is the Obstacle Avoidance sensors. Unfortunately the Mini 2 does not have any avoidance sensors as the Mavic Air 2 does, making your flight experience a little riskier, but it can also help you become a more precocious pilot.

Another difference between the Mavic Air 2 and the Mini 2 is their cameras. Both of them are really impressive cameras which will offer great footage to their users, but we can say that the Mavic Air 2’s camera is better because it offers Ultra HD Video. The difference between them is slightly visible because both of the drones can record 4K videos, which is a great aspect. Both of the drones feature 3-axis gimbal system which offers a great help in capturing smooth and unshaken videos and photos without any small signs of distortion.

When it comes to their slow modes of recording we can spot another difference. If you are interested in capturing slow-motion footage, the Air 2 will offer a video up to 240 frames per second, while the Mini 2 can offer it only up to 60 frames per second. Also , the Mini 2 cand shoot in 4K resolution only at 30 fps and if you want to create 60fps videos the quality will lower down to 1920p.

As we saw above both of the drones offer really impressive cameras that can be used to capture high quality footage and even if the Mavic Air 2’s camera seems to be way better than the Mini 2’s one the difference between them is slightly visible.

Which Drone Will Suit Your Needs?

Both of these two drones offer amazing features being the top drone models you can find on the market. Both off them offer an amazing flight experience being very easy to control and more than that their cameras are amazing which will help you capture the most significant moments from your life at a really impressive quality.

If you are looking for an easy to carry drone to fly it as a hobby then the DJI Mini 2 might be the perfect choice for you. And if you are looking for a more professional quality drone that you can use for business purposes as well and also a drone who resists at -10 degrees Celsius than the DJI Mavic Air 2 will be the best for you.